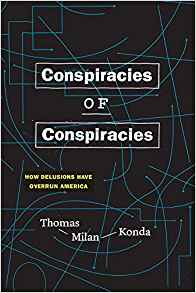 In the incredibly detailed Conspiracies of Conspiracies, Thomas Milan Konda explores the characteristics of those drawn into believing alternative realities and shows how this belief makes the world more dangerous for all of us.

According to the author, conspiracy adherents are desperate people who shape their own fears and fantasies “into a story they imbue with deeper meaning.” And the theories they grab onto tend to be underlaid by a sense of populism; believers view “elites” as the enemy of the people.

It creates a scenario of “the righteous fighting the forces of Satan,” with those who hold power taking up the mantle of evil. The “good” common people lack agency in their world, and conspiracy theories provide a reason for their powerlessness other than their own choices or poor luck.

In Konda’s reading, conspiracy theorists are disproportionately right-wing, and conspiracy theories become a toxic form of conservatism. He writes that “right-wing authoritarians have a ‘markedly negative attitude’ towards groups that deviate from their accepted norms.”

He posits that conspiracy theorists trend toward “increased religious intensity or greater acceptance of authoritarian leaders” who will promote the status quo — the way things were, are, and should remain in a godly world.

Can such people be reasoned with? No. “You cannot reason people out of positions they did not reason themselves into.” Such theorists are driven by fear, not logic. Konda quotes Richard Hofstadter in stating that such believers sport a “willful imperviousness to evidence.”

According to Konda, what lies behind this irrational fear is our government’s support for civil rights. Often, elites are seen as working to lift up an “inferior” class or group with whom they, themselves, are aligned. When you fear that you are going to lose your power, you will see as an enemy those you think are trying to take what is “rightfully yours.”

America, founded by Puritans harboring Puritan sensibilities, is particularly vulnerable to conspiracy theories. Early on, as immigration grew and new people with new ways reached our shores, there was a reaction by those who considered this their rightful home. Believers in conspiracy were “besieged by changes in society that they did not like and that threatened their position.”

This inevitably takes the form of demonizing “the other,” who are, in reality, more powerless than those propagating the outlandish theories. This is often taken to absurd extremes. Konda cites the historical fear of Catholic servants, who were suspected of having been sent by the pope to spy on their Protestant (aka heretic) bosses.

It’s heartbreaking to see how much of this remains true today. Konda points out how LIFE Magazine and television networks are accused of brainwashing and subduing America. He quotes General L.K. Smith, a proponent of such theories: “Good people...are in the majority, but they have been chloroformed, mesmerized, hypnotized and blinded by a news media that does not tell them the truth.”

In our own time, we see President Trump declaring that the mainstream media is creating “fake news.” When a respected journalist reports something that challenges Trump’s reactionary cant, conspiracy theorists tell you “that’s what they want you to think.” It is not coincidental that the conspiracist frequently uses the phrase “think for yourself,” further demonizing the mainstream media as a tool of the oppressors.

This is an interesting book that gives you a great deal to think about. Unfortunately, it is much too dense. Konda’s work is encyclopedic and includes 90 pages of endnotes — nearly 1,000 in all. This documentation comprises one-quarter of the book.

The author repeatedly quotes at length from those who came before him, which often serves as a distraction from his larger points. And what is his goal? Is he painting a broad picture of conspiracies or drawing an overarching theory? Unfortunately, any such theory gets lost in the thicket of details.

Conspiracies of Conspiracies would make a great textbook for those taking a class on conspiracy theory in American history. But for a casual reader, it comes across as a bit much.