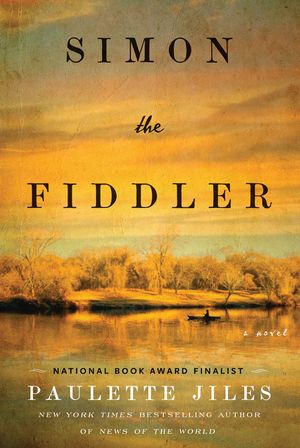 Traveling musician Simon Boudlin has evaded Civil War service right up until the final few months of the conflict, when he is conscripted into the Confederate Army. As a fiddler in a regimental band, his battle experience is limited to a single, desperate Union attack on his camp just before the Confederate surrender at Appomattox.

The 23-year-old Simon soon finds himself playing with a ragtag band made up of soldiers from both sides at a dinner for officers and their families. There, he spots Doris Dillon, an Irish indentured servant working for a Union colonel and his family. As they share a few sentences about a musical request, Simon falls instantly in love with Doris.

The following morning, she and the family leave for San Antonio. Simon and three other musicians set out on foot to perform for money first in Galveston, then Houston, Banquete, and, finally, San Antonio, losing members along the way and meeting others who, like them, are trying to carve out a postwar life. Though the band seems aimless, Simon is single-minded in his desire to reach Doris and marry her.

As she did in the National Book Award finalist News of the World, author Paulette Jiles skillfully brings the Texas landscape to life in Simon the Fiddler. As Simon travels, the reader experiences the Gulf Coast, a swampy bayou, war-damaged cities, dusty deserts, and wild settlements alongside him.

Simon’s interior landscape, however, is lacking. He does not like people, which seems at odds with his career, and he takes his friends for granted. When one of them dies, the reader is told that Simon is upset, but we can’t actually feel it. Simon seems not to fully notice what’s happening around him and rarely feels emotions, which make the reader not feel anything, either.

For the most part, the story is told through Simon’s point of view, but occasionally the author hops into another character’s head just long enough to describe Simon’s appearance or to explain how another character is feeling. This head-jumping deadens the emotional experience; the reading would have been richer had we either remained in Simon’s mind entirely or else been given more time with others.

Simon’s primary goal throughout the book is to get to (and wed) Doris, despite never having had a real conversation with her. And he assumes she’ll love him in return. Such a lopsided crush feels insufficient to propel an entire novel.

While there are episodic conflicts throughout Simon’s travels, none is big enough to make the reader worry that he might fail. Doris’ master mistreats her, but she’s bound by her three-year servitude contract and must stay on. Simon doesn’t have any money to provide for a wife, nor does he have discharge papers from the military, yet he decides to buy some land and then simply does so. These are all missed opportunities to portray real drama or danger.

Some elements of the setting and time period are touched on only briefly, which is also a shame. The months and years after the Civil War and, especially, the unique Texas setting, with its mix of cultures and landscapes, are underexplored. The riots in front of Freedman’s Bureau Offices or the lawlessness of the Nueces Strip are just two examples of elements that might have brought this world more vividly to life for the reader, but were only skimmed over.

Tension heightens and the pace picks up when Simon finally reaches San Antonio and Doris, and the relationship actually becomes believable, but it’s too little, too late. Still, fans of News of the World will enjoy learning the story of Simon and Doris (who make an appearance in that book), and also encountering the earlier novel’s protagonist, Captain Kidd, before his own story begins.

Kelli Estes is the USA Today Bestselling author of The Girl Who Wrote in Silk and Today We Go Home, which is a dual-timeline novel about a woman who disguises herself as a man to fight in the Civil War and an Army veteran today who inherits the Civil War soldier’s diary and finds similarities in her own experiences.