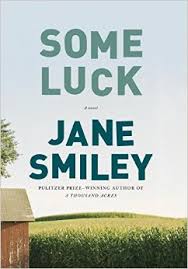 I recently came across this story online: “There once was a farmer who owned a horse. One day, it ran away. All the people in the town came to console him because of the loss. ‘Oh, I don't know,’ said the farmer, ‘maybe it's a bad thing and maybe it's not.’

“A few days later, the horse returned, accompanied by 20 more horses. The townspeople came to congratulate him: ‘Now you have a stable full of horses!’ ‘Oh, I don't know,’ said the farmer, ‘maybe it's a good thing and maybe it's not.’

“A few days later, the farmer's son was out riding one of the horses. It threw him off, breaking the son's leg. The people came to console the farmer. ‘Oh, I don't know,’ said the farmer, ‘maybe it's a bad thing and maybe it's not.’

“A few days later, the government declared war, instituted a draft, and carted off hundreds of young men — except for the farmer's son, who had a broken leg. ‘Now I know,’ said the farmer, ‘that it was a good thing my horse ran away.’”

The point of the story is that life is a series of events, and until we've reached the end of the series — life itself — it’s hard to know exactly why things are happening, or how to interpret, analyze, or judge them.

Unless we are reading a novel, that is. What we love most about fiction is that, unlike “real” life, the hand behind the events — the author — opens a metaphorical curtain or gives us a pinhole through which to sniff out themes or hear the drumbeat when something is going to be important.

But the pinhole, the curtain, and the drumbeat are gloriously, amazingly absent in Pulitzer Prize-winner Jane Smiley’s latest work, Some Luck, a Mack truck of a novel with its bulk power, proficiency, and beauty.

As in the inspirational story above, Smiley rolls out a real-time linear scheme of a narrative and puts emphasis on breadth as opposed to depth by giving all the characters narrative voice. The rotating points of view include every main character, more than a dozen, including — due, perhaps, to a little writer self-indulgence — infants and toddlers.

Rosanna and Walter Langdon, both from multi-generational Iowa farm families, marry shortly after Walter’s brief foray away from the crops during WWI. The book opens in 1920: Walter checks the fence along the creek, and the camera pulls back to a panorama of man, tree, and an owl snatching a rabbit and then languidly circling the trees with the carcass hanging from its beak. A Jamie Wyeth moment.

In fact, the book provokes comparison after comparison to the “American Gothic” oeuvre, especially for urban readers who only know about farm life from secondhand sources. The story also brings to mind “Kisses Sweeter than Wine,” a song famously sung by Jimmie Rodgers and Peter, Paul and Mary: “We had a lot of kids, trouble and pain, but O Lord, we’d do it again.”

Rosanna and Walter raise their five (surviving) children to the trope of what every parent comes to know about nurture and nature and how children grow up “because of” or “in spite of.”

Smiley manages to give a wide berth to sentimentality. Walter and Rosanna’s workaday life is onerous, and the tasks are incalculable, inviting additional comparisons, particularly to the Little House series by Laura Ingalls Wilder (with its depictions of the lonely self-sufficiency of farm life, the one-room schoolhouse, and incipient town life). The hard-earned caution about “modern” technology creeps upon the couple. To buy a tractor — or not?

Smiley does spin a few characters off the farm — to college, WWII, and even a stop at the House Un-American Activities Committee — but the homestead is the book’s anchor. It is also a place of reflection, such as during one Thanksgiving.

For her huge extended family, Rosanna has prepared a feast of turkey, rib roast, duck, 10 pounds of mashed potatoes, five pies, sweet potatoes, stuffing, and “all the Brussels sprouts left in the garden.” Her mind returns to the litany of tough moments in the house and on the farm, but, “as if on cue, Walter turned...and looked at Rosanna and they agreed in that instant: something had created itself from nothing — a dumpy old house had been filled...with twenty-three different worlds, each one of them rich and mysterious.”

The voices, the personalities, the aggregate weight of this family and their “luck” turns intimate, even elucidating. Recently, I saw a newspaper article about farmers and corn prices, and I suddenly took notice because they weren’t just “American Gothic” anymore. I knew these people. The effect was powerful.

By the time I got to the novel’s last page (set in the year 1953), I felt the way I do when a series like “Downton Abbey” ends: I am hooked, want more, and begin obsessively Googling the cast, crew, and spoiler alerts for the next season.

And, in this case, there will be a “next season”: Some Luck is the first installment of what Smiley promises will be a trilogy. Yes. Bravo. Encore. I will wait — patiently, of course, if I’ve learned anything from these abiding farm folk.

Risa Miller holds an MFA from Emerson College and is the author of two novels, Welcome to Heavenly Heights and My Before and After Life, both published by St. Martin’s Press. She is a recipient of the PEN New England “Discovery” Award and is on the fiction writing faculty at Emerson College.