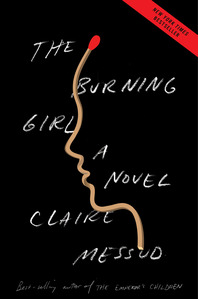 Certainly, female friendship as a subject is not new territory, not for Claire Messud and not for the literary canon. In just the last several years, we’ve seen the publication of Zadie Smith’s Swing Time, Tayari Jones’ Silver Sparrow, Emily Gould’s Friendship, Deborah Levy’s Hot Milk, and others. Of course, it’s impossible not to mention Elena Ferrante’s Neapolitan novels or, for that matter, Messud’s own The Woman Upstairs.

But to name only these is to ignore the richness and the depth of the tradition of tackling the female friendship. I am thinking now of Linda Rosenkrantz’s Talk, Charlotte Bronte’s Jane Eyre, Virginia Woolf’s Mrs. Dalloway, Toni Morrison’s Sula, and Muriel Spark’s The Girls of Slender Means, to cite only a few. The list goes on and on, and it finds a solid and confident addition in The Burning Girl.

As the promotional material tells us, “Julie and Cassie have been friends since nursery school. They have shared everything, including their desire to escape the stifling limitations of their birthplace, the quiet town of Royston, Massachusetts.” When we meet Julie, the narrator, the inevitable rift between the girls has already occurred, and Julie recounts the story of the friendship’s demise with two years’ worth of perspective.

In the early chapters, we find the evidence of the fullness of their relationship. We witness the girls as they are reckless, secretive, sincere, and vulnerable. We also understand very quickly that of the two, it’s Cassie for whom the novel must be named.

Julie, from an “intact” family, is thoughtful and more reticent. Cassie, the daughter of a single and erratic mother, is the wild child in training. But she is also the more fragile and delicate of the two, and we learn early on to worry about this burgeoning young woman’s ability to care or fend for herself. The plot, if there is one, is the slow reveal of what happens to Cassie and to the girls’ friendship. True to life, Julie is able to tell us only so much, being limited at the end of the day to her own experiences and perspectives.

I read this novel with admiration for Messud’s easy turns of phrase and clever observations. “There are the social struggles,” says Julie, “and the agonies and embarrassments of puberty (I won’t forget the mixture of triumph and pity I felt when Bridget Mulvaney flounced down the corridor tossing her famous auburn curls, with a period stain the size of a saucer on her purple gypsy skirt), and the weight of the world that falls upon each of us in varying degrees, as we finally relinquish childhood’s clouds of glory to live, ever after, in our earthly realm.” Messud succinctly captures in a single sentence a large chunk of adolescence.

I was similarly charmed by Julie’s eloquence as she sorts out the beginning of the end of her friendship with Cassie:

“It’s hard to grasp all the different things that are going on at one time, or that went on at one time. That fall, in art class, I learned about the Spanish painter Goya…and I ended up writing a paper about his life. Only much later, when we learned about the French Revolution in world history, did I realize Goya was getting going as a court painter in Madrid at the same time as Marie Antoinette was having her head chopped off. You’d never think it. Spain and France are right next to each other, but it was if he were on a different planet — in the same way that he was in seventh-grade art class for me, and the French Revolution was in ninth-grade history, and who was going to make the connection? That’s sort of what happened with Cassie and me. I guess I was Goya, just doing my thing, and she was the French Revolution.”

It is, however, this very eloquence and deftness that sometimes challenges the continuity of the book’s fictional dream. Often, I found myself aware of Messud as soothsayer, the narrator feeling at times too wise and too precise for her age or experiences. But in these moments, I was not disappointed, in part because the message was too bright and the language too good.

More than anything — more especially than a plot-driven novel — The Burning Girl strikes me as a highly refined rumination on girlhood:

“Sometimes I felt that growing up and being a girl was about learning to be afraid. Not paranoid, exactly, but always alert and aware, like checking out the exits in the movie theater or the fire escapes in a hotel. You came to know, in a way you hadn’t as a kid, that the body you inhabited was vulnerable, imperfectly fortified. On TV, in the papers, in books and movies, it isn’t ever men being raped or kidnapped or bludgeoned or dismembered or burned with acid. But in stories and crime shows and TV series and movies and in life, too, it’s going on all the time, all around you. So you learn, in your mind, that your body needs to be protected. It’s both precious and totally dispensable, depending on whom you encounter.”

It’s passages like these — and there are many — that left me breathless, contemplative, and also somewhat curious: breathless for its beautiful articulation, contemplative at its content, and curious about its (and Messud’s) true motivation.

These lines read to me as both subtle admonishment and unavoidable endorsement of books whose plotlines rotate around damaging and damaged girls. Is Messud taking the reader to task for buying into and therefore promoting this category of book? Or is she taking advantage of the motif’s ubiquitous appeal?

Regardless of how a reader chooses to answer these questions — if a reader is even inclined — there is no doubt about this novel’s merit or Messud’s virtuosity.

Hannah Pittard is the author of four novels, including Listen to Me and the forthcoming Visible Empire. She is director of the MFA Program in Creative Writing at the University of Kentucky.

The Big Green Tent: A Novel