Ships, Clocks, and Stars: The Quest for Longitude

Beautiful illustrations accompany this tale of the search for a direct route across the world’s oceans. 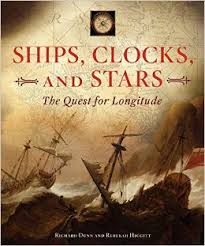 This past New Year’s Eve, as millions gathered for the 108th ball-drop in New York City’s Times Square, Americans were unwittingly participating in a ritual rooted in our maritime heritage. This technique of timekeeping — using a dropping ball to mark time — did not begin in Gotham in 1907, but rather in Greenwich, England, in 1833.

In that year, the Royal Observatory instituted a system to communicate the official time. Each day at 1 p.m., the observatory lowered a ball visible to mariners on their ships docked on London’s Thames River whereby they set their chronometers for the long voyages ahead.

Such concerns about time may seem trite to smartphone-carrying denizens of the information age. Our GPS-enabled devices provide directions to destinations and recommend attractions along the way. However, during the age of sail, the success of a voyage hinged on knowing the time and the ship’s location at sea.

Ships, Clocks, and Stars: The Quest for Longitude, by Richard Dunn and Rebekah Higgitt, commemorates the 300th anniversary of the British Navigation Act of 1714. In the 18th century, ocean travel was treacherous and costly. Mariners sought direct routes across blue water — and the payoffs they attained. However, expeditions that ventured beyond the sight of shore risked veering far off course, while sailing within sight of land hazarded piracy and losses from indirect routes.

Solutions to navigation challenges had eluded even Galileo and Sir Isaac Newton. Many master artisans and practitioners of the day also tried and failed. However, the ingenuity of John Harrison, whose first chronometer contained self-lubricating gears made of lignum vitae wood, will remind modern readers of other inventor-wizards whose persistent efforts in the midst of ordinary life changed history.

This story also pays tribute to the brilliant minds — laboring to integrate astronomical theory, applied mathematics, and mechanical clock-building — who were reduced ultimately to the “wild ravings of madmen, who fancied they had discovered perpetual motion and such like chimeras.”

For carpenters like Harrison, the challenge was personal. But for England — whose powerful ideas and scientific innovations are emphasized by the authors — the quest for longitude constituted a national priority.

An island nation, Britain depended upon maritime trade, and establishing a reliable and efficient route to its colonial interests in the West Indies required a national effort. That meant big bucks. The Longitude Act of 1714 promised £20,000 (approximately $3 million today) to the person who determined the longitudinal position to “one-half of one degree of a great circle,” or to within 30 geographical miles of accuracy.

After many prototypes, 50 years of intense competition culminated in a dramatic sea trial of three chronometers on a voyage from England to Barbados in 1763-64. The incredible results of the competition and the distribution of rewards will remind readers of other notorious government-sponsored projects on technologies ranging from atomic weapons to solar energy.

The authors produced this marvelous work in association with an exhibit of the same name at the National Maritime Museum in Greenwich, England. Ships, Clocks, and Stars benefits from the authors’ complementary talents of museum curator and professor of history. Together, Dunn and Higgitt make readers feel as if they are visiting a brilliant museum display with an expert guide.

This visually stunning volume showcases alluring maps and vivid photographs and drawings. The accessible prose conveys an historical narrative of how a major technological triumph was achieved, as well as of the scientific, operational, and political milieu of the period.

Whether called by a love of seamanship and navigation, an attraction to science and technology, or an appreciation of 18th- and 19th-century history, a wide range of readers is sure to enjoy this beautiful book.

Michael O’Hara is a Ph.D. candidate at Columbia University and an active-duty naval officer who teaches strategy and policy at the Naval War College in Newport, RI. The views expressed are his alone and not those of the Department of Defense.

Common People: In Pursuit of My Ancestors

A masterful chronicle of what it means to unearth one's past.