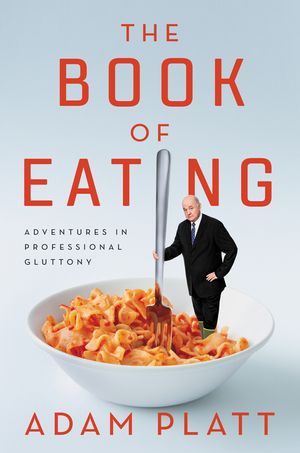 One of the most common questions we food writers get is some variation of, “What gives you the right to judge other people’s cooking?” As if to say, “We all eat, we all have taste buds. Why is your opinion more important than anyone else’s? It’s all subjective, right?”

It’s one of those queries intended to simply be inquisitive but which nonetheless feels insulting.

Adam Platt, restaurant critic for New York magazine since 2000, spends most of the first half of his new memoir, The Book of Eating, trying to justify why he deserves his job. He does this by tracing his itinerant childhood as the son of a diplomat, which involved eating a globe-spanning array of food, with an emphasis on Asia.

It’s a convincing résumé, later bolstered by a career in journalism that takes him to gigs at the New Yorker and New York Observer, as well as assignments for Esquire and Condé Nast Traveler. By the time you’re into the second half of the book — which is arranged more like a series of magazine articles than a flowing narrative — no doubt lingers that Platt is an adventurous eater with a solid palate with defined predilections — mostly “trencherman” fare, like pork chops and English rib roasts, which restaurateur Danny Meyer dubbed “Plattnip.”

What is missing is his emotional core. Memoir is a dish best served warm, but this one is often surprisingly cold. There’s much discussion of where Platt went and what he ate, but precious little about what it all meant to him. This is not a plea for Proustian gushing about every piece of dim sum he ate decades earlier, but some sense of his connection to food would have made his story more robust and engaging.

At times, Platt alludes to the massive changes disrupting both the media business and the restaurant world over the past two decades — from the decline of print journalism and the disappearance of critic anonymity (he ended up unmasking himself of the cover of New York magazine in 2014) to the rise of run-and-gun online coverage and the pervasive invasion of social media.

However, he rarely pauses to offer any thoughtful analysis of how and why this is all happening, the deeper effects it has on how chefs and restaurants present themselves, and how they’re covered by writers at every level of the food-journalism ecosystem. Given his unique vantage point in the middle of these storms, his reflections would have been welcome.

Some of the most interesting prose is Platt’s unvarnished take on the dark underbelly of his job. “The working life span of even the hardiest full-time critic is not much longer than that of a coal miner or a commercial fisherman,” he notes, before imagining how he might die.

He bemoans the aftereffects of the nonstop stream of obscenely rich meals. There are three chapters devoted to endless diets undertaken in an effort (mostly vain) to battle an expanding waistband, spiking blood-sugar levels, and eyebrow-raising cholesterol numbers. It’s sobering stuff, but he recounts these misadventures with a dry, enduring humor, making them easier for his readers to stomach.

His friendship with Josh Ozersky, the first editor of the game-changing Grub Street website, serves as a cautionary tale for anyone thinking of eating for a living. Platty (Ozersky’s nickname for him) mentions his pal’s “resolutely nonvegetarian burger and steak diet” and his love of stimulants to help make his deadlines, “including that favorite drug of jet fighter pilots and manic writers everywhere, Adderall.”

They are tight for two years before a falling out over a largely positive review Platt wrote of Michael White’s Marea (a relationship twist that could only happen in the food world and that probably verges on ridiculous to anyone outside of it). Though they mend fences, Ozersky unfortunately passes away after an epileptic seizure in a shower after living large at the James Beard Awards in 2015. He was only 47 years old.

One of the most common comments we food writers receive is some variation of, “Wow, you have the best job in the world.” Though Platt takes a few moments to revel in the glorious upsides — a Champagne-company-sponsored trip to the iconic El Bulli in Spain during its last season is a boondoggle of magnificent proportions — it’s when he’s reflecting on his career’s devastating downsides that he allows himself to be the most frank and forthright.

In those moments, The Book of Eating warms up to become an engaging memoir that transforms the unappetizing truth about professional food writing into a compelling read.

Nevin Martell is a DC-area based food and travel writer, parenting essayist, recipe developer, photographer, and author of eight books, including Red Truck Bakery Cookbook: Gold-Standard Recipes from America’s Favorite Rural Bakery. Follow him on Instagram and Twitter at @nevinmartell.