She Will Build Him a City: A Novel

This magical tale immerses us in the city of Delhi as it struggles toward the future. 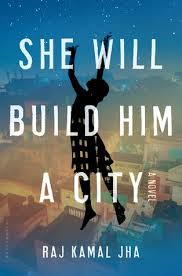 In She Will Build Him a City, Raj Kamal Jha weaves together the stories of Man, Woman and Child to create a mythology of the modern city of Delhi. Child is an orphan boy who has a loving nurse and a guardian dog. Woman prays for her troubled daughter to return by retelling a history of their lives together. Man falls prey to his own first victim as her ghost prompts him to kill again. The lives of Man, Woman, and Child touch countless other lives and the story expands until the reader comes to know Jha’s troubled city of Delhi.

The novel is full of magic, both whimsical and malicious. A 12-foot-tall woman strides through Woman’s house, bringing comfort or death or both. Toddlers converge on the new glittering mall at night and pass through the glass doors into air-conditioned comfort. Orphan rides his guardian dog to a sanctuary. A boy is reincarnated as a cockroach when his mother prays for him to stay on their family farm. The ghost of a young girl with a red balloon whispers in the ear of a serial killer.

The girl with the red balloon is a slightly off-key note in Jha’s beautiful tale. Somewhere along the way — from Marquez, Helprin, Allende, and Esquivel — I unwittingly absorbed the idea that magical realism should be benevolent, just, or at least dispassionate. Magical realism opens the mind to our mysterious and complex world. Much of Jha’s novel does just that. But the girl with the red balloon violates the subtle agreement between the author and reader. She is a serial killer’s hallucination: un-mysterious and disappointing.

Still, Jha is masterful. He uses a light hand to make the gut-wrenching disparities between the rich and the poor impossible to ignore. The rich residents isolate themselves in New City and adopt a Western lifestyle. They do their best to ignore the poor: “He cannot avoid the flies, just as he cannot avoid the poor,” Man thinks. He seems unable to understand why the poor would want to live: “They even look like the dead, many of their faces half-eaten by disease.”

A huge neon sign near the airport declares: “We Are Building a New India.” Meanwhile, in the old city, poor families sleep in shifts in their one-room shacks, water and power are scarce, healthcare is a fantasy, and children work instead of attending school.

The proximity of extreme poverty makes Western values seem breathtakingly absurd. One woman in New City, attempting to lose weight before her wedding, lies on her bed “in yellow shorts and a white t-shirt, without sleeves, some of her fat already cross-trained and treadmilled away.”

Simultaneously, in the old city, an aspiring nurse lies in her family’s shack, dying of tuberculosis. “Shriveled, she almost disappears under her thin white sheet.” Her illness means economic disaster for the family; her death would save them.

The two populations rarely intersect in real life, but when they do, the results are unpredictable. A kindly doctor buys food for a dying girl with the money that he would normally spend on coffee. A television news anchor passes over one boy brimming with potential and instead adopts a profoundly handicapped special-needs child.

A madman is free to kill with impunity. The rich are like minor gods who stroll among the poor population at will, sprinkling blessings or tragedy, heedless of the ways they affect the tiny lives around them. One of the points of the novel is, of course, that the rich and the poor can never really be separated.

Jha’s novel documents ghosts: the ruined, the displaced, people doomed before they begin, and people who never were. I haven’t visited Delhi, but if I saw it now, I know that Jha’s ghosts would haunt the edges of my vision. His sense of the city’s inevitable fate would travel with me, too. The injustices in the novel gather like storm clouds, suggesting a catastrophic reckoning in Delhi’s future.

Erin Elliott is a lifelong voracious reader and is currently studying writing. She’s been thoroughly exposed to the magic in our universe through her engineering work on the James Webb and Hubble space telescopes.

This debut novel creates a dazzling (if damp) future with ethereal inhabitants.