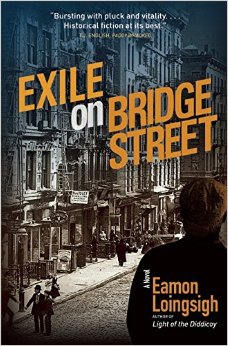 In 1916, 15-year-old William Garrity comes to America alone, leaving his father, mother, two sisters, and a brother back home in Ireland. Effectively orphaned, he’s taken in by longshoremen boss Dinny Meehan and trained by the tough men who fight for dominance over working territories at the docks in New York in the days when gangs dictated who worked where.

When Eamon Loingsigh’s novel begins, William has already killed a man, his uncle, at Dinny’s instruction. His uncle, a leading figure in the gang, would have sold their territory out to the union, the ILA, a faction that would have offered their people as pawns to government and officials in high places. Guilt-ridden and resentful, William swears he will never kill another man.

He fights to free himself of his affiliation with Dinny, but it’s too late. Threats hover over William when he tries to leave, and he realizes his dependence on Dinny is more than he can tackle.

Dinny’s a man of his word and he takes care of their Irishtown neighborhood. He ensures the workers survive; that they eat and have a warm place to stay; and that their families are taken care of, particularly in the cold Brooklyn winters. When William learns of Ireland’s Easter Rising and the plight of his family in County Clare, Dinny promises to bring his mother and sisters to America.

But his promises come with stipulations. The gang’s enemies are a constant threat; the rich- man’s union has utter disregard for the Irish workers, and other longshoremen seek power. No one’s life is safe, and William is entrusted to defend their district.

In his beautiful, passionate prose, Loingsigh — an Irishman himself — continually reminds us of the motherland and the suffering of Irish emigrants. A step off the coffin ships of Thomas Gallagher’s Paddy’s Lament, Exile on Bridge Street fast-forwards the reader into the personal lives of sons and grandsons of those immigrants, reliving the struggles, angst, fears, and triumphs of men fighting to make something of their lives when they had nothing, and when their parents had even less.

“The events of April 1916 both in Brooklyn and back home in Ireland give me to thinking the world a violent place where the poor are ignored, put to use in labor, or reviled for their plaints,” writes the author in one passage. “Made to fight amongst themselves for the right to charge tribute like some underground unknown struggle.”

Exile on Bridge Street is a gangster story that reads more like “Robin Hood” than The Godfather because of these men’s inner strength and the love they have for each other. The novel is the passionate tale of a young man who wants nothing more than to be reunited with his family defending his homeland, and yet cannot return.

It’s also an intimate look at criminals whose lives have been hardened by oppression and weathered by storms, while inside their rough shells they hide soft hearts. Their pasts haunt them with violence and despair, and yet these men hope for a brighter future, one they believe hard work, sweat, and sacrifice will bring them.

One cannot help but be moved by their striving for a better life.

“I look, but only see branches frozen and swaying hungrily in the winter-gray backdrop. Brown ice and muddy snow accumulate at the edge of rooftops and quoins, but just beyond I can see the tops of the trees, their beauty distant and only made true by imagining them. Hibernating in the darkness of now with nothing but hope and flights of fancy to make them real.”

Dianne Gardner is an award-winning author, screenwriter, and artist located in the Pacific Northwest.

The Tell-Tale Heart: A Novel

By interweaving the stories of an organ donor and recipient, this book reveals the deep interconnection between people.