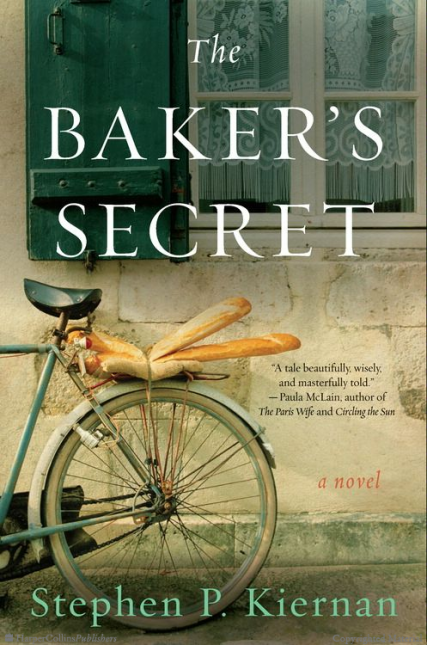 Stephen P. Kiernan’s compelling World War II novel, The Baker’s Secret, takes place in a small coastal village in Normandy on the eve of D-Day. Emma, only 22, has learned to bake through an apprenticeship with Ezra, a master of the trade. Under the German occupation, the Nazi Kommandant has ordered Emma to bake exactly 12 loaves of bread each day for his soldiers.

Food is scarce, and her fellow villagers are going hungry. By combining the flour with ground straw, Emma finds a way to stretch the daily ration of ingredients to create two extra loaves for those who need it most.

Emma suffers unimaginable losses: She watches as her mentor, a Jewish man, is dragged from his store and shot before her eyes. Soon after, she loses her love, Phillipe, who is ordered to present for conscription. Her father is taken away, leaving Emma alone with her grandmother, Mémé. But even as Emma witnesses the immense cruelty around her, her resolve strengthens and she finds a way to fight back.

There is palpable tension as Ezra’s killer, Captain Thalheim, moves into Emma’s home and unfurls the Nazi flag outside. Emma wrestles with her hatred of Thalheim and her need to survive by “mastering the art of satisfying a man while deceiving him.”

Brave, pragmatic, and defiant, Emma creates an underground network to help and feed those around her by bartering — and occasionally stealing, but “only from those who supported the occupying army.” She learns to make deals and gains the trust of the villagers, bringing them sustenance and hope.

When the Nazi captain starts uncovering the clandestine network, it takes all of Emma’s courage to persevere in the face of likely execution.

This thought-provoking novel is both heart-wrenching and inspiring. While addressing the horrors of war, it also portrays the resilience that is deep within all of us. It speaks to the innate need to have a purpose in life and to be able to hold onto the dream for a better future. For Emma, that dream is “to keep as many people alive as possible.”

There are moments when readers might wonder what really drives her, because she has no faith in being rescued by the Allies. When someone mentions enduring “until the liberators come,” she says, “They will never come.” Her unwillingness to acknowledge the possibility of rescue reflects her pragmatism; sentimentality is a luxury in wartime.

In The Baker’s Secret, Kiernan has created characters who are well-developed, beautifully flawed, and unforgettable. Yes, it’s a story of tragedy, but it’s also one of love, endurance, and, ultimately, redemption.

Tania Heller, M.D., is an independent medical-school admissions consultant and the author of five books, including On Becoming a Doctor (Sourcebooks) and You and Your Doctor (McFarland). She is currently co-authoring a novel with her father, Izzy Heller.

Husband-and-wife attorneys find themselves embroiled in fraud, deceit, and murder in this descriptive but poorly plotted novel.