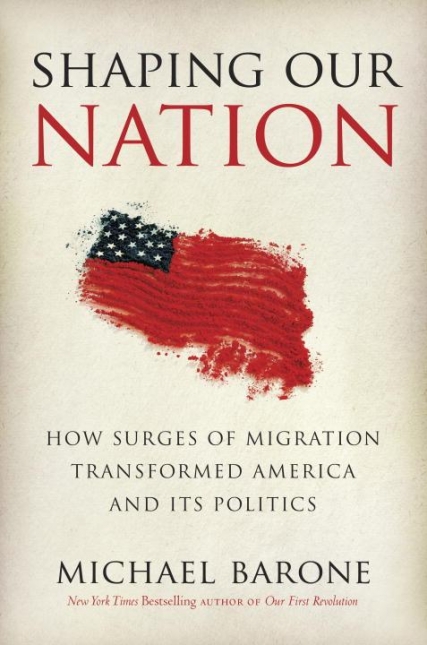 The fact that the United States has struggled with immigration since its founding is often lost in the demagoguery of mile-high barbed-wire fences at American borders and 30-second pitches calling for more H1-B visas from Mark Zuckerberg’s Fwd.us political action committee. In Shaping Our Nation: How Surges of Migration Transformed America and Its Politics, Michael Barone, however, reminds readers of the immigration history of the United States and reveals how, from the pioneering, agrarian Scots-Irish in the 18th century to the industrious Asian waves of the late 20th century, each successive group of immigrants radically changed the identity of the country, much to the surprise of the peoples previously settled here.

Barone has been an astute observer of these changes. A respected resident fellow at the conservative American Enterprise Institute and a prolific pundit featured in the Washington Examiner and on Fox News, Barone has long advocated for more sensible immigration policies built on lessons learned from previous migrations — by choice or otherwise — of peoples into this country and focused on limited legalization, reasonable enforcement restrictions and increased access to foreign high-skilled labor.

Shaping Our Nation is most entertaining when exposing major historical events in a new light. For instance, Barone paints the Civil War as the culmination of a simmering feud between the expanding “Yankee diaspora” in the North and stymied elites in the South. New Englanders brought a moralistic and reformist style of governance to the country and zeal to export such ideology to the West and South. Aided by surging sympathetic German populations, Northerners eventually defeated the ruling parties of the South (who recruited the Scots-Irish to the cause but could not convince the Irish to join them). Victory led to the “Yankee conquest of North America,” which resulted in a widespread distribution of Northern ideas throughout the nation (e.g., universities, libraries, preparatory schools, etc.).

World War II, in contrast, actually unified the country’s fragmented populations. Prior to World War II, the United States was staunchly divided: Foreign immigrants mainly resided in large coastal cities (within their own ethnic enclaves), and over three-fourths of American blacks lived in the segregated South. By the end of the Depression in the 1930s, Barone posits that there was so little movement between peoples that the United States witnessed its lowest population growth and social mobility rates in its entire history. World War II, however, led to two massive migrations. First, one-third of American blacks moved to the large Northern cities to fill the jobs of those drafted in the military and created new lives that were intertwined with white and immigrant communities. Second, millions of Northerners of all backgrounds fled the cold winters to join the growing military, oil, farming and aviation industries in sunny California.

While Barone includes many novel insights during his journey through the immigrant history of the United States, he, unfortunately, places many of these insights between banal details of population shifts and changes in voting patterns. Shaping Our Nation, then, lacks compelling, rich stories of the regular people who risked life and security to reach our borders.

At times, the book can read like a college textbook rather than a historical narrative. For example, in its closing chapter, Shaping Our Nation goes into great detail about the geographic patterns of recent immigration from Latin America and Asia without much context, and groups are not disaggregated to provide a nuanced look into the migration drivers for various particular peoples (e.g., Mexican immigrants versus Honduran immigrants). Instead, increases in Latin American immigrants — who filled Los Angeles, Houston and Miami — are explained away through foreign currency devaluations, corrupt governing party regulations and slowing economic conditions in their home countries. Similarly, Barone explains Asian immigrants’ presence, primarily on the coasts, through loosened federal immigration policy following the repeal of the Chinese Exclusion Act or political compromise such as Roosevelt’s Gentleman’s Agreement of 1907. Rather than delve into the various groups’ cultural impact in different areas, Barone describes their traveling patterns: for example, Chinese families moving to California in record number and now composing 21 percent of San Francisco, Calif.

The impact of these recent migrations has yet to be analyzed, so it would have been useful to get a better understanding of how Barone forecasts these groups’ migration patterns, cultural impact and even electoral impact. Such information would have added to the heft of Shaping Our Nation and allowed it to be part of the broader discussion underlying federal immigration policy negotiations.

Despite its limitations, Shaping Our Nation is a solid attempt at reviewing the major implications of migration waves over the course of American history. Best suited for students of history and policymakers embroiled in the immigration policy debate, Shaping Our Nation provides an honest, objective look at immigrant contributions to modern-day political, economic and geographic boundaries.

Bharath Parthasarathy is an attorney living in Atlanta, Georgia.