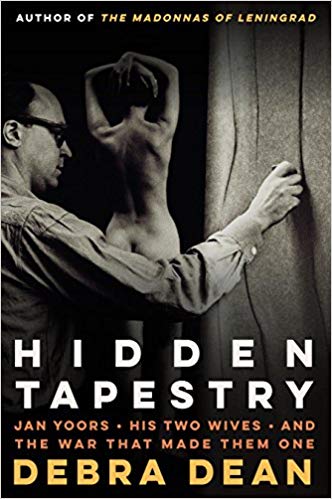 Biographers rely on personal letters, journals, interviews, and autobiographies to fill out a person’s life. But when your subject is the Flemish-American artist Jan Yoors, who consistently concocted tales of his life and, following the exigencies of war, assumed fake identities, the task is daunting.

Fortunately, author Debra Dean could turn to family interviews, journals, and letters, plus Michael Korda, Yoors’ editor, to separate fact from the fantastical in this richly detailed and absorbing portrayal of an artist whose personal life is tightly woven into his tapestry.

Hidden Tapestry is divided into two parts: War and Utopia. Dean begins with the fateful meeting of Yoors, age 12, and Annabert van Wettum, age 7, at a summer camp in the Netherlands in 1935. By the end of a two-week stay, he promises that, one day, she would be his wife. A smitten Annabert returns to Antwerp while Yoors goes to his Belgium home. But from that unlikely beginning, they embark on an epistolary relationship that lasts nine years.

The son of a stained-glass artist and an activist, Yoors shortly thereafter takes up with the Romani, who embrace him. (While Dean uses “Gypsy” interchangeably with Romani or Rom, I will refrain from using the term, which some find pejorative.)

His parents do not seem to mind his annual months-long absences. His letter-writing to Annabert becomes sporadic; when he does write, he boasts about his schoolwork and his travels — all fabricated.

“His fibs to Annabert were cover for a real-life adventure every bit as improbable as the lies,” Dean writes.

When war breaks out, Yoors joins the Resistance and convinces the Rom to participate in the war effort. His knowledge of several languages plus false identity papers help him evade the Germans to facilitate refugees’ escape to Spain.

The Rom’s peripatetic ways provide cover for delivering rations and other supplies all over Europe. Having observed Rom fortunetellers feed people what they think they want to hear, Yoors does the same anytime he is interrogated, throwing in dates and minor details to make it all seem true. Hallucinations of his father’s stained-glass cathedral windows help him survive imprisonment.

Meanwhile, the Germans are bombing and invading the Netherlands. Annabert, who is Dutch but not Jewish, is shielded somewhat from the war. She attends school and goes on holiday with family.

However, her childhood friend Marianne Citroen cannot escape war trauma. Marianne’s Jewish father must go into hiding. (Because her deceased mother was not Jewish, she herself is not considered a Jew, according to Jewish law.) Marianne’s father places her under the temporary care of a couple. Though not in hiding, she still must endure food shortages, sickness, bombings, loss, occupation, and more. She also had to move often.

Throughout the book, Dean dips into the history of World War II in perfect doses — enough for the reader to gain a feel for the lived experiences of Yoors, Annabert, and Marianne without bogging down the story. Her riveting descriptions breathe life into events that many of us are familiar with. Like an artful documentarian, Dean whisks us from the panorama of wartime to close-ups of our main characters, each trying to survive. Because of Dean’s ability to balance the narrative, I found myself caught up in each of their lives, wondering how the three would come together.

At the war’s end, Yoors stops by Annabert’s grandmother’s home, where he is told she is at a festival. It’s been 10 years since she has last seen her “soulmate.” Amazingly, they marry and move to England, where Yoors’ parents live. There, a tapestry exhibit at the Victoria and Albert Museum sparks his creativity.

When the couple sets up house in New York City’s Greenwich Village during bohemians’ second wave in 1951, they pursue tapestry-making. Marianne later joins them by getting a work visa as a nanny for the Yoors’ newborn son.

Inklings of having a polyamorous relationship start to percolate in Yoors’ mind, and Marianne finds herself falling for him. From there, the three embark upon an unusual domestic and artistic arrangement.

They settle into a routine: Yoors designs tapestries on paper. On a loom that dominates their living space, the two women, dressed in Romani-like garb of modest long skirts and dark hose, spend their non-work hours weaving tapestries as large as 90 square feet. Yoors occasionally joins in. Throughout the process, the three collaborate.

Dean wisely stays away from speculation about their domestic situation, nor does she overreach in her observations. She sticks to her research. Dean notes that the women rarely challenged Yoors. However, Marianne became more discontented with the polyamorous relationship, plus Yoors’ affairs, with each passing year. Utopia, it wasn’t.

Since the death of Annabert in 2010, Marianne and her son, Kore, are keeping Yoors’ artistic legacy alive. Unfortunately, all photos in the book are in black and white. Until the rare exhibit of tapestries, including those by Yoors, occurs, you’ll have to turn to the internet to appreciate the magnificence of his work.

Dean elevates what could have been a salacious story about polyamory into a deep look at an artist’s work and life, enriching it with vivid accounts of historical, social, and cultural events and context, adding journal entries and letters in the right places. The chapters alternate between Annabert, Yoors, and Marianne, all without ever losing the thread of the main story.

Dean has written three works of fiction, including The Madonnas of Leningrad, which was a New York Times Editors’ Choice. In this, her first nonfiction book, she puts her storytelling skills to great use, keeping the engine of the narrative moving.

Delia Cabe, who grew up in Manhattan and attended grade school two blocks from the Yoors’ home in Greenwich Village but never met them, is the author of Storied Bars of New York: Where Literary Luminaries Go to Drink (Countryman Press, 2017).