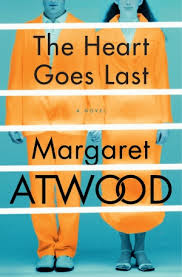 Leave it to Margaret Atwood to blend an ingenious (albeit dubious) solution to the spate of joblessness and homelessness produced by the 2008 economic collapse with a mixture of sexual fantasies, mate-switching, sexbots, a 21st-century equivalent to the love potion, futuristic neurosurgery, a resourceful twist on timeshares, and surveillance of everyday activities (a whiff of The Handmaid’s Tale).

And these are just for starters.

As you’ll note, a fair number of the items in this list concern sex, on which there is a significant emphasis in The Heart Goes Last. But first, alert readers will note the epigraphs that precede the narrative, all three of which concern lovers’ confusion about their partners, whether real, imposter, or artificial. To quote the briefest epigraph, from A Midsummer Night’s Dream, Shakespeare cautions that:

“Lovers and madmen have such seething brains,
Such shaping fantasies, that apprehend
More than cool reason ever comprehends.”

Atwood herself is at her most Puckish in this, her 15th novel, which is filled to the brim with antic lovers and their stand-ins, seething brains, fantasies, mischief, and other inventive plot machinations.

In the beginning, previously middle-class couple Charmaine and Stan are jobless and homeless in an unspecified location (presumably somewhere in the northeastern U.S.), reduced to living in their third-hand Honda after the housing bubble burst and they lost their home.

They mourn the comfortable life they took for granted before such harsh developments as 40-percent unemployment and the rampant foreclosures that not only flipped their home but flipped their lives upside-down. Their fears of street people and of having to scavenge for food, along with their distress about the future, make them ideal candidates for a unique social experiment called the Positron Project in the new community of Consilience.

The unusual premise of the planned community is that “if prisons were scaled out and handled rationally, they could be win-win viable economic units. So many jobs could be spawned by them: construction jobs, maintenance jobs, cleaning jobs, guard jobs…an everflowing cornucopia of jobs. Medium-size towns with large penitentiaries could maintain themselves, and the people inside such towns could live in middle-class comfort…And if every citizen were either a guard or a prisoner, the result would be full employment.”

Or, as the promotional video enthuses, “DO TIME NOW, BUY TIME FOR OUR FUTURE!”

During their months as inmates, residents of Positron/Consilience perform mundane tasks — such as overseeing the chickens being raised for the self-sufficient community’s consumption or folding towels from the laundry — and enjoy no civil liberties. During their alternating months “out,” they live in comfortable residences and have more dignified jobs, but not much more personal freedom.

In defense of the set-up, the CEO and pitchman jests that “you can’t eat your so-called individual liberties.” Stan and Charmaine are so desperate for personal and financial security that they ignore several warning signs — the “cons” in Consilience are not accidental — including the fact that commitment to the Positron Project is irreversible. They join up much as one might sign on for a timeshare — without noticing there’s no escape clause — and soon become eager residents of the community.

If you think the ethos of Positron/Consilience — “to recognize the greater good and to choose the lesser evil” — has a subversive ring to it, you are correct. The “lesser evil” is what drives the multiple twists and turns of the plot. During the Positron (prison) months, Charmaine serves as chief medications administrator in the prison hospital. Her tasks include administering a “Special Procedure” that is too pivotal to the plot to describe here.

Charmaine and Stan aren’t the only ones with more than one side. Virtually every major character in the story is also someone else with a different name. The dual community itself has a dark side: Nefarious and even outrageous schemes generate income for an invisible power elite.

As events escalate toward the “Help, get me out of here!” climax, complications unspool at a dizzying pace, featuring, among other developments, not only multiple Elvis impersonators but their sexbot replicas. There’s also a faked death and several other over-the-top events, many of which unfold, appropriately enough, in that city of money-driven artifice and performance, Las Vegas.

Some readers may find not to their taste Atwood’s exaggerated, madcap, occasionally lewd tale of mismatched lovers, Prostibots (“replica women slut machines”), and other forms of fakery and deception. However, the author (almost) never fails to entertain through her sardonic wit and amusing play with language and plot.

While the foul-mouthed Stan swears like the proverbial sailor, the prim Charmaine’s strongest expletive — expressed only to herself — is “darn it to heck.” Charmaine occasionally hears in her head the voice of her conventional Grandma Win, who spouts such truisms as, “What can’t be cured must be endured.”

In the other ear, so to speak, a different voice challenges her to reflect more skeptically on her actions. While she is finishing her lunch one day, that voice asks about her prison job, “Are you having qualms, Charmaine?” to which she answers, “No, silly … I’m having dessert. Plum crumble.”

Lest you conclude that The Heart Goes Last is simply a comic romp with salacious twists, I should mention that a couple of serious themes emerge over the course of the story. First, a major female character asks Stan, “Do you believe in free will?” The question resonates throughout the novel, beginning with Charmaine and Stan’s binding surrender to a too-good-to-be-true alternative to extended homelessness and financial ruin.

Secondly, underlying the sexual shenanigans that animate the plot is Atwood’s exploration of a core human desire. This is the wish that romantic couplings be anchored by something more durable than — or, as the novel impishly suggests, in addition to — fantastic sex: true love. At least in The Heart Goes Last, all’s well that ends well.

Roberta Rubenstein is a professor of literature at American University, where she teaches courses on modern and contemporary writers, including Margaret Atwood. Her recent books are Literary Half-Lives: Doris Lessing, Clancy Sigal, and Roman à Clef (Palgrave Macmillan, 2014) and The Golden Notebook After Fifty, a collection of essays coedited with Alice Ridout and Sandra Singer (Palgrave Macmillan, 2015).

By Matt Taibbi and “Anonymous”