There's no closure in this fictionalized account of a real-life tragic figure. 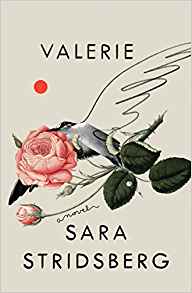 The story of Valerie Solanas, as reimagined by Sara Stridsberg in her novel Valerie, lacks a happy ending. This is not a spoiler. Her death, which is described in prologue form before the table of contents, makes for an unpleasant first scene.

Solanas is found “on a filthy mattress and urine-soaked sheets” in a seedy hotel in San Francisco in April 1988, her body “covered with maggots.” The police think she has been dead for five days.

It is a tragic end to a tragic life. And it is the beginning of this beautifully written but ultimately frustrating work of fiction by Stridsberg, who inserts herself into the book as the narrator, a writer working on a novel about Solanas who spends time with the infamous figure in her final days:

“I imagine piles of paper on the desk, her silver coat hanger by the window, and the smell of salt from the Pacific. I imagine Valerie in bed with a fever, attempting to smoke and make notes. I picture drafts and manuscripts all over the room…sun, perhaps…white clouds…the desert’s solitude…I imagine myself there with Valerie.”

Valerie is complicated by the fact that Solanas was a real person who obtained celebrity status in the late 1960s when she attempted to assassinate Andy Warhol. Before the shooting, she had been one of the many satellites in Warhol’s orbit, acting in a couple of his films and trying to convince him to produce her one finished play.

Solanas was also known for having written the SCUM Manifesto, a self-published radical-feminist work that argued for the violent culling of men from the population. (SCUM stands for Society for Cutting Up Men.) Its gleefully unhinged style led many to debate whether it was the work of a brilliant satirist, a psychotic schizophrenic, or someone hovering between the two.

What is certain is that her writing stemmed from a long history of abusive relationships with men, including being sexually assaulted by her father as a young girl.

In a prologue to the prologue, Stridsberg stresses that this is a work of fiction and that even the character of “Valerie Solanas” should not be confused with the real person. But in reading the book, which jumps back and forth in time through nearly a hundred short chapters, it’s hard not to feel that some knowledge of Solanas’ life is necessary to understand Stridsberg’s fascination with her.

The character of Solanas is worshipped, her brilliance extolled, by a string of companions throughout this novel, but, to some extent, Solanas herself is kept at arm’s length from the reader. We are expected to accept her literary prowess without being allowed a view of her creative process.

Stridsberg also seems conflicted as to whether we should believe that Solanas’ callous attitude toward those who care about her, along with her penchant for self-destruction, was a product of a horrific past or a deeper mental illness.

Stridsberg is not the first person to find herself drawn to Solanas. The woman’s life was previously portrayed in the powerful Mary Harron movie, “I Shot Andy Warhol,” with Lili Taylor fiercely embodying the role. More recently and irreverently, Lena Dunham played a more sensationalistic version of Solanas in the Ryan Murphy series “American Horror Story,” in which her manifesto is credited with inciting the Zodiac murders (which is likely more conspiracy theory than reality).

There is certainly something about Solanas, as fleeting as her moment in the American consciousness may have been, that continues to inspire artists to deconstruct her legacy.

But, in the end, Solanas is inscrutable. She left very little behind. Her mother burned all her papers after her death. And her life was filled with endless contradictions and bad decisions.

Stridsberg, despite claiming liberties, is trapped by a need to be faithful to the maddening trajectory of Solanas’ life. The fragmented mind of the subject leads naturally to a fragmented novel. “I wish the story had a different ending,” the narrator says at one point. “I wish there were happy endings.” That is the same sentiment the reader feels at the end of this sad and arresting novel.

Mothers and Other Strangers: A Novel

Turns out, the mad captain of the Pequod didn’t go down with the ship after all...