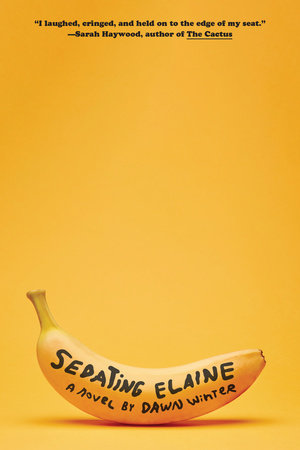 In her debut novel, Sedating Elaine, Dawn Winter accomplishes a remarkable feat: She makes an infuriatingly foolish protagonist with specific problems — and specific ideas about how to solve them — into a character who inspires compassion and gives voice to poignant truths.

It would be hard to imagine Frances making worse choices. She is quite often quite drunk, and she owes thousands (in pounds sterling, as the setting for her travails is London) to a drug dealer given to turning over those in his debt to a collector who does horrifying things with a straightening iron as punishment for falling behind on payments.

Into this tense mix comes Frances’ wealthy new girlfriend, Elaine, quite possibly one of the most annoying figures in literature, and that includes Uriah Heep. Elaine frequently calls her beloved “Funny Frances,” a moniker which reads as grating when repeated too often. (Like, twice.) And Elaine adores Frances, which she expresses with intrusive, near-constant outbursts of lust. Enough being way too much, Frances has been thinking of dumping Elaine.

Of course, if she instead asks Elaine to move in and then charges as the first month’s rent the exact amount Frances owes her dealer? Voila! Ticking-clock problem (full settlement of all debts in one week or else) solved!

What could go wrong?

Elaine invades Frances’ small apartment with huge amounts of stuff. And it’s not just the objects that are overwhelming. Elaine wants to spend every moment glued to Frances — torture for someone who has something of a misanthropic streak about her. How is Frances going to survive the five days it will take for Elaine’s rent money to be transferred to her own account?

Wait, here’s an idea! She can ask her dealer for a little something to thrust Elaine into catatonia until Frances can settle her debts and chuck the other woman out.

Again, what could go wrong? Needless to say, a whole lot.

Luckily for Frances, she’s being directed by an author who knows how to engender a great deal of empathy for her leading lady. Frances’ mother abandoned her when Frances was young. Her childhood was further haunted by a tragedy for which she feels responsible. And she was devastated when the love of her life dumped her not long ago.

And so it makes sense that, for Frances, the numbness brought on by booze and drugs brings peace, because “the two had become synonymous.” Knowing this, readers may find themselves wishing Elaine would just pass out already and give Frances a break.

Funny secondary characters and situations elevate the novel. Elaine’s mother shows up unannounced — after Elaine has finally been knocked out — and manages to be even more insufferable than her daughter:

“She turned on her heel and marched in the direction of the living room, visibly curling her nose up against the smell, wafting her gloved hand in front of her face and clutching her bag even tighter against the likelihood of thieves and ruffians.”

When Elaine’s mother returns later with her husband to show him how dreadful their daughter’s new living situation is, author Winter renders the meeker mate in a perfect flash of images: “He was a tall man but he had the posture of one who has spent a lifetime being backed into corners…His Adam’s apple poked out like an item he’d choked on but had gotten used to.”

The night Frances’ boss at her restaurant job (where she works in the kitchen to hide from the world) needs her to wait tables is the same night Frances’ ex-girlfriend shows up for dinner with a table of admirers. Earlier that same day, Frances nearly drowns during a visit to the seaside but can’t get home to rinse the saltwater out of her Medusa hair before work.

And the physician Frances goes to see more than once out of desperation (“I literally have no one else to talk to”) is himself a hapless soul who keeps wanting to prescribe pills for her problems but who also shares surprisingly affecting encouragement:

This is just one example of Winter reaching readers with specific reminders about universal experiences. Elaine is, on many levels, every person stubbornly lacking self-awareness. And who hasn’t experienced the anguish of a breakup and felt the pain of seeing the “huge space the size of a coffin in the wardrobe where her clothes had hung”?

As all authors must, Winter chooses what information to share and what to withhold. Thus, while there are extensive insights into Frances’ inner life (“She had never been able to abide the thought of pregnancy. Birth, she imagined, would for her be the easy part, like the relief of a huge pustule finally bursting and all the stuff oozing out.”), there’s not much about why her mother left. Such creative choices will appeal to some readers even as they leave others unsatisfied.

While avoiding spoilers, it’s worth noting that the author manages — with just a few carefully crafted sentences — to create a moving transformation (in readers’ perception of the character as much as in the actual character) in a prominent figure in her story. Savoring how she does it and savoring the succinct makeover itself are just two of the myriad reasons to read Sedating Elaine.

A sluggishly paced thriller that suffers, in part, from its own immense scope.