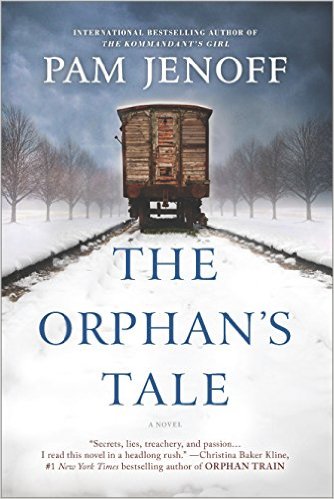 Pam Jenoff is known for her historical fiction set during World War II. In her newest novel, The Orphan’s Tale, she works her style in and around a rather nuanced subject: the circus.

The story centers on two protagonists, a young Dutch girl named Noa and a Jewish trapeze artist called Astrid. After running away from home, Noa works a menial job at a train station in Germany. When she discovers a train car filled with Jewish infants, Noa’s instincts take over and a decision is made: She reaches for the baby boy closest to her, one of the only ones still alive, and runs.

Winter is as unforgiving for Noa as it was for the boxcar of children; just when she thinks she’s failed herself and this child she’s rescued, she is rescued herself by a member of the nearby traveling circus. And then the world opens up before her.

She meets Astrid, a middle-aged, petite picture of grace, strength, and perfection. She and all the members of the circus, including the ringleader, Herr Neuhoff, and Astrid’s partner, Peter, a Russian clown, reflect years of hardship and suffering from the lifestyle of traveling, rehearsing, and performing. Added now is the constant stress of war and ever-present military personnel.

Astrid is assigned the task of training Noa to be an aerialist. In exchange for performing, Noa and the baby, whom she names Theo and claims is her brother, are allowed to stay. While Noa is hesitant and unprepared, she has no other place to go, so she begins training. She does not see herself as a true member of the circus, and neither do the other performers, artists who devote their lives to their craft and know no other kind of existence.

This clashing of worlds in the face of societal pressures is what makes Jenoff’s story come alive. Noa and Astrid learn to see past their differences and become as close as sisters, though each has her own history that she does not reveal to the other. Secrets build, reminding the reader that they are going to be brought to light before the closing act. Jenoff’s dueling narration between Noa and Astrid allows each character to carry the story forward in a setting where individual voices can at times become lost beneath the volume of circus performers.

Indeed, the foundation of the circus, the idea that there is never any privacy in this traveling family, is what makes the secrets that Noa and Astrid do manage to keep so integral to the story. The circus serves as a propeller of plot and character development even more than the war raging around them. This is partly due to the fact that the circus is a unique subject that grabs our immediate interest.

Jenoff is no stranger to details of World War II Germany. Her background as a diplomat for the State Department covering Holocaust issues in Poland, not to mention her degrees in international diplomacy and history, make her perfect for this job. Yet she describes this book as the hardest she has ever written due to the incredibly dark subject matter. The Orphan’s Tale is based partly on the true events of the account of the Unknown Children, a boxcar full of babies headed for a concentration camp, as well as the Circus Althoff, that hid Jews during the war.

For Astrid, the circus is all she has ever known. When they arrive at a town in France and are taking part in the welcoming parade, she realizes that Noa finally understands as well, though never the same way she will: “Adults watch us with the wonder of children. The circus had always brought light to the places it visited. Now, it is a lifeline.”

Astrid’s greatest fear is that the war will dissolve her life and take away her one unreplaceable joy. At the same parade, she questions their existence: “Though no one speaks of it, I sometimes wonder if we are marching toward extinction with each performance, too busy dancing and flying through the air to see it.” Despite the world falling apart around her, Astrid still believes.

The Orphan’s Tale doesn’t only refer to baby Theo; it calls out to the orphan in Noa and in Astrid, as well as to the orphan in all of us who have to keep putting one foot in front of the other when all else fails. But between these moments of suspense, terror, and heartbreak, Jenoff lets the light of joy shine through. In a world where there is always war, Jenoff seems to be saying that sometimes we must make our own happiness.

Bryana Fern is from Tampa, Florida, where she received her undergraduate degree from the University of South Florida. She is a doctoral student at the Center for Writers at the University of Southern Mississippi, where she also received her Master’s degree and teaches first-year composition. Her work can be found in Sou'wester, USM Product, and Converge Magazine. One of her greatest ambitions in life is to return to London and see a Shakespeare tragedy at the Globe Theatre.

The Wind Is Not a River: A Novel

During WWII, a husband and wife struggle to find each other amid the violence of the Japanese invasion of the Aleutian Chain.

By Per Petterson; translated by Ingvild Burkey