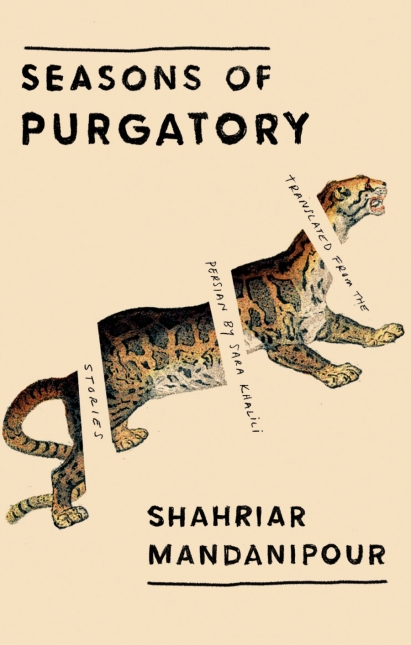 The stories in Seasons of Purgatory, the first collection in English from the distinguished Iranian writer Shahriar Mandanipour, are intricately layered intersections of characters, speakers, and listeners.

In the title story, a company of Iranian soldiers at the front during the Iran-Iraq war narrates, in a single voice, an account of how a particular corpse came to lie unburied between the battlelines for an entire year, until “weeds crept up between his ribs.” They give this account directly to the reader. At the same time, they describe telling it to the greenhorn lieutenant who comes to lead them after their previous commanding officer suffered a breakdown and was sent away.

It turns out that the corpse was a deserter from the Iraqi army — the soldiers have nicknamed him Nasser. He was killed by his own side while trying to reach the Iranians to surrender. The narration circles around and around the traumatic and terrifying events of his death as the soldiers listening to it try to come to terms with what has happened, searching for some action or response in the present that will allow them to put the past to rest.

It is, in other words, the story of a story being told, of the past being recounted and interpreted even as it’s brought to light. Many of the other offerings in the collection contain similar structures and concerns. In “Shatter the Stone Tooth,” a woman reads excerpts from — and reflects upon — disturbing letters she has received from her fiancé, an agronomist posted to a remote and backward region of the country. She’s seeking advice from an unknown interlocutor about whether to continue to wait for him to return.

In “The Color of Midday Fire,” a man explains to his unnamed companion how a friend tried to hunt down the leopard that attacked and killed his child. And in “Seven Captains,” an aging man returns to the village he fled years before after an illicit affair with another man’s wife and finally learns the truth of what happened from the boy who used to carry messages between him and his lover.

In all these stories, memory comes to light piecemeal, changing readers’ and characters’ understanding of both the past and present as it does. The intersecting perspectives are at once bewitching and disorienting. Often, the reader is told very little about whoever is actually telling the story. The result is a tremendously uncanny experience in which the motives of the teller become part and parcel of the story’s mystery.

Mandanipour has been compared to Milan Kundera and to the artist M.C. Escher for the way his fictions require the reader to put them together like a puzzle. When the truth does finally emerge, it is almost invariably haunting and disturbing, not only for what happened but for the ways that characters continue to deny or deflect the full weight of understanding.

I had to read these stories slowly. The dread they impart is not something the reader can lightly absorb. In the lives depicted, there is little if any respite from suffering and horror, and none of the sources of solace that another writer might offer are available here: not love, not family, not even the natural world.

Nature, in fact, is as often as not shown to be inimical to human life and wellbeing. In the opening story, “Shadows of the Cave,” the objectionable smell issuing from a local zoo presages the increasingly bold and sinister incursions of the animals into human spaces. In “Mummy and Honey,” a viper appears to seek deliberate, carefully planned revenge against the family that tried to kill it.

The political history of Iran — the CIA-backed coup of 1953, the revolution that led to the Islamic Republic and its aftermath, the Iran-Iraq war — lingers in the background of even those stories that don’t mention it explicitly. The reader is thus prompted to see the characters’ individual fates as conditioned by these larger social circumstances.

In “King of the Graveyard,” for instance, an old couple whose son was branded a communist and executed for a crime he may not have committed search illegally for his unmarked grave. The wretchedness of their intimate quest is intensified by their fearfulness of being reported by their neighbors, in this case for no more than wanting desperately to mourn their dead.

The stories in Seasons of Purgatory are stunning. They ask the reader to go somewhere that is neither easy nor consoling. “Don’t be impatient…once I explain the entire incident you will get to know one of the world’s great darknesses,” one narrator informs us. This might serve as an epigraph for the full collection; it’s worth heeding by readers with the nerve to look.