Set in a remote fishing village, this whodunit has a surprising amount of heart. 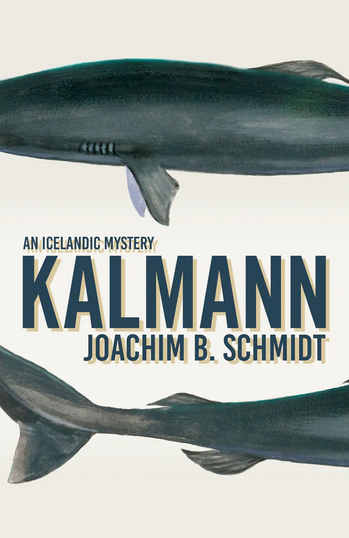 In the isolated town of Raufarhöfn, Kalmann Odinsson — a neurodivergent man who wears a cowboy hat, gun, and badge given to him by his long-gone American father — is the self-appointed “sheriff.” He relishes his role and the comfort of carrying the objects, though he does not in any sense function as a law-enforcement officer. Instead, he makes a living as a shark hunter, carrying on the profession taught to him by his beloved grandfather, who made Iceland’s best hákarl, a delicacy featuring fermented shark meat.

Narrated from Kalmann’s perspective, the story begins with the problem of a “pool of blood” on the snow-covered tundra. Paired with the fact that the most important man in town is missing, it is a dilemma that will upend Kalmann’s carefully proscribed world and plague the once-thriving village decimated by overfishing and climate change.

His world is so ordered and stable, in fact, that a tourist sitting at Kalmann’s customary table in a local restaurant upends his equilibrium. Naturally, the arrival of a policeman from Reykjavik to investigate the blood and missing person catapults Kalmann far outside his comfort zone, sweeping him up in a possible homicide investigation.

Kalmann: An Icelandic Mystery, then, is a whodunit, but it’s far more than that. On one level, author Joachim B. Schmidt has set up the dying town as a critical character, playing on the remote, unusual setting and its inhabitants. These are people whose existence is challenged daily by the elements. They rely on the sea but also each other. Truly, their survival depends on their interconnectedness both with one another and the water.

Yet despite this need, their stewardship of Raufarhöfn has fallen victim to lack of oversight and greed. The village’s collapse is a metaphor for man’s abuse of the environment and signals the looming changes and disruptions of livelihoods and lives that are and will be brought about by global warming.

We might label the villagers “evil,” but they’re simply doing what their ancestors have done for generations: surviving off the land. But somehow, on their watch, what has always worked no longer does. The sea, forever a source of abundance, can no longer support them. The people are surprised and mournful over the death of their way of life. Those left in Raufarhöfn have nowhere to go and don’t know how to be anything other than what they’ve always been. Nevertheless, they must change or face extinction.

It is against this backdrop that the story of Kalmann himself unfolds, his inner and external world rendered effectively through the lens of his neurodiversity, a feat the author carries off well and one of the novel’s great strengths. Though child-like in many ways, Kalmann is in reality a middle-aged man who lives on his own and tries hard to be the person his grandfather showed him how to be.

Like all of us, he finds comfort in the familiar but longs to have what he does not (in his case, a wife). We are never told his diagnosis, and the townspeople mostly accept him and his quirky behaviors. He is just Kalmann, and through his unique eyes — and those of others in the dying village — author Schmidt illuminates the complexities of humans’ relationships to one another and to the planet. Along the way, he gifts readers with insights into the culture of rural Iceland and the struggling fishing industry — all in the guise of a twisty murder mystery full of unexpected charm.

T.K. Thorne wanted to make first contact with aliens. When that didn’t work out, she became a police officer. Although most people she met were human, some were quite strange…Retiring as a precinct captain, she now writes full time. Her books include two award-winning historical novels about women mentioned only briefly in the bible (Noah’s Wife and Angels at the Gate); two nonfiction civil-rights-era works (Last Chance for Justice and Behind the Magic Curtain: Secrets, Spies, and Unsung White Allies of Birmingham’s Civil Rights Days); a dally with murder and magic in the Magic City Stories trilogy (House of Rose, House of Stone, and House of Iron); and a work of YA science fiction, Snowdancers, where she finally got to meet real aliens. When not writing, her hobbies include painting, martial arts, her horses, and traveling.

A story of two fathers who bond over their desperate attempts to save their daughters.

Can a bullied, reclusive girl find love in the arms of a ghost?