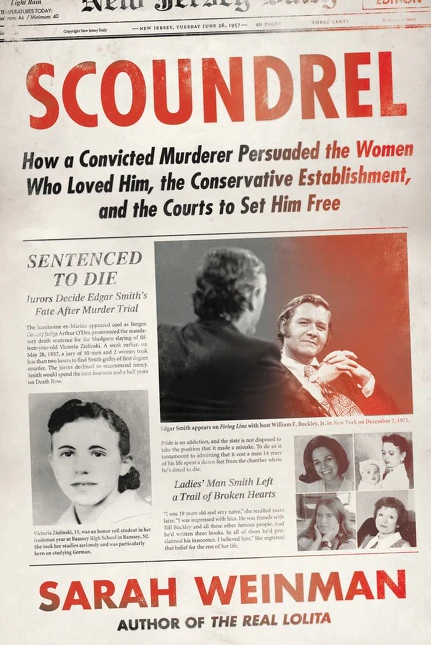 There were 2,436 inmates on death row in January 2022. Four percent of those awaiting execution have been wrongfully convicted says the National Academy of Sciences. These travesties of justice are routinely written about. But Sarah Weinman’s Scoundrel isn’t about a wrongful conviction. Instead, it’s a near-flawless account of a wrongful exoneration and the havoc it wreaked on the lives of those who made it happen and those victimized by the killer they helped unleash.

Edgar Smith was a good-looking, 23-year-old married man with a child when he was convicted in March 1957 of the murder of 15-year-old Victoria Zielinski in the quiet town of Mahwah, New Jersey. He literally bashed her brains out with a baseball bat in a fit of rage.

Smith was arrested quickly; cops found Zielinski’s blood splatter on his clothing and in a car he’d borrowed from a friend the day of the crime. He admitted to police (before the Miranda decision required that suspects in custody be told of their right to remain silent) that he gave the teenager a ride the night she died but claimed she was alive when he dropped her off. He tried to pin the crime on a buddy. After a two-week trial and less than two hours’ deliberation, the jury found Smith guilty. He was sentenced to die in the electric chair on July 15, 1957.

Appeals followed. Smith managed to stay alive on death row at Trenton State Prison longer than he or anyone else expected. Meanwhile, he used his gift of time to remake himself from an unemployed, blue-collar loser into a pseudo-intellectual. He took college classes and kept abreast of current events. In 1962, a newspaper article revealed Smith’s favorite magazine was William F. Buckley Jr.’s National Review. Strangely impressed by that, Buckley, the conservative icon, offered Smith a free lifetime subscription (so to speak).

Thus began a decade-long, letter-writing friendship through which the con managed to con Buckley and others among the literary and legal elite into believing he’d been wrongly convicted, even though there was no evidence to support it. On October 19, 1965, Buckley wrote an influential article for Esquire, “The Approaching End of Edgar H. Smith.” In it, he asserted prosecutors had the wrong man, solicited donations for Smith’s appeal fund, and told readers his writer’s fee would go into the kitty. Buckley even convinced one of the nation’s premier criminal law firms, Williams and Connolly, to take on Smith’s case.

“How does one measure a prick? Along the top, side or bottom?...The best way is to slip in it you just as deeply as it will go, to the root, then you will know exactly how it fits.”

And so on. But his most successful con was in 1971, when he got a federal appellate court to overturn his conviction and grant him a new trial on the grounds his confession had been coerced. Not caring to roll the dice on another trial, Smith pled guilty the second time around and was sentenced to time served.

Then it was out of jail and into the television studio to film Buckley’s talk show, “Firing Line,” followed by TV interviews with David Frost, Mike Douglas, Merv Griffin, and Barbara Walters. On camera, Smith backpedaled about his guilty plea, insisting it was necessary to outsmart the corrupt criminal justice system. His 15 minutes of fame continued with $1,000 appearances on college campuses and at prison-reform conferences where he talked about life on death row.

But life on the outside was no picnic for Smith, who suffered from anger-management issues, or for the true believers who had championed his cause. Although he and Wilkins drifted apart (had he duped her into championing his book, or had she used him to rescue her sagging publishing career?), another former prison pen pal entered into a relationship with him and was frightened out of her wits when, within a year, Smith drove her to a secluded, heavily wooded area after an argument; she feared he would kill her. After he calmed down and they returned home, she refused to have anything more to do with him. In 1974, Smith married a 19-year-old girl he’d met in a bowling alley whom he’d sexually and physically abused.

Smith’s literary career quickly fizzled — it seems he had only one story to tell — leaving him with slim career pickings: security guard, parking lot attendant, dishwasher, and ad salesman for a newspaper in the San Diego area, where he and his second wife settled. He owed back rent to his landlord and back taxes to the IRS. He also defaulted on a bank loan of several thousand dollars that had been underwritten by Buckley, who was left holding the bag.

Finally, on October 1, 1976, Smith abducted a woman at knifepoint outside a factory with the intent to rob her. As he drove her onto the freeway, she fought back, and he plunged the knife into her chest, missing her heart by half an inch. She continued to resist, their car veered off the road, she escaped, and he drove away, but not before a bystander took down his license plate. Miraculously, the woman survived.

Smith fled, crisscrossing the country one step ahead of law enforcement. After two weeks on the run, he called his benefactor, Buckley, from a Las Vegas hotel room. Buckley then called the FBI and turned him in. In the November 20, 1976, edition of his column “On the Right,” Buckley wrote, “I believe now that he was guilty of the first crime.” In March 1977, Smith was convicted of attempted murder and kidnapping and sentenced to life in prison without parole. He died at the California Medical Facility in the prison at Vacaville on March 20, 2017. He was 83.

It seems we’ve heard this song before. Norman Mailer famously promoted the writing talents of incarcerated killer Jack Abbott. Mailer helped Abbott get published, vouched for him with the parole board, and helped secure his early release from prison in June 1981. After a month on the outside, Abbott stabbed a man to death outside a Greenwich Village restaurant. When Buckley heard, he wrote to Sophie Wilkins, “At least ours had the decency to wait a few years, and to botch the job.”

The question Weinman’s book fails to answer, perhaps because there is no answer, is why a criminal’s talent for turning a phrase confers on him an air of innocence — at least to the more naïve among the literati? Are these writers’ egos so large they cannot imagine that a fellow man (or woman) of letters would be anything other than morally upstanding? It is particularly incongruous that a law-and-order guy like Buckley took up Smith’s mantle.

(In contrast, Truman Capote, who had his own experience with killers from Kansas when he wrote In Cold Blood, thought Edgar Smith did it. When Buckley pressed him as to why he thought Smith guilty, Capote replied, “I never met one yet who wasn’t.”)

Buckley’s article in Esquire was influential. Perhaps his reputation as a conservative who supported capital punishment convinced opinion makers that if he thought Smith was wrongfully convicted, it must have been so. But other factors may have been at work, too. During the years Smith awaited execution, America’s ardor for capital punishment had begun to cool. Even before the Supreme Court, in 1972, held in Furman v. Georgia that the death penalty as imposed was unconstitutional, executions were on the wane. There had not been one in America since 1967.

Weinman’s prose is spare and direct throughout. Her fast-paced story reads like the true-crime thriller it is, but she is not content to simply “rip from the headlines.” She dug deep, combing through primary source materials. She was lucky enough to receive the blessings of the children of the three central characters — Buckley, Wilkins, and Smith — who granted her access to their correspondence. What she did with that material demonstrates her fine skills.

What made Edgar Smith tick defies explanation even more than why he attracted his cult following. But after his March 1977 conviction in California, at least, editors at the Bergen (NJ) Record got it right. The paper’s headline about the conclusion of the Smith story? “The Saga of a Bad Man.”