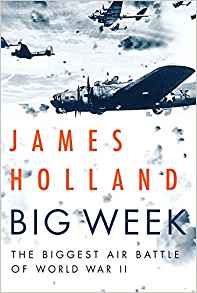 At this moment — 75 years after the fact — one wonders how many more major works on the Second World War are still to appear. The shelves are already groaning with definitive works on that conflict by some of the best writers past and present from both sides of the Atlantic.

Now, British novelist and military historian James Holland (The Allies Strike Back, Fortress Malta, and The Battle of Britain, to name a few) has written a new book which is a major work on an often overlooked event key to ending the war in Europe.

For starters, Big Week is an eye-opening narrative detailing the buildup to the crucial period in February 1944 when American and British forces conducted a series of air raids staged to smash the main factories and production centers of the Luftwaffe, the Nazi air force, while drawing German fighter planes into the air and into battle. The official name for this offensive was Operation ARGUMENT, but it was quickly known as the Big Week because of its importance.

Getting to that triumphant week was not easy. Late in 1943, the American and British high commands operated under the flawed notion that the war could be won by steady, around-the-clock bombing of Germany.

But a shortage of long-range fighters to escort the bombers meant those bombers were exposed for the most dangerous part of their missions, and the resulting loss of men and machines was unsustainable. Given this situation, it became quickly apparent that unless the Luftwaffe could be crippled, a successful Allied invasion of Europe was out of the question.

Salvation arrived in the form of a new weapon, the P-51 Mustang, a long-range fighter designed and built in 127 days by the fledgling North American Aviation Co., and then transformed by an extremely powerful Rolls-Royce Merlin engine and external fuel tanks. Suddenly, the Mustang had the power and range to accompany bombers from their bases in England all the way to targets deep in Germany and back. And these fighters were more than mere escorts: They were set free to confront their Luftwaffe counterparts in direct combat.

All this came together in the Big Week.

The larger point made by Holland is that what transpired during the Big Week not only established air superiority for the Allies, but also saved the plans for D-Day and the invasion of Normandy. In April 1944, the skies of Western Europe were now largely clear of Nazi fighters and bombers and, on the eve of the D-Day invasion in June, Gen. Dwight Eisenhower could assure his forces: “If you see fighting aircraft over you, they will be ours.”

This, Holland insists, deserves to be more widely known and to be woven into the D-Day narrative, rather than consigned to the general history of the war in the air, which “in turn is so often viewed in isolation rather than in its more important wider context.”

Finally, Holland is a master of narrative. His combat scenes are crisp and evocative, and he does a masterful job of putting the reader in the cockpit with the men on all sides fighting this war.

Anyone with more than a passing interest in WWII will find this book invaluable in understanding how the war was won and how many airmen sacrificed their lives to win the battle that led to victory. Men from both sides who lived (and often died) come alive through stories Holland skillfully coaxes from interviews, oral histories, diaries, and official records. Among those Holland follows are famed actor and bomber captain Jimmy Stewart, German ace Heinz Knoke, and a lot of scared, brave American airmen.

Finishing Holland’s book the same week that former president and naval aviator George H.W. Bush died added extra poignancy to the experience of reading it. Bush, who flew 58 combat missions as a torpedo bomber and who was shot down in the South Pacific, would have easily fit in with the courageous young men portrayed in Big Week.

Paul Dickson, the author of more than 60 books of nonfiction, lives in Garrett Park, MD, with his wife, Nancy.