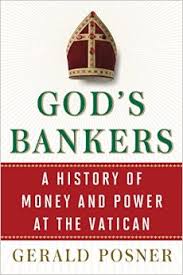 During the 20th century, the Vatican changed from resisting to embracing capitalism and modern finance. In tracing this transition, Gerald Posner tells a tale of intrigue, money, and power that spans centuries.

It is not, as he explains in the preface, a story “about faith, belief in God, or questions about the existence of a higher power.” But as God’s Bankers follows the role of money “and accumulating and fighting over it” through the history of the Roman Catholic Church, it cannot help but touch on ethical and moral concerns and contradictions.

God’s Bankers opens with a glimpse of developments to come, with a young London postal clerk, in 1982, discovering a dead body on his way to work. But to provide the context to understand why this Italian banker was likely murdered, the book turns the page back to the late 18th century.

The church in this era remained tied to its medieval view that interest-bearing loans were evil and sinful — a perspective that presents obvious problems for the management of institutional funds at the dawn of the modern financial age. As the 20th century opened, the Vatican did not even have an internal budget for its operating costs. Unfortunately, the introduction of modern fiscal-management policies created an institution, popularly known as the Vatican Bank, with the sole directive of earning money — treacherous moral ground as fascism began to loom over Europe.

The heart of the book — and its most gripping reading — covers World War II, during which Vatican officials repeatedly failed even to speak out against the genocide unfolding in Europe. The situation and motivations were complex, but Posner draws a persuasive picture of an institution driven, at least in part, by its own financial interests at the expense of fundamental human decency: “Vatican investments in Italian insurance companies … developed into stakes that profited from the ongoing murder of Europe’s Jews.”

Church leaders’ priorities were often questionable. Reluctant to publicly address the Holocaust, they did not hesitate to protest reports of nudism being practiced by the Germans. Prostitution worried them more than did death camps.

Posner follows the role the Vatican and its bank played in the postwar “rat line” that helped Nazi war criminals escape justice. He concludes that the ringleaders of this effort were “in fact aided by some of the church’s top prelates.” Here, as with the cover-up of the pedophile-priest scandal later in the century, Vatican leaders’ actions were driven by power and money (and an ingrained institutional history of anti-Semitism).

As the 20th century progressed, entrenched interests developed, seeking to keep the Vatican bank in its role as an offshore financial haven in the heart of Italy. International pressure to combat money-laundering has made little headway until recently. The new pope, Francis, has taken steps to clean things up, but whether he can ultimately reform this secretive financial institution remains an unresolved question.

While this is a story of much wrongdoing featuring many unsavory characters, it is no black-and-white morality tale. Human motivations are honestly explored. Players who push for reform and transparency may do so out of personal motivations and not because they seek to promote the public interest. Even those responsible for significant misconduct are portrayed with nuance, as people whose choices were constrained by both their character and contemporary circumstances.

God’s Bankers is meticulously researched. Almost 200 pages of end notes indicate the care Posner took in nine years spent researching his subject. As stated in the preface, it is a particular challenge to report on an institution that “keeps massive documentation in self-described Secret Archives.”

The book tells a compelling story, but never at the expense of journalistic principles. Posner might speculate, but he is always careful to mark it as such, and to point out the facts and primary sources that support or undermine the speculation.

God’s Bankers is often fascinating reading, full of international intrigue — not least the scandal that led to the London death (that opens the book) of an Italian banker, one who had claimed all the crimes he was charged with had been carried out at the direction of the Vatican Bank. At times, however, one story of money-laundering after another can become difficult to track. The reader must grapple with scores of different names over several centuries, and potential confusion is only amplified by the fact that some key figures become pope and change their name midway through their appearance in the story.

A lesser author might have given us an easier read, but Posner did not set out to provide sensationalism. His work pulls together existing scholarship and massive amounts of original research to present the closest thing to a definitive account of the workings of money and finance within the Vatican that could be produced without cooperation from the Vatican itself.