Schadenfreude, a Love Story: Me, the Germans, and 20 Years of Attempted Transformations, Unfortunate Miscommunications, and Humiliating Situations That Only They Have Words For 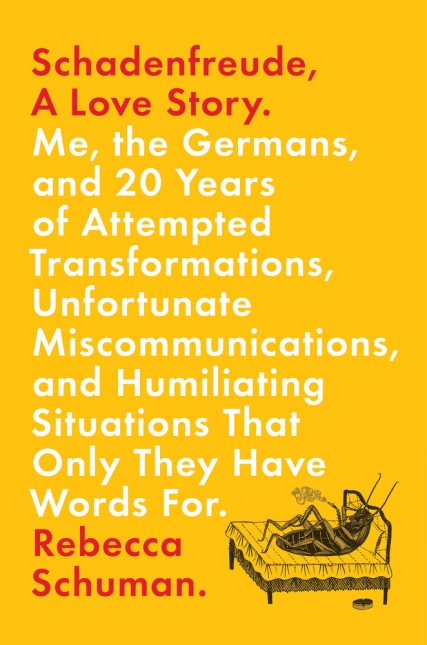 I agreed to review this book because of its title: Schadenfreude, a Love Story: Me, the Germans, and 20 Years of Attempted Transformations, Unfortunate Miscommunications, and Humiliating Situations That Only They Have Words For.

I thought it would provide new insights into the German psyche based on the author’s two decades of experience with the German people. I’d like to understand German culture better. It’s so sturdy and admirable and awful all at the same time. I also thought the book would be funny, since the title is.

But the title doesn’t describe the book.

The focus is not on Germany or its people. As near as I can tell, author Rebecca Schuman has lived in that country for maybe a year in total, not 20. For part of that year, her conversational German was poor, so she didn’t really get to know the locals, which is just as well since she’s not very interested in Germans. She’s interested in herself.

Schadenfreude turns out to be one of those memoirs that the publishing industry churns out by people who have neither lived very long nor done very much.

To deploy a marvelous, only-in-German term, the author delivers a bildungsroman in memoir format. (I looked it up so you don’t have to: A bildungsroman is “a novel dealing with one person’s formative years or spiritual education.”)

Thus, the book serves up a heavy dose of teenage angst in Oregon, including a riff about SAT scores, a subject with no evident connection to matters Teutonic. We are supposed to sympathize with the author’s supposedly disappointing academic performance — after all, she only got into Vassar.

Then we progress to madcap escapades based on bad decisions she made as a young wannabe creative person in Germany and New York. We close with a sendup of academia and an extended cri de cœur about the frustrations of spending years becoming a humanities scholar and teacher only to find that the 21st-century economy doesn’t always value such achievements.

Along the way, Schuman offers a few rhapsodies about Kafka’s writings. (You don’t have to be in Germany to write about Kafka.) Although, as she repeatedly acknowledges, most Germans dismiss Kafka as a Czech who happened to write in German.

There are some funny passages. The author deftly dissects her failure, during an early effort to speak with Germans, to find the words that would explain that her “fold-up bunk bed was stuck in its ‘up’ position, and thus locked to the wall.” Through small but crucial linguistic blunders, she ends up announcing that “the bed I owned back home was shut like a door.”

And she describes the bafflement experienced by Germans when she loses housekey on one occasion and her purse on another. “Germans simply do not misplace their stuff…Sure, we won the war, and the war before that, and the Cold War, too, but at least they never lose their goddamned car keys.”

But mostly we read about the author. If you’re interested in Germany, read something else.

David O. Stewart writes fiction and nonfiction. His most recent books are The Babe Ruth Deception, an historical mystery, and Madison’s Gift: Five Partnerships That Built America. He is president of the Independent.