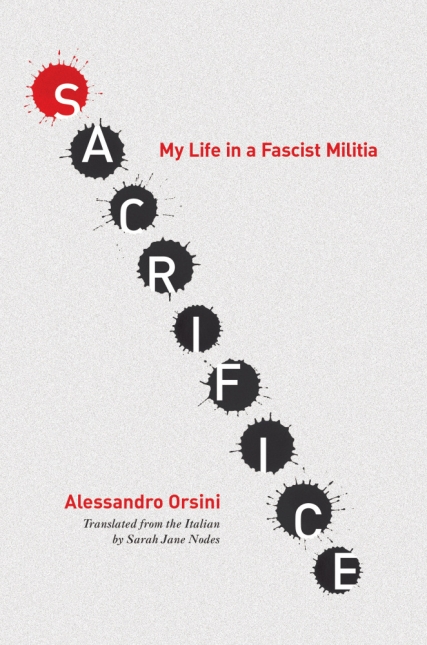 One of the common complaints from the young fascists that Alessandro Orsini hangs out with in Sacrifice is that “girls only look at guys who have money.” Women regard guys like them as “penniless scum.” Fascists don’t get respect, they act out.

Orsini, a sociologist and researcher affiliated with MIT’s Center for International Studies, spent five years undercover with fascist cells in two Italian cities to get a range of views in the movement. One city (called Lenintown in the book) is left-leaning, while the other (dubbed Mussolinia) is more conservative.

The views and motivations that Orsini finds in the group he calls Sacrifice aren’t shared by most of Italian society. As he notes, Italy is among the most peaceful European countries and was slow to erupt with the anti-immigrant fervor seen elsewhere on the Continent.

But that may be changing, with recent news from Italy about a fascist candidate for city council winning a seat in Ostia, a suburb of Rome, in a November election. The group called CasaPound (named for poet Ezra Pound, a Mussolini supporter) won 9 percent of the vote, enough for a seat. The candidate, Luca Marsella, told a New York Times reporter, “If this happens in other cities, we’ll have a chance to go into Parliament to defend our nation.”

That is still far from the current picture, but Orsini’s portrait of Fascism (the Italian party and its progeny, distinct from broader, lowercase “fascism”) isn’t that of a distant past. “This is living ethnography,” he writes.

And it can be brutal, judging from the opening scene’s eye-gouging brawl. Orsini argues that the group members he studied don’t embrace violence out of ignorance. Rather, they come to it from readings they’ve sought out and absorbed.

“They study, they read, they reflect,” he writes.

Still, some of their words express simple groupthink. “What counts is we all have the same way of thinking,” one member tells him; “We’re all Fascists and we all do the same things. Our motto is: We are what we do!” The group has no written rules. Yet at least one branch leader insists that his members read from a core list and join weekly study sessions.

Orsini interviews members in small groups and individually. He questions protesters against the group and tests them with provocative statements. In the course of his undercover research, the author starts to feel the alienation of his subjects. Friends are incredulous about his choice to immerse himself with the Fascists. His parents are deeply ashamed of his work.

I’m no ethnographer, so I can’t assess the quality of Orsini’s observations. At points, he seems a less-than-reliable narrator. Characters seemingly change behavior without warning or explanation. A “friendly” chief of police suddenly warns Orsini ominously that authorities may not be able to protect him if something goes wrong.

Since Italy’s constitution forbids any reconstituted Fascist party, Orsini writes, “Militants are planning to combat bourgeois democracy from the inside, as Hitler and Mussolini did.”

Some conversations go in circles when members avoid being pinned down on their beliefs. The author describes a visit to a bookseller he calls Romulus, who runs a secret shop in the heart of Rome, selling outlawed Fascist tracts. The documents celebrate the values of loyalty and friendship, and the idea of dying for a higher cause — the fatherland.

One member complains, “Europe is being invaded by blacks from Africa. Very soon Italy won’t exist anymore. There’ll be a huge mosque in place of the Vatican. Italians have become spineless. Know what I’m saying?” To defend his country, he envisions a “glorious death.”

That mindset became vivid in 2013 with the public suicide of Dominique Venner, a French far-right historian and veteran. Surrounded by more than a thousand tourists and worshippers at Notre Dame in Paris, Venner approached the altar and shot himself in the mouth with a handgun.

His suicide was in part a gesture of protest against France’s law legalizing gay marriage, but members of Sacrifice interpreted it as a “noble and most heroic gesture,” the kind that could mobilize change and stop immigration. Venner left behind a letter encouraging far-right groups and explaining his act; it was read aloud at many branch meetings of Sacrifice.

Orsini follows along to a mixed-martial-arts cage match and to political protests. He learns the Fascists’ secret handshake. He gets spat upon by anti-fascists who assume he’s associated with Sacrifice and finds himself seething with rage. “Hatred is a hot fluid that invades your heart, lungs, blood, and arrives at your brain. It’s a stream that comes from the outside, like a dose of poison injected into your vein.”

There are digressions and spy-like episodes of scribbling notes in a car after an altercation. These give the book moments of thriller-like suspense. Orsini goes to lengths to give coherence to the group’s violence. To create their own social reality apart from bourgeois society, he says they construct a “parallel world” using violence in three ways: via sport, constant tension with the far left, and brawling.

“Although many people believe that barroom brawls are caused by irrational behavior,” he writes, “it’s precisely the brawls that reveal a more complicated interaction…They are steeped in symbolism.”

Besides the nativist slogans, the militants use targeted actions to gain support. Orsini describes their programs for food distributions to needy families: They prepare packages at night and deliver them in the morning — but only to poor white Italians, of course.

It gets them votes. One 34-year-old house cleaner in the Ostia election voted for CasaPound, the rightist group, because, she said, they were “the only ones who are here helping — helping the Italians.”

In the end, the militias expel Orsini and threaten to punish him if he tries to contact any of their members. It’s an inverted expression of their belief in loyalty.

Orsini mentions fascists in other countries, including Timothy McVeigh, the 1995 Oklahoma City bomber. It’s tempting to draw parallels between the groups described in Sacrifice and the escalating situation here, but that would gloss over big differences in historical context. What Sacrifice can show is one piece of the dynamic in today’s Europe, and offer a glimpse into actions and motives that can seem incomprehensible.

At the end, Orsini writes that part of his motivation for the book came from when he was young and witnessed a childhood friend grow disaffected. After failing exams and feeling adrift, the friend went from an easygoing joker to a Fascist group member. Orsini concludes that, for himself, “The most effective way to fight violence is to get to know it.”

David A. Taylor’s fiction collection Success: Stories received the Washington Writers’ Publishing House fiction prize and was a People’s Choice finalist in the Library of Virginia Literary Awards. His nonfiction book Soul of a People, about the WPA writers of the 1930s, was ranked among the year’s best books by the Pittsburgh Post-Gazette. His nonfiction also includes Ginseng, the Divine Root; The War of 1812 and the Rise of the U.S. Navy, co-authored with Mark Collins Jenkins for National Geographic Books; and Cork Wars, a social history of three families during World War II, forthcoming from Johns Hopkins University Press. He teaches at the Writer’s Center in Bethesda, MD, and in the Johns Hopkins Science Writing Program.