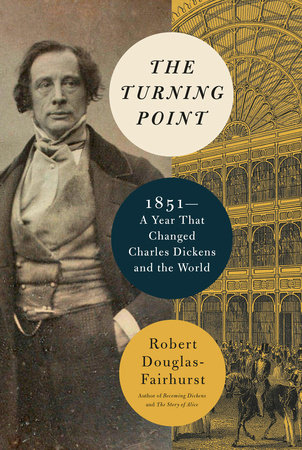 The phrase “turning point” is now used, perhaps overused, in sports, politics, and plot descriptions. But in 1851 in England — the time and place of this particular turning point — the term had recently entered the popular lexicon, author Robert Douglas-Fairhurst explains, as a “phrase that could be used to investigate the relationship between changes of global importance and the smaller kinks and swerves of individual lives.”

And so, Douglas-Fairhurst uses it as a lens through which to view one of England’s most famous authors, Charles Dickens, and the place he called home.

In 1851, Dickens was 39 years old, widely published, and pulled in a hundred different directions, mostly by his own design. He was, says Douglas-Fairhurst, “a bundle of different people who happened to share one skin.” He edited a weekly magazine called Household Words, served as an actively involved patron for a home for so-called fallen women, and micromanaged the staging of elaborate, ostensibly amateur theatrical productions.

When he decided to move his large family into a fixer-upper in London, he was the one choosing the wall finishes and fretting that the workmen hadn’t shown up. Meanwhile, this was the year he began what many consider his greatest work, Bleak House. Yet with the death of his father and an infant daughter within two weeks of each other in April of that year, along with the 19th-century version of a mid-life crisis, Dickens felt the stirrings of change.

In 1851, too, England stood at a turning point. Steam-powered-train lines linked the country, altered the landscape, and standardized time across the nation in order to maintain schedules. In London, old sewer lines, shops, and neighborhoods were replaced with new. And, after much anticipation, on May 1st, Queen Victoria officially opened the Great Exhibition, with its hallmark Crystal Place, in Hyde Park.

“The Crystal Palace was more than just a piece of striking architecture,” writes Douglas-Fairhurst. “It was a prism that refracted the hopes and fears of an entire nation.” It positioned England as the center of the world, a place to showcase technological, cultural, environmental, and all sorts of other wonders. Designed to celebrate “the Works of Industry of All Nations,” it also required the forcible removal of poor people who lived in the park.

Douglas-Fairhurst sensibly structures his book by season — winter of 1850-1851, followed by the four seasons of 1851. Despite his aim to focus on a single year, references to happenings before and after inevitably seep in to offer context or suggest how the year’s events affected the future.

As a frame, it would have been convenient for Douglas-Fairhurst had Dickens been involved with the Great Exhibition, but such was not the case. Although intrigued by its construction, Dickens hated it once he visited. He even moved his family to the seaside town of Broadstairs to avoid the crowds and refused to print an after-the-fact appreciation of it in Household Words. Thus, the two phenomena in The Turning Point rarely intersect.

Reading this book as a biography in the traditional sense would leave a lot of questions for anyone not already familiar with the outlines of Dickens’ life, including the impact of his father’s debts on his own childhood and, later in the 1850s, his public repudiation of wife Catherine. I’d read several Dickens biographies in the past but still checked in with Claire Tomalin’s Charles Dickens: A Life and The Invisible Woman: The Story of Charles Dickens and Nelly Ternan several times.

Douglas-Fairhurst is particularly skillful at describing the scenes of Dickens’ multitasking. An inventory of known letters he wrote on a single day in April 1851 pained my penmanship hand as I read it. A description of the goings-on around Wellington Street is similarly immersive, where, in addition to the Household Words editorial office, “between 1843 and 1853, more than twenty newspapers or periodicals and thirteen booksellers or publishers scratched out a precarious living.”

What about the larger world beyond Dickens’ circle — did it undergo a turning point in 1851? Yes and no. Douglas-Fairhurst asserts, “What had made the year of the Great Exhibition different was that it involved an entire nation looking at itself and — at first tentatively and then more confidently — celebrating the arrival of a new, self-consciously modern age.” As for Prince Albert’s claim that the exhibition would usher in a new era of peace and harmony? Alas, that’s the topic of scores of other books.

A professor at Oxford, Douglas-Fairhurst has written several books that home in on a small piece of a larger life of a subject, including the period in the 1830s when Dickens established his literary career (Becoming Dickens). In an author’s note, he shares that he wrote most of The Turning Point while recovering from a stem cell transplant. Perhaps this turning point in his own life heightened his sensibilities about how events can shape an author’s personal and creative worlds.

Paula Tarnapol Whitacre is a writer and public historian with a particular interest in 19th-century social history.