Estranged relatives come together — but keep themselves apart — in this page-turner of a ghost story. 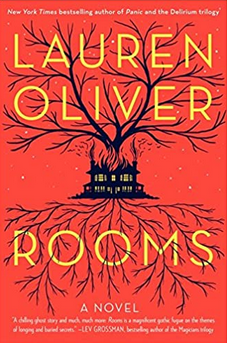 We don’t seem to tire of ghost stories. Or, for that matter, haunted houses. Perhaps that endless fascination arises from the place where so many of these ghost stories begin: our homes, where we live out our ordinary lives in the domestic realm, where the messiness of living and dying takes center stage.

The rooms in our houses say something about our outer, physical lives, but often they hint at our inner lives, or what we might call souls. Lauren Oliver, bestselling author of young-adult novels including Before I Fall and the Delirium trilogy, makes her adult-fiction debut with Rooms, and taps into readers’ voracious appetite for tales of the supernatural that imagine where we go from here — and what that means in this life.

We have been here before: Someone dies and leaves behind unfinished business, unanswered questions, unfulfilled relationships, and undiscovered secrets. In this case, Richard Walker passes away, leaving his disgruntled, estranged family to deal with his funeral and will, part of which includes his country house in New York, where they all once lived as a family.

Richard’s ex-wife, daughter, granddaughter, and son take up temporary residency in the rooms of the old house as they sort through his belongings and their own memories. And there are two other residents: Sandra and Alice, specters who also once lived in the house and who have their own voices, both in the narrative and in the ears of certain members of the Walker family.

In the days leading up to the reading of the will, and finally the funeral, the crowded rooms of the house fill up with emotion and memories and, in the end, several mysteries are solved that bring closure for the characters in very different ways.

Oliver livens up this time-honored plot by structuring the novel using the rooms of Walker’s house, as well as alternate perspectives and voices. In this page-turner, characters are given relatively short chapters, stories are told, secrets unfold, and readers are kept engaged by this textural movement and curiosity about the interconnectivity of their paths.

Some of what unfolds is rather predictable, but not everything is what we might expect. For the most part, Oliver skillfully weaves her tales together clearly and cleanly, although there are times when the memories, or backstory, of some characters lead us a bit too far from the main narrative threads. And at other times, what happens in the main story feels a bit cliché — not unlike the plotlines of television dramas.

The real strength of this novel is Oliver’s knack for rendering charmingly flawed characters with real-life problems and complicated relationships: There is addiction, abuse, bad behavior, and sadness. The two distinct spirits — Sandra is lively and rough around the edges, while Alice is thoughtful and poetic — are the most fully developed and interesting.

It is not difficult to imagine these characters and feel something for them as the narrative threads unravel, because despite the fact that they are all under one roof, they still cannot seem to understand one another or the man, Richard, whose life and death has brought them together. Often, they are each behind closed doors in separate rooms of the house.

Oliver’s prose is crisp and clean; it gives the book much of its energy. She is especially skilled at matching the prose to the ghosts’ temperaments: Sandra’s edginess fuels much of the book’s overarching tension, and some of the most beautiful writing comes in Alice’s sections, for Alice has written a children’s book that also binds many of the characters together. Here she is describing her own existence after death:

“Day is no longer day to us, and night no longer night. Hours are different shades of hot and warm, damp and dry. We no longer pay attention to the clocks. Why should we? Noon is the taste of sawdust, and the feel of a splinter under a nail. Morning is mud and crumbling caulk. Evening is the smell of cooked tomatoes and mildew. And night is shivering, and the feeling of mice sniffing around our skin.”

What this book seems to be hinting at is our longing to connect with one another and how, ultimately, it is the stories we tell ourselves and each other that have the ability to keep us from true isolation.

But this idea isn’t developed in any deep or nuanced way. We read this book for its engaging plot, and perhaps we do think about what it means to connect, for as the characters wander through Richard’s house, the vistas of the present, the past, and the future reveal that neither the living nor the dead are able to grasp how to understand one another while staying true to themselves.

Holly Sneeringer earned an MFA from Goucher College, and has taught writing at the University of Maryland, Baltimore County (UMBC) and Towson University. Her work has appeared in various places, including the St. Ann’s Review, the Gettysburg Review, and the Los Angeles Review. In 2013, she was the recipient of the A Room of Her Own Foundation’s Orlando Award. She is a fiction editor for the Baltimore Review.

This novel which follows a Polish family in its journey of survival during and after World War II undoubtedly will be compared to William Styron’s Sophie’s Choice.