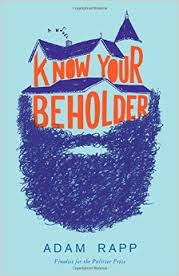 Like any human, I have my preferences. When it comes to literature, I like a character in distress. Give me someone who’s lost everything; someone who’s hanging off the edge of life. Apparently, I’m not alone. There are psychological theories about how dark themes capture (and assuage) our worst fears, conversely providing hope and instruction for what to do when everything falls apart.

Adam Rapp answers this call with his new novel, Know Your Beholder, a nearly gothic tale of a man’s journey through the dark night of the soul.

Thirty-something Francis Falbo is a failed musician, recently (very unhappily) divorced, and grieving the death of his mother. All he has left is a large family home that’s been converted into rental units.

Outside, the worst snowstorm in decades rages as Francis moves between brooding about past mistakes in his stifling attic unit and managing a cast of eccentric tenants.

Suffering from agoraphobia, Francis finds he cannot step off the porch of his house. And who would want to? The blinding blizzard has reduced his northern town to an eerie snow globe where people can only get around by cross-country skiing.

The house itself is shrouded in mystery and heartbreak: The little girl of the family who rents the ground floor has gone missing, leaving Francis wondering whether her parents (former circus performers) are to blame. A trap door is discovered in the basement, and from his window, Francis begins to see a disappearing/reappearing snowman sporting the missing girl’s scarf.

But Know Your Beholder isn’t a thriller or a horror story, at least not in the literal sense. The creepy details frame a more profound tale about how a life is taken apart and rebuilt. Throughout, readers are treated to the beautifully written and emotive backstory of how Francis went from being a happily married small-time rock-star to a suicidal, wildly bearded landlord in a festering bathrobe.

Along the way, we get to know Francis’ tenants. There’s his ex-wife’s brother, an inscrutable young man whose presence gives Francis hope that his marriage might not be over after all; an artist who wants to paint Francis in the nude; a kindly retired janitor; and the parents of the missing girl who don’t seem to like or trust Francis any more than he likes or trusts them.

Francis’ drug dealer appears frequently, a man who lives in a car and might just be the only character in the book who’s well adapted. An unwanted houseguest also arrives (Francis’ former bandmate), pushing Francis to do something morally repugnant and illegal, though I will admit to cheering him on the whole time.

At times, the novel’s tone is as unstable as the narrator, a realist ride pushing toward dark, matter-of-fact humor. The irony isn’t delivered with a wink or a nudge, but straight up, with the author’s full confidence that readers will somehow understand the strange motivations of the main character. At other times, the tone veers toward haunting before swinging back to a deep, psychological study.

The book nearly suffers from too many characters and too many storylines (one of which doesn’t get resolved, and others which are resolved too easily). And, beware, those with weak stomachs! There is gross man content here: bad breath, rotting teeth, epic shit stains, skin/beard/hair infestations, body odor, blood, wayward ejaculation, and foot fungus. I actually threw up because Rapp writes so vividly, though (full disclosure) I am pregnant.

No matter the book’s small imperfections, the entire project comes together beautifully, and I highly recommend it. Rapp’s exploration of exceedingly dark topics pays off as an anthem to sticking it out through hellish times.

After all, exes eventually fade into the past. New opportunities crop up, love happens all over again. What’s lost can sometimes be found. And as for winter (the literal one and the figurative one), no matter how long and how cold, it always comes to an end.

Dorothy Reno is a DC-based writer who’s been published by Red Tuque Books and is working on a collection of stories called The One that Got Away. She comes from a place with long, harsh winters and lived in plenty of depressing attic apartments in her twenties.