The German Heiress: A Novel

This riveting tale gives voice to an often-overlooked population from WWII. 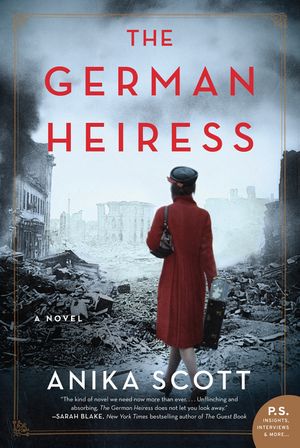 Not since college years ago have I read a book straight through in one sitting. But recently, with The German Heiress by Anika Scott, I found myself one morning in a plush armchair, suggesting excuses for supper leftovers to my husband, or, in a pinch, slow cooking in a crockpot — anything I could think of to allow me to stay put and savor this alluring novel about a woman known as the “Iron Fraulein.”

This page-turner is a singular look at post-WWII Germany through the eyes of the fictional Clara Falkenberg, admired for operating her family’s ironworks empire during the war. By 1946, Clara is a wanted war criminal with a past cloaked in mystery. A British officer hunts her zealously, and he has voluminous files on the iron maiden and her relatives, whose suspicious actions were recorded during the war.

Armed with only a fake passport, Clara seeks to hide with an adult friend from childhood, Elisa, who survived the conflict, but who has gone mysteriously silent since Clara’s last letter two months before. Clara sets out for her homeplace in Essen to find Elisa and Elisa’s teenaged son, Willy.

Her journey takes her across ruined German land strafed by English fighter planes; entire cities have been reduced to rubble. Clara’s countrymen and women are starving and stealing; they have become like rats in hovels, scrounging anything to survive.

The Iron Fraulein, once wealthy and revered, becomes a desperate fugitive among them. Her father, imprisoned by the Allies, is carrying gruesome secrets that she learns while on the run from the relentless British Captain Fenshaw.

Clara locates her mother, embittered and defiant; she encounters a former lover, nefarious and still enraptured with her; and she meets a Russian black marketeer who joins in her search for Elisa.

There is much to praise in this vivid, well-researched novel. The scenes of war-ravaged Germany are graphic and convincing, presenting the local impact of Hitler’s Third Reich and the devastation wrought upon the everyday people of Deutschland.

The story is wrapped around plot twists that intrigue, characters who beguile, and issues that are everlastingly current: right versus wrong; morality and justice; fate versus individual will; and the inevitable suffering of civilians caught in the crosshairs of battle.

Midway through the book, Clara discovers Willy living alone in a hillside cave and believing the war still rages. As he compulsively sorts machine parts, nuts, and bolts to pass the time in his deluded seclusion, the boy asks Clara:

“Have you ever felt like things are planned for you, fräulein?...Like the whole universe or a god or something planned everything before you were born? That is was all decided for you? And that you don’t have a say in any of it?”

This was a delicate moment. What she said might tip him back into silence or allow him to open up to her. She picked up the folded blanket, shook it out gently and began to fold it again. Maybe her movements soothed him as much as they did her.

“It seems like a lot is planned for us, yes.” Thinking of her father, she added, “But not by gods.”

For readers seeking a perspective often overlooked in books about World War II, both fiction and nonfiction, The German Heiress offers a realistic view of deeds and misdeeds provoked by fear, actions motivated by survival, and judgment clouded by secrets. This spellbinding narrative reveals the often-forgotten ordinary Germans caught up in the turmoil of Nazism, whether or not they supported the Reich.