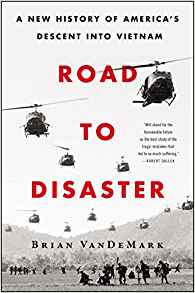 Brian VanDeMark’s Road to Disaster is a landmark in the Vietnam war literature. Running 543 pages of text and more than 40 pages of reference notes, it relates decision-making about the April 1961 Bay of Pigs and the October 1962 Cuban Missile Crisis to judgments made during the years of the Vietnam war.

In the process, it demonstrates how the movers and shakers —Kennedy, Johnson, McNamara, Clark Clifford, and many otherwise brilliant men — failed to understand and act on the data they had before them and took actions detrimental to themselves and to our country.

The author has sterling credentials: He has taught about the Vietnam war at the U.S. Naval Academy in Annapolis for more than 25 years. He was the research assistant to Clark Clifford for his book, Counsel to the President, and coauthor of Robert McNamara’s In Retrospect.

Early in the book, VanDeMark references psychological and sociological studies that highlight the tendency for bright and successful people to be overconfident, misled by their own biases, and distracted by short-time thinking. Optimism and self-reliance can become wishful thinking and then self-delusion. Throughout the text, he examines the decision-making about Vietnam in the light of these studies.

The first 100-plus pages of the text narrate the Kennedy administration’s handling of the Cuban Missile Crisis after the Bay of Pigs disaster. Kennedy persevered in his decision not to launch an attack on Cuba in the face of almost universal disagreement with his advisors and confidants. The recognized success of his resolve caused him to trust his own wisdom about Vietnam. The stage was set for grave error.

Kennedy, like the leaders who followed him, lacked all but the most superficial knowledge about Vietnam, its history, and its culture. Nor did he or his successors consult with the handful of people in the government who had a depth of understanding about the country.

The most culpable of Kennedy’s decisions was his tacit support of the coup d’etat against South Vietnam’s president, Ngo Dinh Diem. Ironically, Diem and his brother, Ngo Dinh Nhu, were murdered on November 2, 1963, only 20 days before Kennedy’s own assassination.

When Lyndon Johnson, Kennedy’s vice president, took office, he repeatedly increased the size of the American force strength in Vietnam. He first committed troops for combat in 1965, then raised the number of soldiers and Marines in-country until, by 1968, they totaled over 536,000.

According to VanDeMark, Johnson knew that consistently boosting the troop level was a mistake, but he couldn’t face the prospect of being the first U.S. president to ever lose a war. His Secretary of Defense was Robert McNamara, a brilliant thinker who used numbers and measures to shape his decisions. He supported, even insisted on, raising the number of U.S. troops committed in Vietnam.

His quantitative logic did not address the imponderables.

He failed to grasp the North Vietnamese’s “intense belief in themselves as the sole legitimate expression of Vietnam patriotism and their fanatical commitment to reunify the country and drive the foreigners out — all of which fed their extraordinary tenaciousness and willingness to absorb extraordinary punishment from an adversary they knew that they could not defeat by force of arms alone.”

As VanDeMark stresses, the Vietnamese communists suffered millions of war-related deaths during the conflict as compared to the U.S.’ 58,000.

The portrait of McNamara in the pages of Road to Disaster is arguably the most moving aspect of the book. McNamara never recovered from the sense of defeat and guilt for his role in the Vietnam war. He never publicly visited the Vietnam Memorial — the Wall — on the National Mall. Instead, in the dead of night, he went multiple times to view it in the dark, alone.

Body counts became the measure of success. Westmoreland never understood that the North Vietnamese doggedly pursued a stratagem of guerrilla warfare summed up in the words of Mao Tse Tung: “The enemy advances, we retreat; the enemy camps, we harass; the enemy tires, we attack; the enemy retreats, we pursue.” It was, as VanDeMark explains, “all in an effort to exhaust the Americans ‘little by little by small victories.’” We never lost a major battle in Vietnam, but we lost the war.

VanDeMark defines the war as lasting from 1965 to 1973. I see it as going from 1959 to 1975 — when Saigon fell, and I escaped under fire. The way he describes the Viet Cong and the National Front for the Liberation of South Vietnam suggests that he’s not aware that both were fictional creations of and completely subordinate to North Vietnam.

Indeed, the declaration of the National Front’s formation was drafted by the Lao Dong (Workers) Party — that is, the Communist Party — in Hanoi in 1960 and then promulgated in South Vietnam to disguise North Vietnam’s control of southern communists.

Quibbles aside, my judgment is that Road to Disaster is a fine and much-needed history. This is the book I’ve been waiting for — a thorough and thoughtful history of what led to the war that shaped my life.

Every year between 1962 and 1975, Tom Glenn, comfortable in seven languages other than English, spent at least four months in Vietnam and escaped under fire during the fall of Saigon after the North Vietnamese were already in the streets of the city. His fourth novel, Last of the Annamese, recounting events surrounding the fall of Saigon, was published last year by the Naval Institute Press.