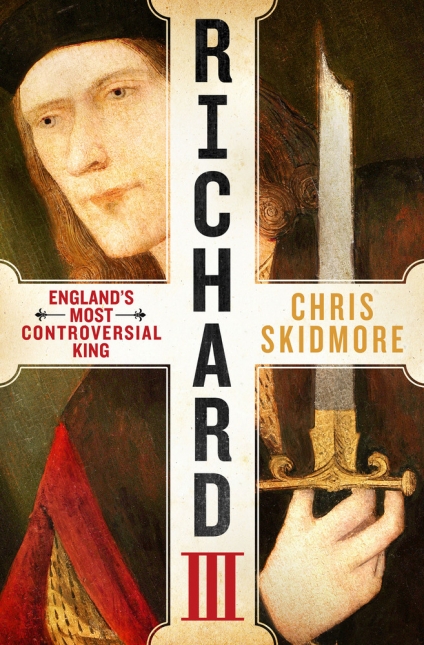 This new biography labels Richard III as “controversial.” Most informed folks today would call this a misrepresentation, as not a lot of pro vs. con debate attaches to Richard’s reputation nowadays (except perhaps in the shelf-appeal fantasies of this biography’s publisher).

But is it possible that our view of this 15th-century monarch has been swayed by Shakespeare’s honeyed disdain for a king he portrays as a murderous, throne-usurping Machiavel?

Over the years, we’ve come to know Richard as unremittingly evil, a duplicitous hunchback who hypocritically seduces the widowed daughter-in-law of King Edward VI, later has that very queen eliminated, and then arranges the deaths of the Princes in the Tower to boot. He’s also the English ruler who, teetering on the precipice of violent death at Bosworth, supposedly offers “my kingdom for a horse.”

But these commonplaces, served up so brilliantly by Shakespeare, are supported by little more than contemporary rumor.

In Richard III: England’s Most Controversial King, author Chris Skidmore examines all these hostile indictments in the bright light of available data. He does so with sharp writing and a marvelously exhaustive command of contemporary documentary sources.

Extant records from the late 15th century are surprisingly plentiful, and they range from government documents (writs, proclamations, benefices, and account books) to historical chronicles, courtiers’ dispatches to rival nobles and foreign rulers, and the collected correspondence of high-ranking families (e.g., the famous Paston letters).

For readers of a scholarly bent, Skidmore’s book can seem admirably thorough, while the casual reader might feel overwhelmed by the level of detail and stunning range of sources the author rounds into a comprehensive chronicle of his subject’s short life. (Richard was killed at age 32, after just two years on the throne.)

Skidmore approaches Richard’s biography with an eye for what’s known and also what’s unknowable. The thoroughness of his research tends to slow the pace a bit, especially during the first half of the book. On the other hand, there are many compelling stretches where the author weaves the swarm of facts he presents into rich portrayals of the politics of the age.

Skidmore describes a nation where noble families and North vs. South factions contend relentlessly, and often murderously, for land, royal preferment, and riches. He deftly draws back the curtain on the late-15th-century’s splendorous elitism to reveal the brutishly bloody arena of last-gasp British feudalism and dynastic struggle.

In the author’s hands, there’s no lack of thrilling details in Richard’s saga, among them his steadfast loyalty to his brother King Edward IV, even as another brother — far more exalted and rewarded by the king — leads an open and unsuccessful rebellion against the monarch.

Later, Skidmore vividly captures the pivotal events surrounding the death and burial of the same Edward IV, and the subsequent maneuverings by rival factions to control the dead king’s 12-year-old heir.

Richard’s downfall, ultimately, is triggered by his move to take charge of the prince and his younger brother; to “protect” them in the Tower of London; and then to have himself crowned king. Outraged rebellion breaks out when the two captive princes mysteriously disappear.

Skidmore makes the climactic battle come alive in striking detail. Henry Tudor, de facto leader of the Lancastrian forces, wins out and becomes King Henry VII, founder of a dynasty that would last 118 years — one that would number both Henry VIII and Elizabeth I among its exemplars.

Richard’s bad rap likely originates long before Shakespeare: in the energetic self-promotion mounted by boosters of the new Tudor regime. Thirty years after the seminal clash at Bosworth, scholar-courtier Thomas More, keen to secure preferment as an advisor to Henry VIII, embarks on his own biography of Richard.

More’s Life portrays the widely disgraced monarch, inaccurately, as a foul and ugly hunchback, and also — in this case, with more fidelity to the truth — as a “malicious, wrathful, envious” usurper.

The ambitious More, mobilizing a strain of dynastic propaganda ideally suited to the early days of printing, aims to create a righteous halo around the Tudor reign. (This is some 15 years before his own famous falling-out with Henry.)

Eight decades later, Shakespeare draws on More’s unfinished Life and, alert to the appetites of the groundlings, sketches in a few stagey hallmarks cribbed from the evil avatars depicted in the morality plays of the day (and, for that matter, in allegorical Tudor court “interludes”).

He seems to have eyes on the favor of Queen Elizabeth, the last of the Tudors. Again, the endgame (setting aside his play’s breakthrough dramatic brilliance) is to discredit Richard and lionize Gloriana’s grandfather, founder of the Tudor line.

And, so, the Ricardian “brand” has persisted to our day, a powerful tide unyielding to occasional scholarly attempts to resist it. Chris Skidmore paints a more complex, though not necessarily kinder, picture than today’s prevailing take on Richard.

His biography bids fair to become the definitive account for the 21st century, and one that should nudge Richard’s reputation away from rumor, propaganda, and shared misconception back into the realm of concrete historical data.