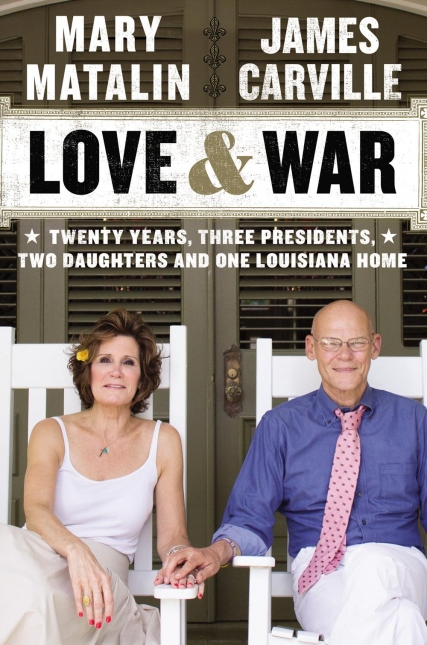 James Carville, a former chief campaign strategist for President Bill Clinton, and Mary Matalin, who worked in both Bush White Houses, are truly sleeping with the enemy, yet they celebrated their 20th anniversary last year. Love & War, the second book co-written by political polar opposites Matalin and Carville, is more a love letter to New Orleans (and, in Matalin’s case, to Dick Cheney) than to each other. On occasion, it’s hard for the reader not to feel like a beleaguered marriage counselor with angry but generally respectful aggrieved parties at each ear.

They’re often asked for the secrets of their success and at least some of the answers are here. The most important factor may well be in the epilogue: “nobody says you have to carefully read and consider every sentence your spouse writes; a quick cursory skimming of their ravings might be enough.” Perhaps tellingly, the epilogue is one of very few sections where who wrote what isn’t clearly delineated.

For the most part, Love & War covers the period since their first book — the similarly titled All’s Fair: Love, War and Running for President — was published in 1995. Not surprisingly, quite a few pages are devoted to the 2000 presidential election. It’s one of many things Matalin and Carville will never agree on; she says Bush won and he says Gore did.

During the Clinton administration, Matalin attended high-profile events, which she described to be “like sticking hot spikes into a wound and twisting the skin and pouring vinegar on it” with Carville. In January 2001, however, Carville was the frustrated one, and after George W. Bush took office, Carville said, “I hope he doesn’t succeed” (eight years before Rush Limbaugh famously expressed the same sentiment about Barack Obama). To this day, Carville bristles that 9/11 wouldn’t have happened if the Supreme Court’s election decision had gone the other way, reasoning that the detail-obsessed Gore would have read the briefing reports warning of terrorist capabilities.

Almost immediately after the Supreme Court made a final decision on the election, after more than a month of stop-and-start recounts in Florida, Matalin went to work for incoming Vice President Dick Cheney. Matalin’s fawning over Cheney in Love & War could make anyone’s eyes roll: Among other things, he’s “brilliant,” “a seasoned, mature politician who didn’t have his own agenda” and “everything I admire in a man and a leader.” She admits to being his “groupie,” delighted to be “at the elbow of the greatest font of historical and practical knowledge, one Richard B. Cheney.”

The very long chapter “The Dark Ages” — which includes a fascinating recollection of Matalin joining Cheney in the safe room deep under the White House as the events of 9/11 unfolded — is aptly named because it describes the time Matalin worked in the George W. Bush administration as a challenging period for Matalin and Carville’s marriage. The Iraq War led to prolonged silence in their household.

Both Matalin and Carville have plenty of experience with the media and are familiar presences on television, and both claim that the other side (Democrats in Matalin’s case and Republicans in Carville’s) is intolerant of news reporting that doesn’t mesh with preconceived notions, although Carville maintains liberals are more likely to give opposing views a listen.

Matalin, while praising Fox (“straight shooters”) and Limbaugh, is contemptuous of journalists in general and accuses them of trafficking in “sweeping assumptions and global statements patched together from scraps of misinformation.” But later, she complains about having to be a source responsible for dispensing talking points in a way that made “processed canned food taste garden fresh.” In perhaps one of the book’s most eye-opening admissions, she says, “And then there’s the sworn duty of professional journalists: resolute objectivity. Sorry, that’s just not my scene.”

Carville notes that the “Crossfire” television show — where both he and Matalin were regular political discussion panelists — helped viewers beat the myopia caused by media fragmentation: “At least you had to face the other guy. My job was to defend or articulate a position. Not just to preach to the choir.” It’s an attitude he says he brings to his current work teaching political science at Tulane University in New Orleans, assigning students to defend views of issues regardless of personal stances.

Surely, given the couple’s public differences of opinion, their relationship must be based on seeing everything eye-to-eye in their private life together. Mmm, not always. It turns out Matalin’s an animal lover who lets her daughter’s pet rats perch on her shoulders as she cooks, but Carville has no soft spot for critters and confesses he singed the whiskers of one of their cats by turning on a stove burner.

One thing they completely agree on is the magic and importance of New Orleans, where they moved to in 2009 with their two teenage daughters, after tiring of the Washington lifestyle. Carville grew up in Louisiana and “wanted to get back home before home disappeared,” while Matalin had long loved the slower pace of the unique city where the couple’s 1993 wedding was followed by a Mardi Gras-style parade. They hoped to help hasten the Big Easy’s comeback from Hurricane Katrina, and their high-profile efforts have included serving as co-chairs of the 2013 Super Bowl, played in the same indoor stadium where thousands of New Orleans residents sought shelter during the catastrophic storm. When the nearby Gulf of Mexico was sullied by an 87-day oil leak following an explosion on the Deepwater Horizon rig leased to BP, Carville was among the loudest indignant voices demanding bigger and better responses from the petroleum company and the U.S. government.

While it’s heart-warming to read about the affection Matalin and Carville have for New Orleans, their children, various political candidates and causes and each other, the epic conflicts between the two colorful characters are what make Love & War riveting.

Randy Cepuch is a longtime Virginia election officer and the author of A Weekend with Warren Buffett and Other Shareholder Meeting Adventures (Basic Books, 2007).

Bridge to the Sun: The Secret Role of the Japanese Americans Who Fought in the Pacific in World War II

Unsung soldier heroes finally get their due.