American Caliph: The True Story of a Muslim Mystic, a Hollywood Epic, and the 1977 Siege of Washington, DC

A propulsive account of a Carter-era hostage situation in the District. 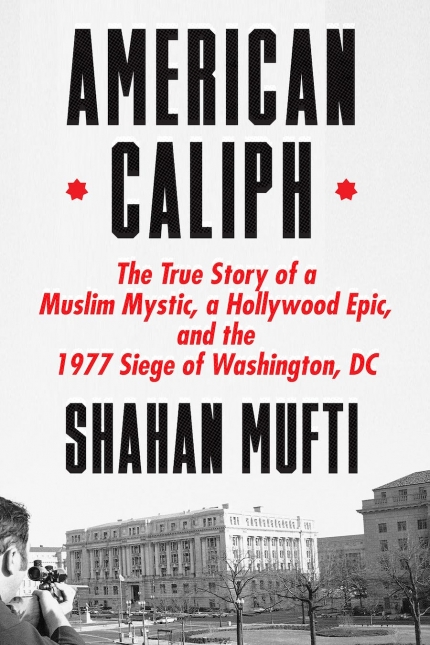 To provide background for his immersive tale, author Shahan Mufti describes the development and increasing militancy of Islam in the Black community. The independent culture of Elijah Muhammad’s Nation of Islam was initially a positive force, but it quickly began to splinter amid dissent. Second-in-command Malcolm X parted company with Elijah and criticized the Nation. After he was assassinated by Elijah’s followers, relations between the Nation of Islam and its brethren in the Hanafi Movement — a DC-based African American Muslim group — festered.

Soon, a team of killers known as the Black Mafia was sent to Washington to punish the Hanafi for an alleged insult directed at Elijah Muhammad by Hanafi leader Hamaas Abdul Khaalis, who suffered lifelong mental-health issues that led to his discharge from the U.S. Army. On January 18, 1973, the Black Mafia broke into Hanafi headquarters on upper 16th Street, NW, and went on a rampage. They killed seven Hanafis (including members of Khaalis’ family) by mutilating those present and drowning three infants.

Subsequent murder trials of the Black Mafia ended in mistrials, leaving Khaalis to conclude that the only justice would come at the hands of the Hanafis themselves. On March 9, 1977, they took their revenge. A little after 10 a.m., Khaalis’ team stormed into the B’nai B’rith Center at the corner of 17th Street and Rhode Island Avenue, NW. After random slashings, stabbings, beatings, and shootings, the Hanafis subdued and bound 128 hostages who were threatened with decapitation if they tried to escape.

Khaalis then introduced himself to the captives, saying, “There are no innocent victims in a holy war…you will pray to your God and be prepared to die.” This particular “holy war,” however, seemed to be fueled by nothing more than standard antisemitism and Islamic support of the Palestinians against the state of Israel.

The Hanafis staged two other attacks that same day. One occurred during the afternoon Zuhr prayer at the Islamic Center on Embassy Row; the other was at the District Building, where the newly independent DC government was working. The hostages at the Islamic Center were men caught while praying on their knees. At the District Building, a Howard University radio station reporter was killed, DC Council member and future mayor Marion Barry was shot, and several employees were taken hostage.

A few members of the DC Metropolitan Police knew Khaalis from the 1973 massacre at Hanafi headquarters and had established a friendship and mutual trust with the Muslim leader. They immediately contacted him as friends, asking to start negotiations for the release of the hostages.

Khaalis agreed to free the captives under three conditions: one, that the premiere of the allegedly blasphemous movie “Mohammad, Messenger of God,” set for March 10th in New York, be canceled and the film destroyed; two, that Khaalis be reimbursed for the $750 he’d paid in a court-related fine during the 1973 murder trials; and three, that the Black Mafia members who’d killed his family, plus the men who murdered Malcolm X, be turned over to the Hanafis for a Sunni Islamic trial and the carrying out of any resulting sentences.

The first and second conditions were possible; the third, of course, was not.

Khaalis demanded to negotiate with co-religionists along with the police, and he also asked that the ambassadors of Iran, Egypt, and Pakistan be present. Providently, all three Muslim diplomats joined police at B’nai B’rith to speak with Khaalis. After many hours and many readings from the Koran, a settlement was reached. Khaalis and his men would let the hostages go and then be arrested, charged, and released on their own recognizance to await trial. Ultimately, Khaalis would be convicted of his role in the attacks, receiving a sentence of 21 to 120 years. He died in prison in 2003.

(A week after the siege, Rabbi Meir Kahane, leader of the militant Jewish Defense League, came to Washington to hold an anti-Hanafi rally, which surely would’ve inflamed the tenuous peace between the city and the Hanafis. After some backroom machinations, Kahane was escorted to the airport, and the rally was canceled amid a collective sigh of relief.)

Many well-known celebrities have cameos in the book, including boxing great Mohammad Ali, a devotee of Elijah Muhammad and the Nation of Islam. Kareem Abdul-Jabbar, the 7’2” basketball superstar, was a friend of Khaalis and had given large sums of money to the Hanafi Movement. And surprisingly, Libyan leader Muammar Gaddafi was a sponsor of the “Mohammad, Messenger of God” movie at the urging of its Syrian producer.

The trials of the Black Mafia and the Hanafis are covered to great effect in American Caliph. Mufti, a journalist, uses sound research to bring the details and emotions of the events vividly to life. For those of us who lived in DC at the time of the sieges, the book is a stark reminder of how lucky we were that more blood wasn’t shed. The peaceful resolution of the crisis was a tribute to the police, the prosecutors, the court, the religious leaders, the ambassadors, and the many community members who all stepped up to help.

Paul D. Pearlstein is a retired lawyer whose office in 1977 was on the same block as the B’nai B’rith headquarters.