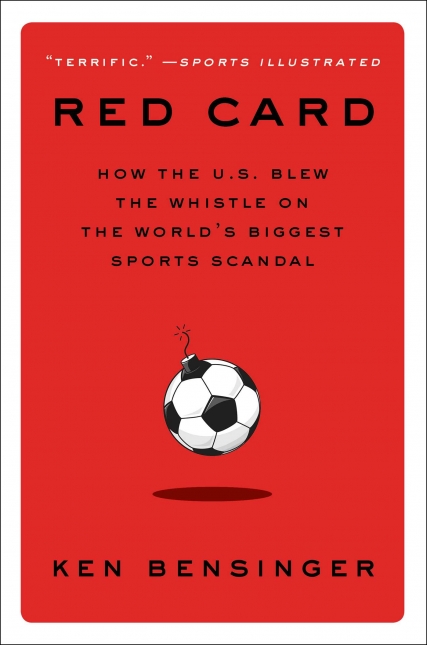 Early on in Red Card, a tale of pervasive and systemic corruption at the highest levels of international soccer, we’re reminded, via the example of Al Capone — the notorious gangster who was ultimately brought down by a government accountant — that a small detail can unravel a whole scheme.

And, sure enough, that’s what we’ve got here: a 21st-century remake of “The Untouchables” minus Eliot Ness’ band of relentlessly incorruptible federal agents raiding speakeasies and fighting machine-gun battles from the running boards of Chryslers and Model A Fords. In other words, minus the drama.

Now, as then, the Justice Department’s investigation turns on the work of a government number-cruncher: in this case, IRS agent Steve Berryman. Working out of a nondescript office in California, Berryman happens onto the case of Chuck Blazer, a high-ranking official of FIFA, soccer’s world governing body, and CONCACAF, its North and Central American subsidiary.

Wildly bearded and obese, Blazer occupies not one but two $18,000-a-month apartments (one for him, and the adjacent unit for his cats) on the 49th floor of Trump Tower in Manhattan, keeps a condo in Miami, and dines alongside the New York elite at Elaine’s — all on pro soccer’s dime.

Oh, and one other thing: Much to Berryman’s excited surprise, he discovers Blazer hasn’t paid a nickel in taxes — or bothered to file a return — in 15 years of skimming millions from all manner of soccer transactions.

Armed with that knowledge, and the RICO statutes designed to combat organized crime, it’s only a matter of time before Justice Department attorneys and Berryman’s FBI counterparts get Blazer to plead guilty to tax evasion and turn cooperating witness — even wearing a wire to implicate unsuspecting former co-conspirators.

After that, in the words of the Watergate mole known as Deep Throat, they “follow the money,” flipping one dirty mogul to get to the next.

Bribery, it turns out, is the stock-in-trade of international soccer officials: bribes for the sale and re-sale of broadcast rights, marketing rights, and sponsorship rights.

With six regional governing bodies and 200 national associations within FIFA, there are lots of folks with their hands out, and hundreds of millions of dollars being wired to the Cayman Islands or numbered Swiss bank accounts. Even the right to host the biggest international tournaments, like the World Cup being played now in Russia — the home team is in the process of upsetting Spain in a knockout-round shootout as I type this review — is for sale for the right price.

The investigation lasts six years; by the time it’s over, soccer kingpins like Blazer are tripping over each other in the rush to cooperate with authorities. Of the dozens of officials indicted and extradited to the U.S., all but three plead out, and two of the three holdouts are convicted.

It’s all very civilized. When Berryman interviews soccer insiders he already knows are likely to wind up on the federal griddle, he tries to put them at ease. Nothing to worry about, he assures his prey. Just another tax case.

And he’s not wrong.

The financial stakes are huge — it’s not unusual for individuals copping a plea to make restitution for $150 million in bribes. And there are some potentially delicious characters on the investigation’s periphery. Vladimir Putin’s here, lurking smugly in the background, having already bought himself the World Cup; and Christopher Steele — yes, that Christopher Steele, of dossier fame.

But keeping up with all the overlapping trails of corruption — the book opens with a three-page flowchart of soccer robber-barons and their pursuers — could leave readers as exhausted as the over-burdened prosecutors and agents working the case, only without the payoff.

There’s a reason, after all, that case studies of white-collar crime are rarely as sexy as shoot-‘em-up tales of cops and robbers. And once you’ve heard one story of a soccer impresario who sells his vote to the highest bidder for a life of moneyed ease, you’ve pretty much heard them all.

Soccer fans will find it ironic that the United States, a country that historically has cared least about the sport, bares the corrupt underbelly of the soccer universe. They will also know the book’s title is a reference to the colored cards signifying immediate ejection for the most serious on-field fouls. But there’s no soccer action to be had here — no mind-bending goals, heart-stopping saves, fouls, or extra-time shootouts — and precious little action of any other kind.

The only battles in Red Card are jurisdictional, between the U.S. authorities and typically territorial police in Europe or South America; or between investigators and those famously discreet Swiss bankers.

So, at least until the movie comes out — Ben Affleck and Matt Damon are attached themselves to the film rights — the crusade to clean up international soccer will remain, as Steve Berryman might say, just another tax case.

Jay Price, a longtime columnist for the Staten Island Advance, is the author of Thanksgiving 1959. He coaches high school football in Manasquan, NJ.

A chronicle of the famed writer’s 11-month lecture tour across the continent in 1882.