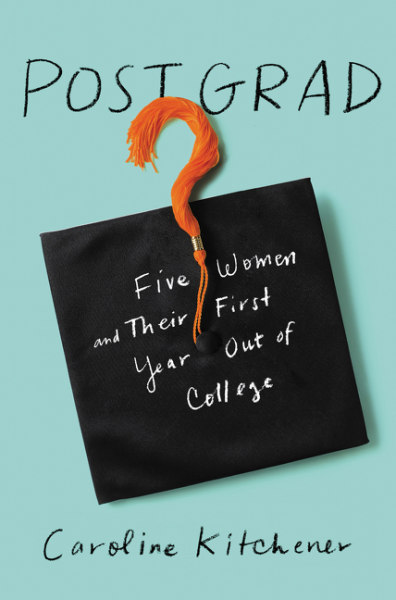 Uncertainty, excitement, surprise over unexpected events — these feelings are nearly universal after graduating college. Regardless of our plans, almost all of us experience some amount of trepidation as we move from a defined setting into the wilds of adult life.

Caroline Kitchener spent a year documenting this process in four of her classmates, as well as in herself. Part memoir and part narrative essay, Post Grad explores how these five young women adjust to life after graduating in 2014. The rarefied lens through which she observes these experiences, however, takes what could have been a relatable set of stories and leaves them as vignettes of privilege with a few rough patches thrown in.

At the outset, Kitchener states that she is not trying “to make sweeping generalizations about our generation.” She recounts their stories without attempting to posit any grand theories or draw big conclusions, and her recognition of her small sample size is sensible. But from the moment the book begins at Princeton’s elaborate graduation ceremony — itself a three-day extravaganza — we get the sense these stories may be unusual.

The women scatter to different parts of the country: New York, DC, Philadelphia, the Pacific Northwest. They look for jobs, grad schools, and above all, communities of people. A loss of mooring and a search for community to replace the collegiate one left behind suffuse this book and bind the stories together.

Trials and tribulations ensue. Alex is miserable living across the country from her girlfriend; Denise struggles with her MCAT and medical-school applications; and Caroline has a hard time making friends. As their year unfolds, we find out more of each woman’s backstory, and we see how their childhoods, parental relationships, and personality quirks factor into their decisions.

Three of the women come from extremely wealthy families, but all five benefited from parents who had the means to shuttle them to and from activities that enhanced their college applications and helped them get into an elite university.

Helicopter parenting is a theme throughout the book, although it doesn’t seem like one the author meant to point out. But I found these stories were just as much a commentary on millennials’ parents as they were on the millennials themselves. Whether emotionally abusive and childish, or supportive and level-headed, the parents here exert outsize influence on their daughters.

Which brings me to another theme: Millennials don’t deserve the “snowflake” label they’re so often branded with, but the stories in this book are the reason that label has such staying power. These young women require constant validation once they’ve left the bosom of Princeton, and they seek it from everyone in their lives, whether it’s their families, their classmates, or even strangers.

The questions they struggle with are the same ones faced by so many women: Am I focusing too much on my significant other? Where do I belong? What career is right for me? But a striking lack of self-awareness, particularly in the author, leaves these questions largely unanswered and experiences not reflected upon.

I seized on her early statement — “The first year out of college is a hard year. For me, it was the hardest year” — because it was written after less than three years out of college. If only someone could tell her how many harder years are still to come. Every time Kitchener recounts a fight with a loved one where she storms off to her bedroom and slams the door, it reminded me how young this person really is, and that she doesn’t seem to realize it.

Additionally, these women agonize over every decision at a time in their lives when most of us are just trying to make the rent or repay our student loans. Sure, it’s hard to know if you’re moving in the right direction, but it’s a lot easier to wonder about (and travel to see what your friends are doing) when finances aren’t a concern.

Money may not buy happiness, but it certainly buys these women the time to figure stuff out.

The problem isn’t that this book is about the 1 percent; the problem is the author’s lack of awareness that there is a 1 percent. No, she’s not in this to make grand conclusions, but it takes over 100 pages until she even muses that maybe wealth made her and her subjects “less self-sufficient than many of our less affluent peers.”

After that, it’s never mentioned again.

If Kitchener showed even the slightest awareness that they enjoyed unique privileges and opportunities just by virtue of graduating from an Ivy League school, the stories might have been anchored in a more relatable context. As it stands, this book only speaks to a tiny fraction of the population: upper-class women who graduated from elite universities. For the rest of us, it shows life can be hard even for the very wealthy, but their challenges happen in a space free of the issues most women face.