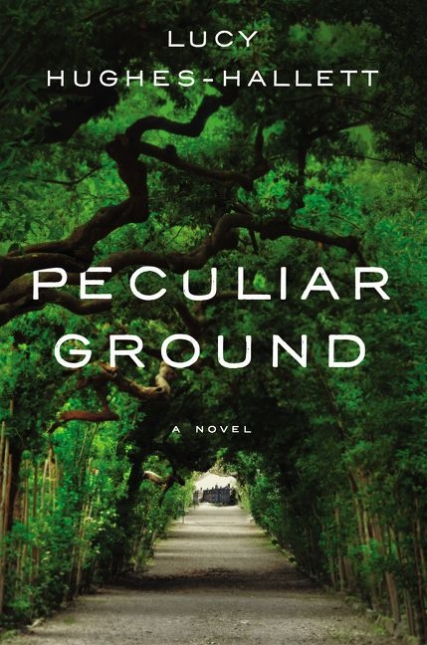 Award-winning biographer Lucy Hughes-Hallett yields both promise and confusion in her debut novel, Peculiar Ground. While the prose is beautifully studded and excels in arresting, delicate metaphors ("A thousand spiders had made of the lawn an expanse of lace"), the story itself is long and somewhat perplexing midstride.

The book is divided into epochs marked by notable events. It starts in the mid-1600s, after the beheading of Charles I at the climax of the English Civil War. At this point, Charles’ son, Charles II, has spent years living in exile, primarily in France.

Subsequent to the reign of Charles I, Oliver Cromwell served as Lord Protector of the Commonwealth of England, Scotland, and Ireland. After an ensuing political crisis following Cromwell’s death, Charles II returned to England, where he was restored as monarch in 1660.

Hughes-Hallett’s story begins in 1663 on Wychwood Estate. The principal narrator is an amiable landscape architect, Mr. Norris. He arrives with a pair of peafowl and a bucketful of goldfish to accept an assignment from Wychwood’s owner, Lord Woldingham. Norris is tasked with creating garden designs, artistic structures, and, eventually, a wall to separate Wychwood from the surrounding English countryside.

Norris speaks the language of his time, and Hughes-Hallett expertly infuses his vocabulary with derivatives of the period, necessitating a hefty dictionary — or a fast internet connection — to define the meaning of words like catafalque (an ornamental structure supporting the coffin of a deceased prominent person lying in state), tussock (a thick tuft of grass), and parterre (an ornamental garden), among others.

Section I of Peculiar Ground covers three centuries (1663-1961), from the return of the king and select nobility (as represented by the Bolingworths) to their lavish family estate. Having endured the tumult of the Reformation, the Bolingworths long to guard against the hoi polloi by building an immense protective wall around Wychwood.

Section II leaps to the 20th century. Spanning 1961 to 1989, this part of the book opens with a hunting party at Wychwood, now owned by the wealthy Rossiters. They are distressed that commoners have discovered an old road crossing the property and that hundreds of "townies" are threatening to walk on their treasured land.

These unwelcome interlopers will breach the grounds, to say nothing of how their onslaught could threaten the adventure associated with pheasant-hunting. The pheasants, the hunting party argues, will be "disturbed before the drive," and the bird dogs will be "confused." And there is another potential calamity: "You're going to have to be careful not to shoot these ramblers," a guest tells Rossiter.

In this section, the reader also meets a varied cast of characters visiting the Rossiters, including a journalist named Nicholas, who is covering the construction of yet another wall — the Berlin Wall, which was started in 1961, and which would fall in 1989.

In section III, set in 1973, Hughes-Hallett continues the theme of walls — walls that protect and walls that imprison. All the while, she never forgets the individual stories of those who reside on either side of these physical and figurative barriers.

The overall effect is one of an enormously ambitious novel (evocative of Faulkner’s The Sound and the Fury) which arrests readers with its complex, non-linear plotline and occasionally demands too much of them in the process.

The author includes an introductory Dramatis Personae, which the reader needs and could have used in even more detail. As common as it is to repeat names of people across generations (as well as the names of their dogs), the practice in the narrative is confusing and distorts the focus of the storyline.

Toward the end of the book, the reader tracks back more than three centuries to meet, once again, the affable Mr. Norris, who notes with satisfaction the burgeoning development of his garden beds, trees, and structures. He is a droll philosopher and a seasoned observer who, by now, has fallen in love.

But catastrophe is in the air, as the last major bubonic plague sweeps across Europe, and Londoners are fleeing the city and spreading the pestilence. Lord Woldingham's response at Wychwood is to seal its walls against intrusion, and then, after the epidemic abates, to open its gates (with a festival picnic and a theatrical performance) to the commoners who’ve been locked out for two decades.

Hughes-Hallett's descriptions of the plague are luminous and may provoke the reader to look into 20th-century discoveries of those hastily buried (several persons deep) in the 1600s, and whose DNA still carries Yersinia pestis, the bubonic bacterium.

All in all, while admiring the author's descriptive talent and impressive historical scope, the reader feels a measure of relief when the lengthy book ends and s/he is no longer obliged to wander across the ancient tussock of a land well named Peculiar Ground.

Janet Martin is a journalist whose career experience includes national magazines, features in public affairs shows for PBS television members in Georgia and Virginia, and CNN. She is the author of a seasonal fable entitled The Christmas Swap and is currently in the finishing stages of a book of historical fiction set in Atlanta about four Southern girls coming of age in the 1960s.