Willful Disregard: A Novel about Love

A tale of unrequited amour and hopeful delusions 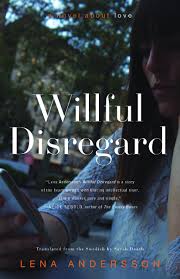 Swedish journalist and five-time novelist Lena Andersson’s most recent work of fiction, Willful Disregard, is subtitled A Novel About Love. A better description might be “a story about the power of hope.” Which sounds like a good thing, reminiscent of Emily Dickinson’s thing with feathers — until it isn’t. And it definitely isn’t a good thing when hopefulness morphs into baseless fantasy in the face of unrequited love.

Andersson’s novel follows this old familiar path. Her story is a riff on Marianne Dashwood’s behavior in Sense and Sensibility as she shoots off missives to Mr. Willoughby at all hours and wonders why she hears nothing back. It’s three-quarters of the “Modern Love” columns in the Sunday New York Times (particularly the ones where wooing takes place in shorthand social media comments and text messages left unanswered). And it’s the entire plot of the book and film begat by one brief scene of HBO’s “Sex and the City,” in which a beau of Carrie Bradshaw’s offers a stark truth about why a date hasn’t called back: He’s just not that into you.

End of story — except that it hardly ever is.

Therein lies the unfortunate framework for Willful Disregard’s narrative arc. It begins with the introduction of writer and minor academic Ester Nilsson. Described by Andersson’s highly observant narrator, we are provided a quick sketch of Ester and her ascetic world, wherein she eschews a life of frivolous expenses and spends all her mental energy crafting acutely precise prose and poetry.

From the very first page, Andersson’s omniscient voice casts a sharp eye and wields a biting wit on Ester’s behavior — which, at every turn, undercuts our heroine’s seemingly rational actions and thoughts, along with her imagination run amok.

In essence, the clear-eyed narration in Willful Disregard makes a mockery of Ester’s flawed logic. If Ester thinks it, it must be so, is our narrator’s conceit. This provides the reader with both a seemingly rational version of Ester’s thoughts and actions, alongside a sizzling satire on her hopelessly hope-driven perceptions.

“The dreadful gulf between thought and words, will and expression, reality and unreality, and the things that flourish in that gulf, are what this story is about,” the narrator advises us. And so, gentle reader, consider yourself forewarned: twisted logic is about to be skewered. Prepare yourself for a bumpy ride!

The would-be love story begins when Ester receives a request to give a lecture on Hugo Rask, a famous contemporary artist and philosopher. Ester accepts the assignment for the cash and the academic cache, and sets off on her research as a purely professional undertaking.

That said, she wants to be particularly erudite, since Hugo Rask himself will be in attendance when she delivers her talk. As Ester digs into the breadth of Rask’s work, her affinity for her subject grows. She has no knowledge of the man himself (Aha! Except in her imagination, our narrator reminds us!), but that’s neither here nor there. Intellectually, there is so much to admire, so many truths to behold. By the day of the lecture, it would seem that Ester can think of little else but the man she has come to know so well, in books and on her computer screen.

The day arrives, the lecture is given, and Rask, the man himself, is enchanted by his new muse. “No outsider has ever understood me so profoundly and precisely,” he gushes to Ester after her talk. His words could not possibly be more pleasing to her intellectual ears — or her schoolgirl crush.

Clearly, she concludes, she has become one half of a match made in heaven. Her observations have been based on his thoughts, his mind, his truths, and she has unlocked the door to his heart. Ergo, there could be no mistake — his enthusiasm for her understanding is surely a first step towards a love affair for the ages.

What follows are the inevitable missteps. One after another, starting with Ester’s confusion of gratitude for love, and of research for true knowledge. That, and mistaking a man who wants to please, and who exists to be admired, for a person who might be available to her for anything approaching actual love.

“Bitingly funny and darkly fascinating” are descriptors that have been used to describe Andersson’s writing in Willful Disregard. Well, yes, if you stick to the narrator’s Austen-esque commentary and skim over the plot on the ground. Because the plot is the sad stuff of a lonely heart waiting by the phone, trying to make sense of things that don’t add up.

Ester’s complete incapacity to disengage, to even concede that her relationship to Hugo is no more than her own personal fantasy, is painful to observe. Even with Ester’s Greek chorus of girlfriends chiming in with dire warnings, our heroine is hell bent on seeing this relationship through to the end. Her greatest mistake is in assuming that a relationship exists at all.

Would that Carrie Bradshaw’s beau had shown up in chapter one and saved Ester a whole book full of heartache. Or would that Ester had read to the end of Emily Dickinson’s poem:

"I’ve heard it in the chillest land,
And on the strangest sea;
Yet, never, in extremity,
It asked a crumb of me.”

Perhaps the lesson of hope, for Ester and from Dickinson, is that anything that is so infinitely and boundlessly available must be considered a potential parasite. Best to pay attention to our Greek chorus. And would that we all had such an inscrutable narrator inside our heads as the one Andersson gives us in Willful Disregard, a novel about a lesson that needs learning.

KH Macomber lives in Cambridge, MA, with the love of her life, who always answers her texts pronto.

After tragedy strikes an all-girls school, students come face-to-face with its secrets.