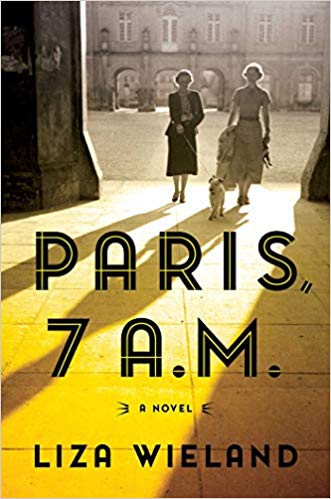 The magnificent Paris, 7 A.M. is clearly announced as a work of fiction, which gives it a different kind of accountability than if were marketed as a biography. Still, the idiosyncratic narrative is so compelling in its details, characterizations, and settings that one must wonder what is invented and what, if anything, is misrepresented for convenience.

If it were a biography, readers might ask why the real-life poet Elizabeth Bishop seems to be celebrating her European tour following graduation from Vassar a couple of years later than her actual 1934 graduation.

Perhaps she awaited the availability of her friends so that they could share the experience.

Friendships, acquaintanceships, and — more generally — useful connections are important in defining Elizabeth, and the namedropping in the book is certainly flavorful. One connection is the already established poet Marianne Moore (“Miss Moore”), whose mother is an influence as well for the waif-like Elizabeth, who hardly knows her own parents.

Elizabeth crosses the Atlantic on a German ship with her friend Hallie, and they await other Vassar girls: notably Margarite Miller, the young painter who lost one hand in an accident and who rebuffed Elizabeth’s overtures of love; and risk-taking Louise Crane, who seems the most outgoing of the group and whose mother co-founded New York’s Museum of Modern Art. Eventually, Paris indoctrinates the friends into the offerings of that city and its surroundings.

If there is a word to capture the essence of Elizabeth’s personality, it is reticence. She manages to distract herself from confronting, let alone expressing, her strongest feelings. She douses expectations. She belittles her fledgling avocation as a poet. She numbs herself, again and again, with alcohol.

Yet, as Wieland reveals in a series of well-timed, powerful scenes, Elizabeth has a great need for physical and emotional intimacy with other women — a need that, in the major sections of this book, is often frustrated. She is especially attracted to Sigrid, one of a trio of young German women working in Paris.

Elizabeth admires and is befriended by Clara Longworth de Chambrun, director of the American Library in Paris. The library, a plaything for this enormously wealthy woman, is a networking center for the vacationing and expatriate American community. Clara has connections with other important Americans, and she introduces Elizabeth to the legends: bookstore owner Sylvia Beach and salon hostess/author Natalie Barney. (At Beach’s store, Elizabeth reads her poem “Paris, 7 A.M.,” but the response is far from overwhelming.)

Clara is also Elizabeth’s guide to important places on the visitor’s tour. She treats Elizabeth like a daughter, a replacement for the daughter who had died some years past. There is an attraction as well as a troublesome tension between them. Clara cannot replace the mother Elizabeth never had.

The author does a great job of inhabiting Elizabeth through a narrative voice that borders on — but does not efface — the main character’s voice. Wieland employs a present-tense narration that keeps readers close to the action, both exterior and interior. In dialogue, private utterances, and thoughts, she avoids quotation marks, softening the border between narrator and characters. A quality of understatement generates unusual energy.

The adventures of the college grads are set against the growing fear — almost certainty — of Nazi Germany’s takeover of France and other European nations. There is already a resistance of sorts to the menace Jews are facing. Through Clara, Elizabeth becomes part of an operation to smuggle Jewish children into a local convent. Elizabeth carries Marta, a young girl, and this risky interlude offers Elizabeth a glimpse of motherhood.

The key year of 1937, just ahead of Kristallnacht, contains several brief sections that follow Elizabeth intermittently through the following decades, until 1979. These snapshots are extremely successful in projecting the Elizabeth readers have come to know into early middle, middle, and old age.

There might just be another inspiration that will lead Liza Wieland to enhance these vignettes into a separate novel, with Elizabeth Bishop’s literary career and her two important personal relationships as the centers of interest.  Meanwhile, what she has done here — in scope, craft, and sensitivity — is superb.

The Sea Queen: A Novel