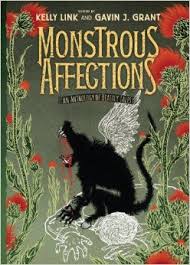 Even good monsters want to consume you. Bad ones want you to know it will happen, and they hope you’ll watch. Fifteen tales of good monsters and bad ones fill Monstrous Affections: An Anthology of Beastly Tales. The collection, which is aimed at young adults, holds a fiendish appeal for older readers, too.

The world-building can be intense. Survivors in G. Carl Purcell’s “The Mercurials” aren’t as smart as they would have been if the aliens hadn’t invaded. Loud noise stops the Mercurials from invading your body, so heavy metal music is society’s organizing principle. This isn’t the premise of a farce, but one for a story that’s as dark as any that involves culling people for the good of the community.

“Son of Abyss” by Nik Houser contains the most extreme world-building. To begin, “It was Mom’s idea for me and Dad to build the blood altar in the garage.” Things don’t go well for Mom, but not because of the altar. After her death, Samaeul and his father must learn how to live together.

“I opened my mouth. Dad whistled between his filed fangs…‘You need to file those teeth down, young man. Tonight. You’ve chewed your cheeks to ribbons.’”

Everyone participates in the Day of Transgression, a holiday designed to ensure no one is condemned to the prison of heaven. In Samaeul’s world, high school teachers watch students fight and torture each other. Doing so helps the teachers decide what future career might be best for each student. Samaeul realizes he can’t just stand by, though. “Son of Abyss” forces the reader to contemplate the meaning of heaven, hell, and sacrifice.

Aimed at young adults as this collection is, most stories start with main characters already in substantial transition. In “The Diabolist” by Nathan Ballingrud, Allison’s father has just died, and he’s left behind some of what he’s summoned from the depths.

Because of her father’s work, Allison has always been isolated from others her age. Now that he’s gone, she must decide how much of his mantle she wants to assume, and she has to deal with the imp. Brilliantly told in the second person, this story gets under your skin not only because of the point of view, but also because of Allison’s easy-to-imagine detachment and brutal approach to life. “The Diabolist” reminds you that monsters feed off of each other.

Despite the universal strength of character transitions, a couple of stories, like Nalo Hopkinson’s “Left Foot, Right” and Cassandra Clare’s “Old Souls,” take too long to build steam. These should be more compelling tales given that one is a modern retelling of a creepy Trinidad and Tobago folktale, and the other concerns a young woman’s tumultuous, vampire-laced summer.

The shortcomings of this collection are few, though. More likely, you’ll encounter a story that juxtaposes humor and horror for maximum effect.

Holly Black’s “Ten Rules for Being an Intergalactic Smuggler (the Successful Kind)” does just that. A teenage stowaway, Tera, is accepted into her uncle’s pirate crew, where she learns why her parents wanted her to give up her dreams of spaceflight. Before long, Tera’s uncle and the rest of his crew are dead. Tera makes one decision after another that inevitably leads to her encounter with one of the most terrifying creatures in the galaxy.

Yet this is a funny story. “Rule 5 — If your ship gets raided by space pirates and you wind up hiding in the cargo hold, even though you know it’s a bad idea, don’t go poking through the secret cargo.” The bonus “Star Wars” references are particularly entertaining.

Alice Sola Kim’s “Mothers, Lock Up Your Daughters Because They Are Terrifying” contains the most extreme horror of the funny stories. This is the final tale in the collection and the one most likely to be read just before you turn out the lights and attempt sleep. That’s a bad idea. It’s too creepy.

Mini, Caroline, and Ronnie are Korean adoptees and friends living in the United States. Something is missing from their lives, and they think it’s a connection to their roots. With a spell and a bit of blood, they try to summon their real mothers. The thing that decides to join them seems all right at first, but that can’t last, not in a book of monster stories. Their “mother” is devoted, angry, controlling, and dangerous.

In a collection filled with works by award-winning authors, the prize for best human monster should go to Immy in Kelly Link’s “The New Boyfriend.” This is the most sinister tale in the collection because it’s the most likely to come true. Immy lives in a near-future world of robotic, lifelike playthings. Quietly and without understanding, though not without some malice, Immy terrorizes her best friend.

Monstrous Affections walks a path both dark and light in the monster realm. Each story is uniquely told with an engaging premise. The result is a disturbing yet enjoyable romp through the world of monsters.

Andrea M. Pawley lives and writes in Washington, DC, her favorite city in the whole world. She also writes monthly blog posts for Weightless Books, which is owned and operated by Kelly Link and Gavin J. Grant, the editors of Monstrous Affections.

This compelling tale — with a touch of mystery and the emotional weight of memoir — explores sexuality, guilt, and the boundaries of self.