Our Year of War: Two Brothers, Vietnam, and a Nation Divided

The story of the only siblings to serve side-by-side in the controversial conflict. 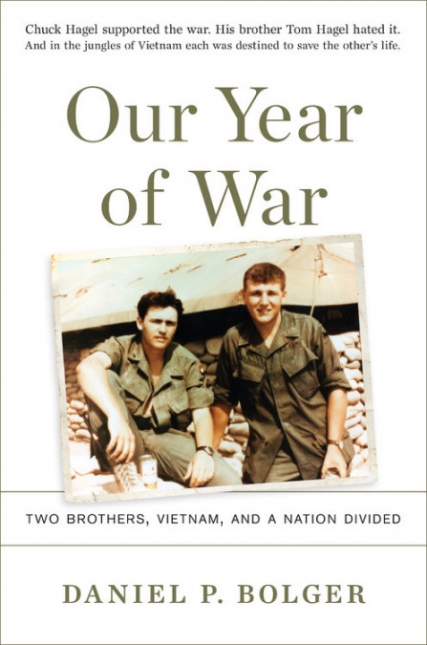 In 1967, Chuck and Tom Hagel, 20 and 19 years old, respectively, volunteered for the draft. Chuck shipped to Vietnam in late 1967; Tom arrived in mid-January 1968. They chose to serve side-by-side in combat as enlisted men.

Both were assigned to the 2nd Battalion, 47th Infantry Regiment, 9th Infantry Division. They were the only American brothers to have served together in the same infantry squad in Vietnam. Both were wounded more than once, each saved the other’s life. Over time, Chuck favored the war; Tom opposed it.

At the end of January 1968, the Hagels faced the Vietnamese Communist Tet Offensive. That was only the beginning. Throughout the year, they patrolled through the bush, looking for “Charlie,” as the Viet Cong were called. They routinely displayed the everyday heroism of infantry soldiers and undertook acts of great courage which led to medals.

The other squad members preferred them as point men — the guys who went first, leading the others through the jungle. “Walking Point” meant taking the out-front and most exposed position as the squad advanced through enemy territory. Chuck and Tom alternated in assuming that most dangerous job.

In July 1968, Tom was on patrol without Chuck when his fellow soldiers were fired upon by a hidden enemy. As Tom later put it, “Somebody had to do something.” He took action. He came up behind the VC guerrilla, and, as Bolger tells it, “The VC turned, his powder-smudged AK barrel coming up. He looked right at Tom Hagel, ten feet away. The American squeezed the trigger once. ‘And I shot him right in the forehead.’”

Graphic stories like this notwithstanding, Our Year of War, ostensibly a narrative on the Hagel brothers, is really the story of the Vietnam War with the Hagels as the centerpiece. The author devotes half his text to the history of the war, along with parallel disruptions erupting back in the U.S. as protestors staged anti-war demonstrations (with race riots ensuing). The result is a thoroughgoing sculptured context for the Hagels’ experience.

Early in the text, General Bolger quotes Mao Tse-Tung’s formula for guerrilla war, which the North Vietnamese were following to the hilt:

As Bolger makes clear, the U.S. military — and especially the commander of the Military Assistance Command, Vietnam (MACV), General William Westmoreland — failed to understand the enemy’s modus operandi. Equally, they didn’t realize that the North Vietnamese were determined to fight to the last man to win the war, a level of commitment far beyond that of anyone in U.S. forces. General Creighton Abrams, who replaced Westmoreland in 1968, changed the military strategy to cope with the enemy’s tactics, but by then, the U.S. population was becoming more and more opposed to the war.

The end result was the withdrawal of American forces in 1973, followed by cutting financial support to the government of South Vietnam and the North Vietnamese victory in 1975.

Bolger does a masterful job of researching and referencing — the footnotes run to 47 pages. He also captures and explains GI slang from the war. He covers “hootch,” “grunt,” “hump,” “boonies,” and many other terms and phrases, including my favorite, “There it is,” meaning “That’s how things are. No use complaining.”

The author spends extended time exploring one of the names we used to refer to the enemy. “Viet Cong,” a Vietnamese term that means “Vietnamese Communist,” was shortened to “VC.” In voice-radio communications, and sometimes in face-to-face speech, “VC” was expanded using the military phonetic alphabet to “Victor Charlie.” Early on, the troops began to refer to the enemy as “Charlie.” When the enemy was especially fierce, the term became “Mr. Charlie.”

Bolger is a retired army lieutenant general with 35 years of distinguished military service. His writing style is casual and irreverent, with plenty of military slang and a few jarring instances of overwriting:

“For a soldier, especially a trainee at Fort Bliss, time could run as slowly as a limp Salvador Dalí clock or as quickly as a hummingbird’s heartbeat.” At times, the reader is given more background than needed, thus overwhelming the central narrative.

The repetition of a disproven assertion, that the Tet Offensive came as a surprise to the U.S. military, is another irritant. As was broadly alluded to in the Burns-Novick documentary, the National Security Agency forewarned that a country-wide offensive was coming. MACV apparently didn’t believe the warning because it took no action to prepare.

Both Hagel brothers went on to distinguished careers after completion of their military service. Tom became a professor of law, and Chuck was elected to the U.S. Senate and eventually became secretary of defense under Barack Obama. But neither forgot Vietnam.

Tom Glenn spent the better part of 13 years in Vietnam during the war providing covert intelligence support to Army and Marine combat units and escaped under fire when Saigon fell. He now has 17 short stories and four novels in print. His most recent novel, Last of the Annamese, called by a reviewer “fiction in name only,” tells of the fall of Saigon.