One Station Away: A Novel 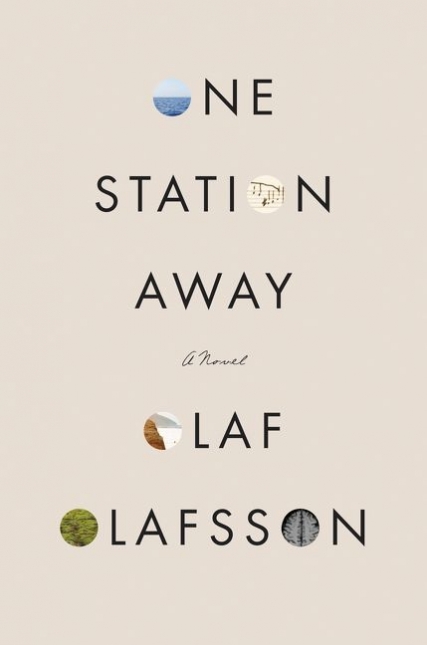 Dr. Magnus Colin Conyngham is a hard man to pin down. So, too, is the novel he narrates. On the one hand, One Station Away, Olaf Olafsson’s fifth novel, is a book that will grab your attention and hold it (easily read in one sitting). There are questions we want answered. As with all good page-turners, we are given hints, glimpses, and partial memories that leave us wanting to understand the bigger picture.

And Olafsson is a master at this subtle withholding of information and swiftly moving tempo, in which brief chapters move back and forth in time, carrying us along smoothly and elegantly, while quietly building suspense. He did it extremely well in his previous work, especially his novels Restoration and Walking into the Night.

On the other hand, there is an elusiveness here that, while fitting for the narrator and his emotional predicament (modern day psychological paralysis, we might call it), left me longing for more — insight, perhaps, or empathy, or at the very least, understanding.

At the opening of the novel, Magnus convinces his colleague to put him in a comatose state for two hours so that he can better understand what his patients might be experiencing (he is a neurologist conducting research on patients who have suffered severe brain damage).

After an initial period of acute anxiety, he thinks he hears the sea, which, although it is near the hospital, he has never heard before: “This time I didn’t despair, but continued to listen for sounds outside the hospital walls — for something I might not have noticed before and which I suddenly thought could mean something to me. It was odd, this strange conviction that I had missed something important…”

Indeed, the entire novel involves us in the narrator’s search for what he has missed or misunderstood. On the surface, he is grief stricken over the recent untimely and mysterious death of his fiancée, Malena, a modern dancer and teacher of dance.

Immersed in his work and exiled from his family, Magnus thought his relationship with Malena would save him from himself — early emotional deprivation has hardened him (much of the time, he seems as lifeless as his patients). When he loses her, he tries to find out more about her life and her death, and begins to question himself about not knowing in the first place.

He rides the train each day from Manhattan, where he lives, to the hospital in Connecticut where he works, and as he tells his story, moving between train stations and back and forth in his mind, he doesn’t seem to know where he is headed or why this perpetual transient state of being, physically and emotionally, has become his way of life.

Almost comically, his father literally doesn’t understand the commute and continually asks his son where he is when they talk on the phone. The family, originally from Iceland, moved to England, where his parents still reside.

Grief comes in other forms, and much of Magnus’ angst stems from his mother, a concert pianist who has been blocked for years, who clearly chose her art over motherhood, and whose difficult temperament and fragile state (read: high maintenance) have frayed the family at the edges.

Just when his mother seems to be finally getting the recognition that she and his father believe she deserves, Magnus becomes attached to a mysterious female patient whom he senses is conscious and trapped in her own body.

While his father’s life revolves around freeing his wife from being underappreciated, unhappy, and always “one station away,” Magnus’ life has also become focused on freeing — freeing his patient from her entrapment and giving her some kind of life. As the novel unfolds, Magnus must face his father’s deception and desperation, his mother’s utter despair, and his own disillusion.

Music is a reoccurring motif: the music of the piano being played by his mother, her recordings being played at the bedside of his patient, the sound of the ocean and the train, and the memory of songs:

“She played the same Chopin Etude for me, which was presently echoing through my apartment: no. 3, op. 10. Although I had no ear for music, I understood that she was trying to comfort me — with notes that expressed her thoughts when she couldn’t find the words.”

Alongside the music are hands, and they, too, are a motif. Hands healing, soothing, playing, searching, and holding. Hands reaching for something that has been missed: “I held her hand until the nurses came down. It was cold and clammy, and I made sure I stroked it gently. On my way to the train station, I realized I had never asked her if she could hear the sea when the windows in her room were open.”

This novel is about many things: love, loss, family, trust, scientific and artistic ways of knowing, and human connection. There are existential questions raised and a sense of moral complexity. But there is so much underfoot that it becomes difficult to grasp the central concern.

We just cannot get close enough to Magnus: there is a flatness in his voice, and even when he tells us how he feels, we simply cannot imagine a heart beating beneath the surface. Like the narrator himself, the novel reaches and reaches, but the connections are never made and the depths of consciousness are never revealed.

Holly Sneeringer’s work has appeared in various places, including the St. Ann’s Review, the Gettysburg Review, and the Los Angeles Review, and was the recipient of A Room of Her Own Foundation’s Orlando Award. She has taught writing at Towson University and the University of Maryland, Baltimore County (UMBC). Her essays about home and garden can be found on her blog, onthresholds.com.