One Plus One: A Novel

A single mom with little money but lots of heart accepts an offer of a road trip and help from a willing stranger. 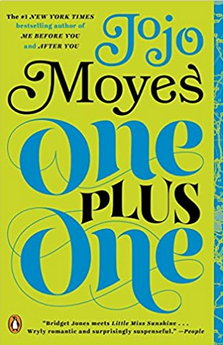 Humans are experts at rationalizing away their bad decisions — desperate times call for desperate measures, etc., etc. When we face truly desperate times, it becomes even easier to make a decision that our hearts tell us is wrong, but our brains figure out a way to justify. But then the consequences come due.

In Jojo Moyes latest novel, One Plus One, the two main characters each have to face the consequences of some not-so-great decisions made during times of desperation — one emotional and one financial. The key to Moyes’ writing is that, even though the reader knows these decisions will haunt the characters, you are still surprised when they must face what their decisions have done to their own, and others, lives.

Jess Thomas is a single mom (though not quite divorced from her deadbeat husband) doing her best to keep her teenage son from being bullied and her math-prodigy daughter on the right track at school, all while keeping a roof over their heads and food on the table.

When her daughter is presented with an once-in-a-lifetime opportunity to win a math competition that would pay for private school, Jess makes some desperate decisions to make things work. And the only way things can work is if she takes her employer up on his offer to drive Jess and her clan to the competition — a three-day journey away.

Why would Jess’ boss, Ed Nicholls, volunteer to drive an employee he doesn’t even know very well, plus her carsick daughter and moody teenage son, such a distance? Well, Ed has made a few of his own desperate choices in the past months that have him facing some pretty big consequences. Is it running away from your problems if you run away with someone else’s, too?

In Jess, Moyes has developed a character who conveys the daily struggles parents face when money is almost nonexistent. She makes it understandable when Jess reaches the end of her rope and makes the choices she does — it’s all in the hope of helping her children have a better life. (One side note: The story takes place in England, which has subsidized healthcare, so medical bills aren’t a factor.) The stark difference between the worries of Jess and Ed is clearly shown in their discussion over what $100 a year means to her family vs. his: eating for a week to his rounding error.

Perhaps because Jess is so well written, her counterpart, Ed, doesn’t seem as fleshed out, especially in the beginning. As his life is unpacked throughout the book, he becomes more fully realized, but many of his details are still lacking. While the reader might intellectually understand why Ed seems to make the worst possible decisions in his love life, for instance, those choices never quite resonate as deeply as Jess’ do.

The story moves along quickly, though some obvious contrivances are thrown in. The magic of Moyes’ storytelling is that you don’t mind at all when another roadblock (or almost ex-husband, or carsick child) is added to the mix, because it allows you to stay with these characters a little while longer.

While readers of Moyes’ previous novel, Me Before You, will be happy to note that there is less (reader) crying in this story, there is not a traditional happy ending for all — but there are realistic ones. Yes, there are consequences for the characters’ actions, but Moyes makes you enjoy discovering them.

Meredith Hurt is a former editor with Harlequin Enterprises, Inc., and currently heads up the patient education and engagement program for the American College of Cardiology in Washington, DC.