A quiet, tender story of unlikely adoption and love’s triumph 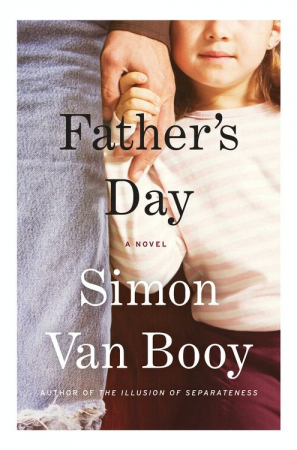 Fashion designer Karl Lagerfeld famously said, “The only love that I really believe in is a mother’s love for her children.” But if Lagerfeld reads Father’s Day by Simon Van Booy, he may start believing in a father’s love, as well — particularly the love a father feels for his adopted child.

Harvey, the young protagonist in Father’s Day, is orphaned when her parents die in a car crash. At 6 years old, her only next of kin is Uncle Jason, a violent ex-con who did time for blinding a man in a bar brawl. But Harvey’s fixation on an old family story about how “Uncle Jason” protected her father when they were children tips off the social worker to Jason’s softer side.

Jason lives a solitary life, fixing motorcycles and selling antiques through his online business. After he’s notified of his estranged brother’s death and the existence of his little niece, a previously unimaginable life as a single father claims him.

Harvey and Jason’s story unfurls over the course of 20 years. Where uncertainty tinges their early months together, the bond that forms is ultimately sweetened by Jason’s lightly fumbled parenting: “When she needed to use the restroom, Jason didn’t know what to do, so they lingered outside the ladies’ room until Harvey was so desperate that Jason had to ask a woman taking her baby in if she would take Harvey too.”

Though she is one of the main characters, Harvey is enigmatic and remains so throughout. Her emotional reaction to her parents’ death, for instance, happens off-stage, resulting in a remote, matter-of-fact viewpoint.

The reader gets much closer to Jason, who weathers Harvey’s unexpected sick days and school-yard anxieties in a way that is both satisfying and immediately recognizable to parents. Author Simon Van Booy avoids sentimentality here, but only with the ever-present threat of Jason’s temper. One such fit of rage during Harvey’s teenage years threatens to undo the life they’ve built: “Harvey is saying something. Jason turns to look at her but sees nothing, hears nothing, only the breath rushing through his teeth and the tightness in his muscles. He gets out of the car, pulls the billy club from his pant leg.”

Trouble could be brewing, too, in a parallel, present-day narrative. Harvey, now 20-something and living in France, invites Jason to visit her in Paris for Father’s Day. She’s planned a series of father-daughter activities and “mystery gifts” that pay homage to him. But Harvey has recently become aware of a family secret, so in addition to thanking Jason for raising her, she’s in search of the right moment to tell him what she knows.

Van Booy writes with restraint in the delicate style of the late Kent Haruf’s Our Souls at Night. This is less effective at the book’s outset, and the tone of the first few chapters plunks along with the eloquence of an outline. Happily, Van Booy hits his stride soon after, where the short, crisp sentences and minimal punctuation evoke Jason’s laconic character.

In the end, Harvey’s secret precedes a twist that brings a remarkable, if somewhat hard-to-believe symmetry to the book. The strength of the novel, therefore, rests not on its plot revelations but in the confident way Van Booy steps aside and asks the reader, instead, to bring emotional intelligence to bear in this delicate love story.

Dorothy Reno is a short-story writer and contributing editor at the Washington Independent Review of Books.