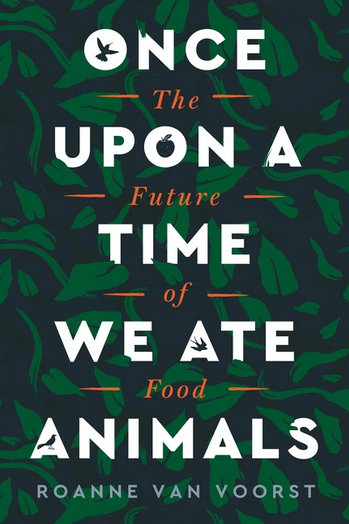 It’s safe to read this book. You won’t find chapter after chapter about the horrors of factory farming and the terror animals suffer during slaughter. A steady stream of facts, yes. But a minimum of digs at meat-eaters, and no diatribes. (Or, at least, none until the very end, when you’re nicely prepared and waiting.)

Which is not to say Once Upon a Time We Ate Animals won’t convince you to give up meat, fish, and dairy, or at least to move in that direction by cutting down.

The author is a notably pragmatic, 29-year-old Dutch anthropologist, Roanne van Voorst. While she does spend some time talking about the cruelties of factory farming, how we’re overfishing the oceans, and the like, it’s in the startling context of explaining why knowing how food animals suffer doesn’t matter when it comes to getting folks to stop eating them.

She postulates that this is because our collective cruelty to these animals is hardly a surprise. While each of us, individually, may not be able to list specific horrors, who among us hasn’t grasped that the lives of the creatures we eat are, at best, unpleasant and unnatural, and their deaths terrifying? Myriad books, TV shows, and documentaries about what happens on farms and in slaughterhouses have been coming our way for decades, right back to 1906, when Upton Sinclair depicted Chicago slaughterhouses in his novel The Jungle.

It isn’t that we lack compassion, van Voorst argues. We humans do feel pity, disgust, and even shame. We turn a blind eye to routine cruelty “not because we don’t care, but precisely because our deep human values are inconsistent with how we treat animals in our time.” In other words, we can’t bear to think about it.

We distance ourselves so thoroughly that, worldwide, we kill 150 million animals (pigs, cows, chickens, goats, sheep, and all sorts of fish and other sea creatures) every day. It doesn’t take a climate scientist to know the world can’t keep doing that.

Climate change is a fact. Livestock is a major contributor to the global increase in methane gas, and some 35 percent of the earth’s surface is farmland. We no longer can afford the massive resources and acreage necessary for raising food animals. This is true across the world and especially in the United States, with its huge meat and dairy production — not to mention the subsequent soil erosion and polluted water it causes.

(An aside: Two charms of Once Upon a Time are the nifty compendiums of citations for just about every other paragraph in the book, and the author’s occasional breakout into blunt speech. An example of the latter: “In 2050, it is estimated that the earth’s population will be nine billion. If people live the same way as the Western world currently is used to doing, we’re all officially screwed.”)

A plant-based diet can prevent the coming changes from being so catastrophic, van Voorst says. Whether we make the shift in time comes down to whether we can convince enough people to eat differently. She points out that thinking about never eating meat again is akin to “imagining a new color.”

But if shaming people because of animal suffering doesn’t work, what about making the case that switching to a vegetarian or vegan diet is better for your health? Van Voorst capsulizes many articles, medical studies, and books that have demonstrated such a change is beneficial, not to mention trendy. She also lists diseases caused or made worse by the consumption of animal products and offers convincing evidence that vegans and vegetarians are healthier than the rest of us.

(While I don’t discount the worth of this chapter, reading it is like spending the night in a medical library without so much as a pillow.)

After presenting all this, the author observes that knowing this stuff will convince a few people to change their eating habits, but not many. Apparently, most of us will read, shrug, and then order a hamburger.

Yes, there are some positive changes going on, diet-wise, but they are so small on a worldwide scale that they don’t count. Just now in Canada, Holland, and (somewhat less so) here, going vegan is “in.” It’s also true that, if stopped on the street, many Americans will say they’re cutting back on red meat. On a national scale, we are indeed eating less beef — but more eggs, cheese, and chicken — annually.

Van Voorst spends markedly less time telling us what sort of persuasion might work than outlining what won’t. Along the way, there is a bizarre chapter about schoolchildren enjoying a trip to a cattle farm because they aren’t shamed for eating meat. (Remember what I said at the start about no diatribes?) The tour guide tells them that we mustn’t scorn meat-eaters because they “don’t know any better.”

The book often presents as a series of un-joined but well-researched chapters. It’s worth reading for the sheer amount of information presented, but its final pages feel abrupt and appear to lack the research invested in earlier sections. There is also a drift toward polemic. Van Voorst again notes that experts predict continuing our current eating patterns will mean cataclysmic climate change. And those shifts, in turn, will lead to famine, poverty, conflict, and climate refugees.

Her educated guess at what will convince us to break our addiction to meat, fish, and dairy is a simple one: We will do it to save our families. (Perhaps in the hope that they won’t be cursing us in 20 years because we couldn’t give up barbecue and shrimp lo mein.)

Ultimately, for all the book’s flaws, van Voorst makes her case. If we want our children and grandchildren to live in a world even remotely like ours, we must eat differently starting “NOW. Not next year. Not in five years when the kids leave, and not when vegan cheese tastes great. Now.”