The Pulitzer winner untangles the complicated racial history of her home state of Texas. 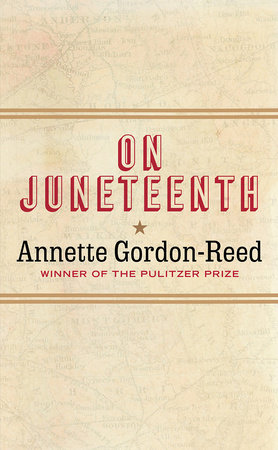 What's up with Texas? Austin, the blue capital of the red state, is named for a Southern slaveholder, the acclaimed “Father of Texas,” who brought 300 families and their human chattel with him to extend the South’s peculiar institution into the area we now call the American Southwest.

The banners honored in the Texas-based Six Flags Theme Parks’ name include two — the Republic of Texas and the Confederate States of America — from entities that sought not only to preserve slavery, but to enshrine it in perpetuity.

And the “heroes” of the Alamo died not to free themselves from despotic Mexican rule, as is often portrayed in our mythology, but, as Mexico was moving toward abolition, to make their newly occupied land forever unfree for the enslaved workers who allowed them to prosper as the plantocracy of East Texas.

In On Juneteenth, Harvard historian Annette Gordon-Reed grapples with the myths and contradictions of her beloved home state — a place that once subjugated, segregated, and lynched Black people (including in her home county) and remains ruled by politicians determined to suppress the hard-won votes of minorities and maintain their own power even as demographics inevitably shift.

In a series of essays, she offers a thoughtful and affectionate meditation on the state in which, despite its dualities, she still feels most at home. Where others might see a simple picture of unreconstructed racism, Gordon-Reed sees — and dissects — complexities that largely defy stereotypes. In so doing, she makes On Juneteenth an important part of the discussion about who and what we are as 21st-century Americans.

Along the way, she dispels such foundational myths as those that equate Jamestown with Plymouth Rock: The former was strictly a mercantile venture, while the latter related to a quest for religious freedom. And throughout, she seeks to communicate a simple truth: Our history — whether in Texas specifically or in America writ large — is complicated.

Juneteenth, however, remains Gordon-Reed’s lodestar. Now on its way to becoming a national holiday, the day takes on new meaning in her retelling of its origins: Texas was where the last Confederate forces surrendered, on June 2, 1865, and where, on June 19, 1865, in Galveston, Union Army Gen. Gordon Granger announced that the Emancipation Proclamation, limited to states still in rebellion and issued more than two years earlier, could finally be enforced to end slavery there.

The author, while still a youngster when Jim Crow laws and traditions were eroding but still in effect, celebrated Emancipation Day along with family and friends in a then-segregated Houston public park on land purchased by and for Black Texans.

Having won the Pulitzer Prize and a National Book Award for The Hemingses of Monticello: An American Family, Gordon-Reed brings her substantial intellect to this intimate exploration of her home state, one she approaches with ambivalence but also love.

The author’s Texas roots run deep, but she chafes at the generalizations applied to the fabled Lone Star State. Her part of East Texas, known as the Big Thicket, with its piney woods and rich, cotton-growing soil, is more akin to other Southern states than to the Southwest, a land of sagebrush and cowboys — the latter itself a racist term, as only Blacks were cow “boys,” while whites were ranch hands. But mythology dies hard.

What, then, underpins Gordon-Reed’s devotion to the place? In the end, she harks back to Thomas Jefferson, whose deeds as an enslaver — expertly chronicled in her much-lauded earlier book — did not match his inspiring words in the Declaration of Independence “that all men are created equal.”

In his 1785 Notes on the State of Virginia, Jefferson wondered how a Black person could love a country that didn’t love him. Why not live somewhere else, free from racial strife? Yet in freeing five of his enslaved people in his will, he insisted they should be allowed to remain in the commonwealth, never mind laws to the contrary. The reason, Jefferson said, was simply because that is where “their families and connections were.”

Gordon-Reed applies this same logic to herself. Texas is where “my first family and connections were…Texas is where my mother’s boundless dreams for me took flight. It’s also where I learned to think that people could, and should, try in whatever way they can, to make life better for those alive today and for those to come.”

She concludes On Juneteenth with a sentiment that could apply to our troubled country as a whole, despite its original and subsequent sins:

“Love does not require taking an uncritical stance toward the object of one’s affections. In truth, it often requires just the opposite…Striking the right balance can be exceedingly hard.”

Gordon-Reed hopes she has achieved “the proper equilibrium.” It’s a worthy goal for us all.