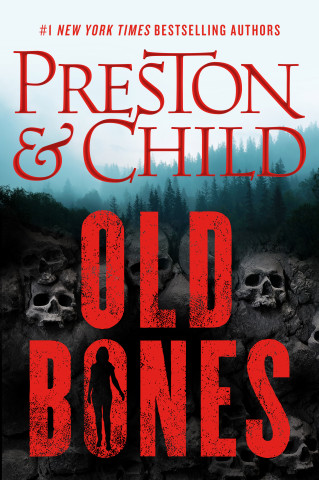 Partners in crime-writing Douglas Preston and Lincoln Child have had an amazing career, both as collaborators and as solo scribes. They are best known for the Pendergast series that reached its 18th installment with the universally praised Verses for the Dead.

In their latest supercharged thriller, Old Bones, they are shifting gears by standing behind a new protagonist, a curator/archaeologist named Nora Kelly. At once youthful and experienced, Nora is strongly attracted by the shocking request of a handsome historian.

Clive Benton needs a team to help him prepare for and execute a startling expedition into rough western wilderness. He believes he has some clues to investigate the fabled Donner Party, a legendary group of seekers who perished via starvation, impossible weather, and violence in 1847.

Benton approaches the Santa Fe Archaeological Institute with his reasonably convincing story about having the key to locating a great treasure of gold coins, a find somehow connected to the Donner misadventure. What he has is the diary of a young woman named Tamzene, who was one of the Donner Party family.

A deal with the institute is made, and personnel from that organization, along with a support team, is set in motion. The authors paint the logistics of the venture in eloquent detail, and they manage to make those plans and details fascinating. The team’s work must be done on a carefully created schedule that considers climate, weather, and just how much horseback riding, mountain climbing, meal-making, and walking can be done in the available time.

The topography holds dangers, as well. Because their search area is federal property, it comes under the jurisdiction of the FBI. And, as readers will find out, that’s a very good thing.

Why? Because it allows for the introduction of another major female character just as engaging as Nora. FBI Agent Corrie Swanson, a self-confessed former “foulmouthed, purple-haired goth,” who is anxiously awaiting the end of her probationary period under the tutelage of Special Agent Hale Morwood.

She yearns to be assigned a real case. Suddenly, she has one, and it brings her into contact with Nora, Nora’s team, and a series of ongoing problems with the Archaeological Institute’s venture.

Not only does it become necessary to understand the long-ago crimes of the Donner Party catastrophe, but it also involves crimes of greed during the troubled present expedition. Given their different personalities and responsibilities, there is a running friction between Nora and Corrie that softens in the late stages of the novel — hinting, perhaps, at some future Preston & Child thriller that will bring them together again.

Meanwhile, Corrie has the death of one of the expedition’s participants to investigate. And there will be more to come. Too bad she must spend so much of her time on horseback, a mode of transportation that gives Nora no trouble at all.

Corrie’s confrontation with Dr. Fugit, president of the Santa Fe Archaeological Institute and Nora’s boss, is a scene that shows Corrie maturing on the job — holding her own against the offensive woman’s fear-mongering manipulation — and not losing her temper.

Like the best of the authors’ joint efforts, Old Bones provides spectacularly drawn settings; lessons in perceiving, collecting, and interpreting evidence; and the testing of talented people against a ticking clock. In this novel, the clock measures the time left before encroaching storms make the completion of the mission impossible.

Though the story of the Donner Party and its gruesome cannibalism has been told and retold, this masterful examination of the perplexing events offers a fresh take that carries meaning for contemporary readers. The launch of the Nora Kelly series is to be applauded. Will Corrie Swanson get her title shot, too?