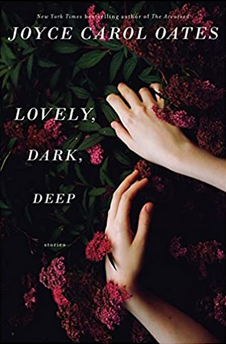 Joyce Carol Oates has always been a favorite of mine — my list of desert-island books would certainly include such Oates’ titles as Because It Is Bitter, and Because It Is My Heart, We Were the Mulvaneys, and Blonde.

Oates writes long, meaty books, and her prolific tendencies have been widely documented. There is a lot to admire in her writing. This collection of short stories, Lovely, Dark, Deep, did not change that for me.

The book starts with “Sex with Camel,” a compassionate tale full of heart. In it, a grandmother and grandson travel to a hospital for the grandmother’s cancer treatment after she is told at another hospital that her case is terminal. The boy waits while she goes in for treatment, thinking of jokes and funny banter they can share on the trip home. He knows it’s hopeless, but they both pretend otherwise.

Familiar Oates themes appear in many of these stories: distance from one’s own feelings, worry about peer opinions, inequality in male-female relationships. In “Mastiff,” a female narrator has been intimate with a man, but hasn’t yet determined her feelings for him. She shares her story from an emotional distance, as if watching from above.

“With her affrighted eyes she saw how others regarded her. A woman slightly crazed with worry, mounting fear. A woman of the sort you pity even as you inch away from her.”

The man, unnamed throughout, takes charge when the two of go on a hike; the woman’s passivity is on display, as she hasn’t dressed appropriately or brought water. Soon, however, he is attacked by a dog. Suddenly, the crisis escalates the emotional content of the relationship, and the narrator begins referring to the man as her fiancé. But is this what she really wants?

That theme of living up to others’ expectations is repeated in “Stephanos Is Dead,” in which the news of a faculty member’s death ripples through a college town: “Angelo Stephanos certainly was beloved. When most of us die, we’ll be lucky to be missed.”

In the wake of the death, the narrator, Mickey, begins to question her own achievements and status in the community. The story takes a twist when Stephanos’ widow accuses Mickey of sleeping with the deceased man — thereby casting his impeccable virtue into doubt.

Just as in her Marilyn Monroe novel, Blonde, Oates, in the title story of this collection, takes on another beloved American icon — Robert Frost — rewriting his history with realism and shocking truths.

The poet is interviewed by a “third rate poetry magazine” reporter named Evangeline Fife. She starts off with questions Frost has heard many times — simple and predictable. He leans back in his chair, anticipating the easy acceptance of the Robert Frost myth.

But quickly, the queries take a turn. Fife claims Frost’s poems are filled with images of blackness and destruction — a yearning to die. “An American poet who sees and defends the very worst in us, without apology.”

In the story, Frost asks Fife about her underwear. It is jarring and uncomfortable, and you can imagine Oates having a great time shocking her readers, just as the character Frost is shocked by the interview.

Oates’ stories are also dark. In “Patricide,” daughter Lou-Lou is jealous that her father gives the attention she is so desperate for to his many female conquests instead. She is half a person, successful in her professional life but stunted personally as she struggles to be everything her dad wants.

She remains a virgin in middle age and eventually loses her job. Following her father’s death, Lou-Lou becomes heavily entangled with the young woman he was planning to marry. There is no hope that she will overcome her father’s stunting legacy. It’s too late.

Oates’ short stories are captivating, sad, compassionate, and haunting. They continue to capture the uncertainty, hurt, and darkness in all of us. Her fertile mind is our gain.