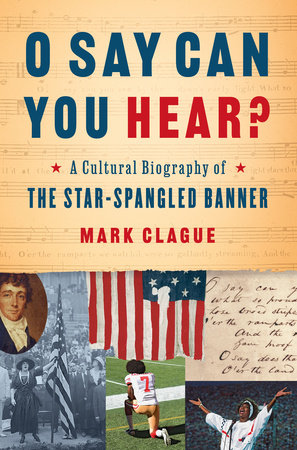 In the chaotic climate of present-day America, where patriotism and protest eclipse one another at turns, the playing of our national anthem is increasingly a political act. But according to Mark Clague, professor of musicology and American culture at the University of Michigan, the anthem was always political and still poses a fundamental question: What does it mean to be American? In O Say Can You Hear?: A Cultural Biography of the Star-Spangled Banner, Clague provides a nuanced response that illuminates the anthem’s legacy and its powerful ability to continually unite — and divide — Americans.

Over two centuries, “The Star-Spangled Banner” has become “deeply ingrained in the American experience” through patriotic performances, parody, and protest. The legend of Francis Scott Key and the creation of his hallowed song, however, contained “as much fantasy as fact,” Clague claims. Indeed, the fact it eventually became the national anthem at all, sung by millions of people over generations, “would have amazed Key.”

During the War of 1812, Key, a prominent lawyer, traveled to Baltimore to secure the release of a high-profile American prisoner. On the way home, they were captured by the British fleet and transferred to an American “truce vessel,” from which Key witnessed from afar the bombardment of Fort McHenry on September 13, 1814. Seeing the American garrison flag still flying the morning after, Key took several days to pen the words that became the nation’s musical symbol of freedom.

Clague provides a rich, keyhole history of Key and the anthem’s creation, clearing up many misconceptions along the way. For instance, Key’s creation was not born fully formed in a burst of blazing inspiration, like Athena from Zeus’ head. Rather, it was a work of at least three days and borrowed music already written by someone else. According to Clague, the “broadside ballad or newspaper ballad” — where lyrics were written to a popular tune already making the rounds — was ubiquitous during Key’s age.

These ballads were a form of commentary on current issues and events fueled by emotion rather than fact. Written during America’s second war with Britain, Key’s ballad belied the current situation the young nation found itself in: While the song “paints a picture of a united, pious, and powerful nation…in 1814, none of these propositions were true.” Clague sharply observes that the literary devices Key employs, such as the use of particular pronouns, reveal his political intent in the song:

“His language recruits both singer and auditor into the construct of nation. The most important word of the lyric may well be the opening ‘you.’ It brings the auditor into the story and into dialogue with the lyric, asking a question — ‘O! say, can YOU see?’ It thus initiates a personal relationship to the lyric’s patriotic proposals.”

From there, the lyrics move from “you” into “we” and finally “us,” as Key’s song offers “a story of political manipulation and construction — it does not simply observe a nation triumphant but works to build one, assembling individuals into a unified whole.”

The many delights in Clague’s eclectic study of “The Star-Spangled Banner” center on the musicality of the anthem itself. A musicologist, the author expertly dissects the arcane origins of the melody (known as the “Anacreon,” composed by Englishman John Stafford Smith around 1773) the lyrics are set to, as well as its countless lyrical variations over the centuries.

People without a music background may not understand the “extraordinary ambition” of the melody, but Clague is a deft guide as he explains how the low notes contrast with the anthem’s dramatic midpoint, where “the tune makes a surprising but vital upward leap. Rising to unusual heights, it demands exclamatory energy from its singer.”

Beyond the anthem’s origin story is the broader cultural impact of the song on the nation. A recurring refrain throughout Clague’s study is that “The Star-Spangled Banner” became the national anthem not by law but through extended use and custom. One of the uses of the song that has “repeatedly galvanized and deepened its role as a symbol of the nation has been [during times of] war.” “The Star-Spangled Banner” marched into battle for the first time during the Mexican-American War in 1846. From there, it experienced an “inflection point” in its history and symbolism during the Civil War, when its “invocation of the ‘land of the free’ took on new meaning.”

The most enlightening and entertaining chapter — in a book structured around chapters that can be read non-chronologically — answers a question most people new to the nation might inquire about: Why is the national anthem played before sporting events? In “Play Ball!” chockablock with anecdotes and little-known facts, Clague shows how World War II, which elevated the temperature of America’s patriotism, led to the anthem preceding every game. He deconstructs the ritual and ceremony of the rising for the song, the hand over the heart, and the role of military personnel attending, while eloquently limning the meaning behind these customs:

“The ritual’s pedagogy teaches everyone how to be American…Loyalty is rehearsed. In song, nation and sport reinforce the patriotic credibility of one another in sonic circularity. Community arises without the need for a handshake. The ceremony instills a belief in patriotic unity that transcends place, space, and time…The sheer success of the game-day anthem is signaled by how little its participants know or even care to know about its history. Tradition is all that matters.”

The variety of performances of “The Star-Spangled Banner” (which officially became our national anthem in 1931) also makes for fascinating reading. Clague’s note-by-note analysis of Whitney Houston’s performance at Super Bowl XXV in 1991 raises nearly as many goosebumps as did Houston herself: At “‘And the rocket’s red glare’” — Houston’s voice opens up, delivering the powerful, illustrative lines of Key’s lyrics as vocal fireworks…She is radiant.”

Clague doesn’t sidestep the thornier issues with America’s “beloved” anthem, however. In his chapter “The Anthem and Black Lives,” he wrestles with our current troubles around the anthem and what it represents to people of color. Spotlighting the controversial kneeling of NFL quarterback Colin Kaepernick during the anthem, a form of silent protest, Clague explores the sometimes-contradictory messages the song poses for marginalized people, immigrants, and others struggling to pursue happiness in the “land of the free.”

O Say Can You Hear? is a deeply felt and meticulously researched study that all Americans should read and linger over. Understanding the anthem is “to know its fantasies and flaws…its dreams of future possibility.” Calling the song “an invitation to citizenship,” Mark Clague’s book repositions “The Star-Spangled Banner” as a symbol of hope that continues the ongoing conversations we have with the nation and each other about what it means to be American.

Peggy Kurkowski is a professional copywriter for a higher education IT nonprofit association by day and a major history nerd at night. She writes for multiple book review publications, including Publishers Weekly, Library Journal, BookBrowse Review, Historical Novels Review, Open Letters Review, Shelf Awareness, and the Independent. She hosts her own YouTube channel, the History Shelf, where she features and reviews history books (new and old), as well as a variety of fiction. She lives in Colorado with her partner (quite possibly the funniest Irish woman alive) and three adorable, ridiculous dogs.