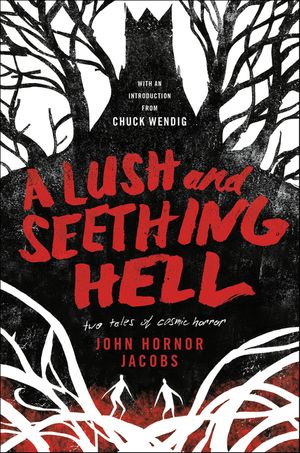 Adjectives are powerful. While verbs describe action, and nouns give a sense of what’s involved in that action, adjectives tell the readers how to feel — a delicate balancing act that, when done right, infuses the imagination with emotions.

John Hornor Jacobs’ A Lush and Seething Hell: Two Tales of Cosmic Horror does an excellent job of living up to the adjectives in its title, and its melancholic yet energetic style will leave readers reluctant to put it down — though it certainly won’t help them sleep at night.

From the opening paragraph, it’s clear Jacobs is not going to go easy on us. “I can recognize a Mageran in any city of the world,” reflects the protagonist, a refugee from a fictional, war-torn South American country. “Violence leaves its mark, and horror makes siblings of us all. A diaspora of exiles, dreaming of home.”

This is merely the first of many instances where Jacobs shows his expertise at blending the mournful with the brutal. Throughout “The Sea Dreams It Is the Sky,” the first of the book’s two tales, Mageran exiles dream about returning to their country despite the dangers that await them there. One can almost feel the visceral, inexorable tug pulling them homeward despite their own best efforts.

When the protagonist’s friend, the mysterious and arrogant “Eye,” tells her he is going back to Magera, she protests.

“‘Still. I must go. I am old and have nothing to lose,’ he said. His brow furrowed, a craggy landscape. Thoughts crossed his features, like the surface of a dark, silted river, hiding danger beneath. ‘My daughter is there. She would be grown now. She might still be. And I fled. At some point every exile must return home.’”

No less complex a story confronts us in “My Heart Struck Sorrow,” a soulful Southern ballad of creeping insanity chronicling a musical ethnographer’s journey into America’s heartland in the early 20th century.

As Harlan Parker, under the auspices of the Library of Congress, “make[s] assay of the secular folk musics of West Virginia, Kentucky, Tennessee, including the Mississippi River Valley, and the Ozark Mountains,” his field journal reveals a gnawing sense of madness curling around the edges of his sanity, which seems to be constantly worn thin by liquor and visions.

“Something grew in me as he sang in the failing light. Some sense of order, descending. It’s said that music is a ritual with the power to transform both the singer and the listener. As he sang, Steck’s stature grew in my mind, his mouth became cavernous and dark, and I felt a heaviness descend on me. Hairs stood up on my arms, and I looked at Bunny and Vester, who both seemed enthralled by Steck’s music.”

Reading Parker’s journal and piecing together the broken bits of his own reality is Cromwell, a grieving parent and widower who buries himself in uncovering Parker’s life’s work. Guilt-ridden and heartbroken, Cromwell falls into a pattern eerily similar to his subject’s: Obsessed with the acetate recordings Parker made during his travels, Cromwell falls to playing them as he retraces Parker’s movements via the diary.

After reading about a particularly disturbing episode deep in the woods, Cromwell seeks out the corresponding acetate and plays it back:

“A faint crackling begins to sound. The familiar preamble of vinyl.
Then the sound of a woman’s voice.
What first sounds like a scream becomes…
Laughter.
It’s an indeterminate voice — not with the rough gravel and distress of the aged, but not a youthful timbre, either. Closing his eyes, Cromwell can see her white hair, her gnarled feet.”

And just like that, the present crosses paths with the past. By dancing around the outer edges of a mystery — by showing us that a tender bruise can be as painful as a fresh cut — Jacobs achieves a chilling mental picture.

If there is a weakness to this second story, it is the sections told through Cromwell’s eyes; they move slowly, especially in comparison with Parker’s adventure-style writing. Readers may find themselves skimming over those and will miss little.

Overwhelmingly, however, A Lush and Seething Hell is gripping and hauntingly evocative — a great read for fans of fantasy, horror, and everything in between.

Mariko Hewer is a freelance editor and writer who works as a communications specialist at a global health nonprofit to support her beagle’s expensive kibble habit. She is passionate about good books, good food, and good company. Find her occasional insights of varying quality on Twitter at @hapahaiku.