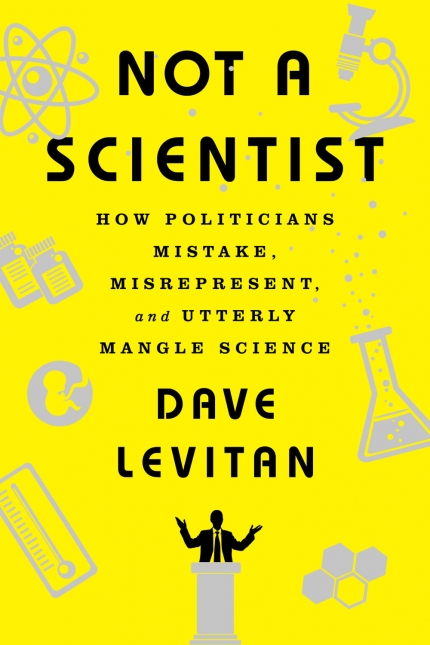 The title of Dave Levitan’s Not a Scientist comes from a speech given by Ronald Reagan in 1980. Reagan was addressing a major environmental concern of the time, acid rain, which is caused in part by sulfur dioxide.

“I’m not a scientist,” Reagan admitted in his folksy way, and continued: “But I just have a suspicion that that one little mountain out there [Mt. Saint Helens] has probably released more sulfur dioxide into the atmosphere of the world than has been released in the last ten years of automobile driving or things of that kind…”

The facts were otherwise, but that hardly mattered. With his canny bit of syncrisis, Reagan had essentially admitted that he considered facts unimportant, or anyway less important than his own “suspicion.” In effect, Reagan’s phrasing established a contrast between science and common sense.

Who you gonna trust, he might as well have said — those snooty folks in the white coats? Or decent, levelheaded people like me?

Levitan sees Reagan’s trope as a hallmark of science denialism, a rhetorical license for unrestrained flimflam. “I’m not a scientist,” a politician begins, and goes on to butcher scientific knowledge in whatever way suits his purposes. Sometimes the speaker cites a scientific claim but muddles or distorts the facts. Sometimes the speaker presumes to speak for the scientific community, but only cites maverick or disreputable sources. And sometimes a speaker says things so nonsensical that concepts like truth or evidence hardly apply.

All these tricks have one thing in common: they subordinate the long-term interests of scientists to the immediate needs of politicians. Those who value science must be alert for such deceptions, and for the caveat, “I’m not a scientist,” that so often precedes them.

As a guide for the perplexed, Levitan offers a taxonomy of common ways in which politicians undermine science — “a catalogue of swindles and perversions,” to borrow a phrase from one expert in political perfidy. Among these are such familiar intellectual errors as cherry-picking and oversimplification, ad-hominem arguments that demonize people who make unpopular claims, and old-school political maneuvers like insincere flattery or stealing credit for others’ accomplishments.

Levitan’s powers of classification are sometimes strained by the breadth of his subject. Politicians are mistaken or disingenuous so often, on so many subjects, in so many ways, that a full account of their foibles would become a general study of human nature. He often strays from covering the misrepresentation of scientific research into exposing legislative tussles and everyday chicanery.

One of Levitan’s case studies, for instance, concerns Robert Lucas, a man imprisoned for illegally building apartment complexes on Florida wetlands. Levitan describes how Lucas’ story was sensationalized by cynical politicians, who used it to level cheap attacks on the EPA.

The case has some bearing on scientific issues, like the study and conservation of wetland environments, but most of the facts Levitan checks here are legal ones: the length of Lucas’ sentence, the laws under which Lucas was charged by federal prosecutors, whether or not Lucas was subject to any civil lawsuits, and so on. (Many politicians are trained as lawyers, but that doesn’t keep them from mangling legal matters as badly as scientific ones.)

Still, any book covering both science and politics is bound to get a little bogged down in policy. As a primer in the sins of spin, Levitan’s list looks hard to beat. I particularly recommend chapter six, which shows how politicians dismiss groundbreaking research by describing it in deliberately silly language — a ploy that can be used by cynics and simpletons to mock almost any pursuit. (Ya hear about that guy Newton? Spent all this time trying to prove how if you drop something, it falls on the ground. What a dope!)

Is that fair? A reviewer ought to admit his biases. I think liberals can be overeager to declare scientific questions “settled.” And garbling complex research is a universal tendency. But overall, I’d say Levitan has chosen his targets well.

If anything, he’s too generous. He refrains from probing politicians’ intentions, looking instead at the substance of their claims. That’s a revealing omission. What’s striking about the enemies of science is that they talk mostly about intentions, while scientists prefer to talk about probabilities.

A scientist asks, in all earnestness, “How likely is it that humans are warming the atmosphere?” An enemy of science asks, “Why should we trust what scientists say? They could all be deranged by groupthink, or corrupt tools of the government, or perpetrating a giant hoax.”

Maybe we should ask the question scientifically: “How many scientists are likely to be deranged, corrupt, or hoaxers?” That’s a tricky question. It would take an excellent scientist to answer it.

Nick Wolven’s writing has appeared in The Year’s Best Science Fiction & Fantasy 2016, Asimov’s Science Fiction, the New England Review, and many other publications.