Disciples: The World War II Missions of the CIA Directors Who Fought for Wild Bill Donovan 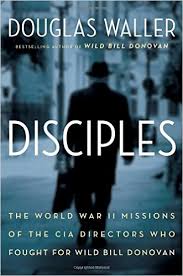 In my spy days, all of us were all passionately circumspect about our work. We never referred to CIA by name, calling it “the agency,” “Christians in Action,” or “Cass Timberlane” — a play on a pseudonym, CAS, “classified American source.” Personal names of people in the business and operational code names never crossed our lips.

Now, for the second time in a year, I’ve been called upon to review a book chockfull of personal names and operations codes — out in an unclassified book for all to see — known to me personally from my intelligence career. Earlier this year, I reviewed David Hoffman’s The Billion Dollar Spy and was shocked to find such names naked in public. And here they are again.

Douglas Waller’s Disciples details the careers of four men who worked under Wild Bill Donovan, chief of the Office of Strategic Services (OSS) during World War II. Each went on to become the director of Central Intelligence, heading CIA and overseeing the entire intelligence community of the U.S. government. I met three of the disciples personally and worked under the broad guidance of the fourth.

The book’s prologue is set at the funeral of Wild Bill, February 11, 1959, in St. Matthew’s Cathedral in Washington, DC, where, incidentally, I was married two years later. Three of the four disciples — Dulles, Helms, and Casey — were in attendance. The fourth, Bill Colby, who was newly arrived in Saigon as CIA’s chief of station, had visited Donovan at Walter Reed just before his death.

Next comes the early history of each of the four disciples. They were profoundly different from one another, but they shared a devotion to the craft and unquestioned patriotism so ardent that it led them at times to violate the law. I respected all four, even the ones I didn’t like.

The first was Allen Dulles, the only one I never met. He headed CIA from 1953 to 1961. From an aristocratic family and well educated, he ran the OSS operation in Bern, Switzerland, during World War II and provided a steady stream of mostly reliable and usable intelligence on the Nazis. He is arguably best known for Operation SUNRISE, which led to the Nazi surrender in Italy some days before Germany’s full capitulation in 1945. A poor administrator but fierce operator, he was not popular with his subordinates in Bern or at CIA headquarters.

The son of an army officer, William Colby spent part of his childhood in China and later went to Princeton with time off in France to learn French. During the war, he parachuted into France to help the French Resistance and later headed commando missions against the Nazis in occupied Norway. He was CIA director from 1973 to 1976. I first met him when he was the chief of the CIA office in Vietnam in the early 1960s.

Bill Casey was, like his revered boss, Donovan, from a family of poor Irish-Catholic immigrants. He oversaw the penetration of Nazi Germany in late 1944 to radio back intelligence to advancing Allied forces. As the director of CIA from 1981 to 1987, he was the one disciple who knew me well enough to call me by name. I remember how hard he was to understand because he mumbled, a particular problem for his boss, Ronald Reagan, who was hard of hearing. Waller’s history of Casey told me for the first time why his speech was marred: He suffered from a throat malady.

Waller provides considerable detail about each of the four disciples during World War II, less about their work during the Soviet period from the 1950s to the 1990s. Each worked hard to grow and protect CIA, sometimes skirting legal limits — Helms was eventually convicted of lying to Congress, and Casey indelibly stained CIA and President Reagan as the architect of the Iran-Contra operation.

Waller is at his best when he relates history, especially of World War II. Among facts new to me was that 60 million people died during that war. Waller doesn’t scrimp in describing the savagery of many of those deaths. Disciples is valuable for that reason alone — maybe Americans will become more sensitive to the gruesomeness of war and less willing to rush into it.

I noted that two aspects of World War II get almost no attention in this book: the Pacific Theater and signals intelligence. Both are omitted because none of the protagonists was involved in either. Even so, both were major aspects of the war. And the U.S. and British breaking of the Nazi machine cipher, a major contributor to the Allied victory, is mentioned only in passing.

The book lacks nothing in scholarliness: At the beginning are six pages of “Cast of Characters.” At the end is a 12-page bibliography starting with three pages of “Manuscript Collections” — archives, presidential papers and libraries, and university and institutional libraries such as the Library of Congress, the U.S. Army Military History Institute, and the National Archives. Following are 97 pages of “Source Notes” — really footnotes without superscripts in the text.

The history of CIA and the intelligence community’s gradual conversion to acceptance that it was bound by the laws of the U.S. was, for me, the most fascinating part of the book. I can recall in my early days the overall sense that intelligence was above and beyond the law of the land simply because it was necessary. Congress was seen as an unwelcome interloper; congressmen were not cleared and were untrained in handling sensitive information.

By the time I left the business in the 1990s, that attitude was all but gone. It had a brief resurgence during the George W. Bush administration — when torture and other abuses were practiced — but the evidence so far unearthed suggests that the administration, not CIA, was guilty of ordering practices prohibited by law.

The writing is for the most part first class. The reader usually sails along without stumbling. On the other hand, Waller occasionally writes sentences that forced me to go back and read again — nothing actually wrong, but hard to follow. For example, from page 179: “He was no-nonsense like his two new comrades and Colby thought skilled at operating a radio, their lifeline to London.”

In sum, Disciples is a worthwhile look at four men who made U.S. history. I am especially gratified to see the craft of intelligence honored for the invaluable contribution its practitioners have made.

Tom Glenn, author of 16 published short stories and three novels, worked in intelligence for 35 years and escaped under fire when the North Vietnamese captured Saigon. His most recent novel, The Trion Syndrome, has just come out. His fourth book, The Last of the Annamese, set during the fall of Saigon, may see print as early as next year. Click here to read a recent interview with Tom, and here to read a review of The Trion Syndrome.