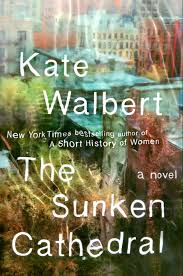 Having to read footnotes, Noel Coward once famously remarked, resembles having to go downstairs and answer the door while in the midst of making love. Had Mr. Coward lived long enough [1] to read Kate Walbert’s stunning, elegiac novel, The Sunken Cathedral, he may have reconsidered his position.

The Sunken Cathedral is filled with footnotes; one might even say it’s drowning in them, in the same way that New York City is slowly being consumed by its watery surroundings in the novel. But Coward’s metaphor does not apply here. These footnotes are more like appetizers that arrive sporadically during the course of a meal. It’s a little unusual and perhaps a trifle annoying to have a seared sea scallop appear while you have a mouth full of steak. Then you taste the scallop, and all is forgiven.

The footnotes in The Sunken Cathedral do divert the reader’s attention, sometimes for pages at a time. This would be a problem if the book were plot-driven, but plot is secondary to Walbert. The story, such as it is, revolves around two elderly widows, Marie and Simone, living in Chelsea, a gentrifying [2] neighborhood in Manhattan. They decide to take a painting class run by an equally old, eccentric instructor, Sid Morris.

Other characters enter and depart the narrative randomly; their ties to the two widows are mostly tangential, though all the characters have some link to Chelsea. An unnamed movie star lives in the building behind Marie. Helen is the star student in the art class, fond of painting apocalyptic scenarios that involve the rising sea. Elizabeth and her family are Marie’s tenants. Dr. Margaret Constantine is the interim head of the progressive school that Elizabeth’s son, Ben, attends. Bernice is the secretary of that school. And so on.

The novel dips into these various lives for revelatory episodes. The reader learns of Dr. Constantine’s estranged daughter; sees how Elizabeth met her husband; and witnesses an exchange between the movie star and his architect, whom he has come to hate. The footnotes are sprinkled throughout the narrative and used for multiple purposes. Many of them involve memories [3]. Some reveal additional information about certain characters. One character has the bulk of his life (and death) confined to a footnote.

The resulting palimpsest — characters and their memories laid upon one another without clear distinction — creates a sense of halting commune. Here are Dr. Constantine and Bernice having a drink together, trying to make sense of an odd encounter at the school:

“‘Anxiety then,’ Bernice says. ‘The curse of the twenty-first century.’ She would like to bum a cigarette off someone but remembers no one is allowed to smoke. Maybe that’s the problem now: Everyone needs a cigarette.”

At least, everybody in The Sunken Cathedral does. Something to distract them from their regrets or failings or, as Bernice suggests, anxieties. Human consciousness here is more curse than blessing. We cannot control the rush of our own thoughts and memories any more than we could control the surging tide from the sea. And in the end, almost all of it is meaningless: a speck of spit in the ocean of existence. Or in Walbert’s words: “Time will pass as time will pass.”

Walbert’s style calls to mind the work of John Banville [4]. Characters drift in and out of the narrative, memories are explored but not explained, and you’re never entirely sure what’s going on. This can be frustrating at first, particularly in a world where Google and Wikipedia render everything “knowable” in the time it takes to type a question. But the patient reader is rewarded handsomely by The Sunken Cathedral. Like the water rising all around us, Kate Walbert’s novel is a bottomless beauty.

[1] He died in 1973 at his home, Firefly Estate, in Jamaica.
[2] One might say gentrified, but that suggests the process has been completed. Walbert’s Chelsea exists in an endless cycle of renewal. The gentrifying will never end, depending on your perspective.
[3] The best footnotes, to this reader’s mind, are the ones that depict Marie’s childhood in France. Marie survived World War II as a young woman, though the details of how she did and what exactly happened to her family, are appropriately hazy.
[4] Thankfully, with Walbert’s limpid prose, you don’t need a dictionary for every paragraph, as you sometimes do with Banville.

Eddie Joyce is author of the novel Small Mercies.