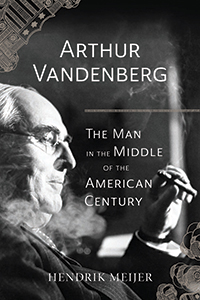 If the name Arthur Vandenberg doesn’t mean anything to you, you’re probably not alone. Vandenberg was a prominent Republican politician in the first half of the 20th century credited with helping to create the United Nations, NATO, and other U.S.-led international entities following WWII. These entities created the world as we know it today.

What makes his story remarkable is that Vandenberg, a conservative Republican, had spent most of his political life as an isolationist, believing that America should not become involved in foreign entanglements. He was not alone. Most conservatives, especially Republicans, felt that way and used the failure of the League of Nations following World War I to justify their position.

In Arthur Vandenberg: The Man in the Middle of the American Century, Hendrick Meijer sets out to tell Vandenberg’s story, and if you are the type to spend an afternoon by the fire reading the fine details of Republican insiders in the 1930s and 1940s, this book is for you. If you’re not, you might find it a bit of a slog.

Vandenberg was a native of Grand Rapids, Michigan, in the days when 40 trains a day came through on their way to places like Chicago or Detroit. It was what Meijer calls a “burgeoning metropolis” where Vandenberg’s father was a harness maker.

Arthur was born in 1884, one year after the financial Panic of 1883, which coincided with the collapse of the harness business. As with many men and women of achievement, the family’s trauma seems to have had a lifelong effect on young Arthur.

In 1900, he found himself a six-dollar-a-week job at the Grand Rapids Herald, cutting and pasting stories from other newspapers. Six years later, just shy of his 22nd birthday, he became its editor. He used the paper as a platform for his ideas, which conformed to the generally conservative Midwestern opinions of the day. His editorials brought him notice, particularly in political circles.

He was an admirer of Theodore Roosevelt and Alexander Hamilton, an odd mix given Roosevelt’s foreign adventures and Hamilton’s warnings about foreign entanglements. He wrote two poorly received books about Hamilton. His opinions and his voice at the Herald saw him rise in the Republican Party in Michigan and, by 1928, he was in the United States Senate, where he remained until his death in 1951.

During those years, he both supported and opposed the New Deal policies of Franklin Roosevelt, occasionally finding himself outside Republican orthodoxy but mostly standing with the GOP and against what were seen as dangerous, liberal Democrats led by FDR.

But his real contribution to the world we live in today was his move from isolationist to internationalist. And this is where the book shines. Meijer gives the reader a day-by-day account of how the political forces at home were addressing the world to come as American and allied forces were defeating the Axis powers.

The discussions began while the war was still raging, and they broke into two camps: those who believed America had to lead an alliance of our allies and those who felt the nation should retreat into Fortress America and hide behind the wide oceans that had always protected us from foreign aggression.

Roosevelt was on the side of the internationalists but was reluctant to offer a specific plan for what would become the United Nations. Republicans were divided, sometimes bitterly. Vandenberg, the old voice of isolation, gave a landmark speech on the floor of the Senate in January of 1945.

“We do not only have two wars to win,” he said, “we also have yet to achieve such a peace that will justify its appalling cost.” America faced two choices. The old way, isolationism, had been his cause. The new way recognized a new reality. “Our oceans have ceased to be moats which automatically protect our ramparts.” He proposed “maximum American cooperation, consistent with legitimate American self-interest.”

The speech appeared to reflect what most of America believed: that the war had produced a new international reality that this country could lead in cooperation with other nations. The clock had turned to a new era.

Vandenberg’s words sent a shockwave through the Republican Party, one that still resonates today in speeches about the evils of internationalism, the United Nations, global warming, and other hot-button issues.

The birth of the United Nations was difficult. The Soviet Union, under the hard leadership of Joseph Stalin, made demand after demand, proposals that would give it what the U.S. and its Western allies saw as an outsize influence on world affairs.

In the late 1940s, the Soviet Union used its veto power in the U.N. to block nearly every proposal from the United States. Britain was broke, Germany was devastated, France was embroiled in political chaos, and the Communists were on the rise. Vandenberg became a champion of the Marshall Plan to rebuild Western Europe and helped move it through Congress. He was an early supporter of the North Atlantic Treaty Organization, which gave cover to the U.S. to protect Western Europe from aggression.

In the end, Arthur Vandenberg became a strong supporter of American leadership in the post-war world, having abandoned his isolationist inclinations even in the face of criticism from leaders of his own party.

This book is a valuable resource for students of the mid-20th century and how those years shaped the world we live in. It offers an inside look into how our world was remade and offers insight into the political arguments still raging today.